Austal USA is building, and they ...

With a company built to build speed, one would expect a non-stop flurry of activity to be the hallmark of the manufacturing facility.

Upon coming to Mobile, Ala., in early August to visit Austal USA, a slow, steady stream of new employee applicants was the defining moment.

Early for an appointment with new CEO Alan B. Lerchbacker, I sat in the lobby and watched in amazement as one job applicant after another walked through the front door. Make no mistake, Austal's ultra-modern shipbuilding shed and its ubiquitous new leader leave an indelible impression. But that steady stream, particularly in the face of what many describe as a "down" market, was most impressive.

The jobseekers come to Austal USA for good reason, as the company is in expansion mode. Flush with success in wooing military and commercial buyers, the company is not sitting on the capabilities of its current building "shed" — which is one 262-ft. (80-m) boat or two 164-ft. (50-m) boats per year — and has invested $8.2 million for the construction of a new 426-ft.

(130-m) boatbuilding shed to flank the current one.

With two sheds, the company expect to support a base of 580 employees, and as Bill Pfister, vice president of marketing and administration simply put it "As soon as this shed is filled, a third one will go up." The current goal: 2,000 employees in four years, with a slight majority of business coming from the commercial side. — Greg Trauthwein 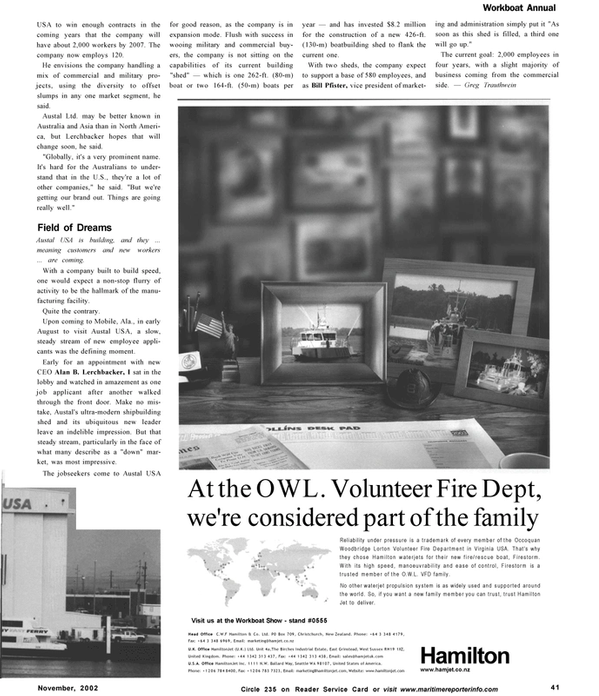