For more than 175 years, Columbian Rope Company has continued to be a driving force and a leader in the rope and cordage industry. During Columbian's existence, a goal of excellence has been achieved, as evidenced by the rate of repeat clients, who continue to inquire about Columbian's products.

With four locations (two in the U.S. and two in Mexico), Columbian Rope enhanced its product base when earlier this year, it became a member of Chicago-based Unicord International — a member of the Unicord Companies.

How Did This All Start?

Throughout his travels Metcalf managed to purchase the Osborne Implement Co., an 80-year-old manufacturer of Farm Implements and Bailer Twine.

Several years later, Metcalf would use the Bailer Twine operation as a springboard into the rope industry, thus finding Columbian Rope Company.

After buying new, modern equipment and a facility upgrade, the plant that Metcalf had purchased just 10 years earlier had expanded to 1,000,000 sq. ft.

and was now producing both twisted manila and sisal ropes; while cutting back on the twine business.

Despite the hard times of the depression during the 1920's and 1930's, the business kept pace and at the start of World War II, geared itself for wartime production. As natural fibers became more difficult to obtain, in order to get fiber for manila rope, Hemp plants were grown on farms in the Middle West and hauled to New York. The discovery of Nylon Synthetic fiber in the late 1940's coupled with Polypropylene in the 1950's caused a turnaround in product.

Bailer Twine was therefore discontinued to provide space for extruding polypropylene, while the implement portion of Osborne was sold to International Harvester and relocated.

In 1965, Columbian purchased the Plymouth Rope Company, which ended Columbian's expansion program. Business grew and during the mid-1970's, Columbian's focus was a mix of 50 percent natural and 50 percent synthetic rope.

Following a decision that was made to cut back on space, the Sisal production was therefore relocated to Haiti, while the Manila portion went to the Philippines.

The original plant in Auburn was shut down and the building sold - but not before a 225,000 sq. ft. adjacent building was acquired — all devoted to cordage.

During the next few years, competition and imports caused a downturn in the general business and a decision was made to move from Auburn, N.Y. to a more economical business climate. A diligent search turned up space in Guntown, Miss. Named for a prominent gunsmith who lived in the area during the early 1800's, Guntown became the new home for Columbian Rope, where the company continues to serve its many customers.

Early in 2002, the Management and Board of Columbian Rope decided to put the company up for sale, keeping in mind the importance of a commitment by the new owners to continue the great traditions of Columbian Rope.

Chicago-based, Unicord International, a member of the Unicord Companies, recognized the opportunity and proceeded with the purchase of Columbian Rope.

Continuing the traditions that were established by Metcalf 175 years ago, Columbian Rope manufactures — from its four locations throughout North America — ropes, cords, webbings and stretch cords of all types of synthetic materials — from 1/16 to 6-in. in diameter. 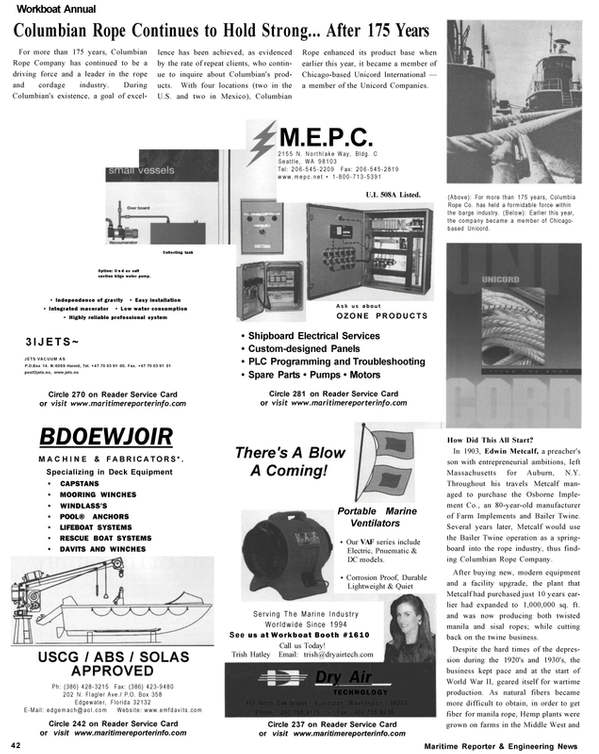