Although the horizontal foil was originally put there to increase the strength of the skegs, it also generates lift from the water flowing up the rake. The direction of this lift is not only up, but forwards as well, so it actually provides some thrust.

Gruzling says that the vertical foils interact with vortices formed as the water fills in from the sides, also reducing the drag .

There seems to be both scientific and anecdotal evidence that the Hydralift skegs work. Gerry Stensgaard, manager of the Ocean Engineering Center at B.C. Research, Inc., a towing tank in Vancouver, Canada, says that when they test barges, they find that normal skegs typically add 30 to 50 percent more resistance over the bare hull drag. From a number of tests, they have found that the Hydralift skegs add 10 percent or less resistance, and theoretically could reduce the overall resistance to below the bare hull resistance. He gives some specific examples: one barge design, in which regular skegs increase the resistance by 23 percent, Hydralifts increase it by only four percent. He says that these model test results would suggest a three quarter to one knot speed increase for the same horsepower. Gruzling states says the other way to look at this is the tests predict a 20 percent saving in horsepower for towing at the same speed. Another example Stensgaard gives is a barge where normal skegs would increase the resistance by 50 percent, the Hydralift resistance reduction translates into about a two knot increase for the same horsepower.

In the real world, Bob Shrewsbury, President of Western Towboat, says that they can get at least a half knot increase in speed, though they "typically reduce power and tow at the same speed".

Interestingly, it turns out that one class of barge that Western Towboat tows for ARM is the first example that Stensgaard gave, where he said the results predicted a three-quarter to one knot increase. John Armstrong, VP of Marine Operations at Seaspan International, says that they enhance the sea speed, increasing it by one quarter to half a knot. Gordon Taylor, Operations Manager for Dunlap Towing, also says that their "tow speed is a little better, typically half a knot." Others report that one can back off the throttle by 10 percent to make the same speed, which, using a standard propeller curve, compares closely with the tow tank results of a 20 percent horsepower savings. These independent reports seem to give a consistent comparison between real life and theoretical results, that is within engineering tolerance.

The story that Shrewsbury feels really illustrates the performance of the Hydralift skegs involves two Western Towboat tugs: the Western Titan and the Gulf Titan which happened to be side by side in Principe Channel, a straight off the B.C. coast, each with a barge under tow. Both have twin 2,260 hp diesel engines on Ulstein Z-Drives turning 100 x 120-in. propellers in Nautican High Efficiency Nozzles, although the Gulf Titan is 12-ft. longer. The Western Titan had a 322 x 90 x 18 ft., 5,000-dwt barge with ordinary skegs on the line, while the Gulf Titan was pulling a 422 x 100 x 25 ft. 10,000-dwt barge that had the Hydralift skegs.

Using readings from the CAT Engine Vision system to measure fuel flow, he says, "they were making the same speed, burning the same fuel", which he says shows how much more efficient the Hydralift skegs made the heavier barge.

The biggest complaint, though, about Hydralifts seems to be that they act like a huge garden rake and can pick up debris, which slows the barge down. The skegs are required to be cleared using methods such as moving the debris out with a tug's propeller wash, spinning the barge around away from the debris, or backing the barge up.

John Fowlis, Hull Superintendent at Seaspan International Ltd., provides some of the other limitations of the Hydralift skeg. At slow speed, less than about three knots, he reports "they tend to skitter all over the place" and that they can wander in shallow waters . He said that they "tend to require a tail boat, especially in current or rivers." Unlike Seaspan, Shrewsbury says that they do not require a tail boat to bring the barge in, but this may be because they make up on the hip (side tow) when bringing the barges in, whereas the Canadians shorten up the towline. Gruzling explains that the loss of control in shallow waters comes from a bottom effect, when the stern rake is too steep relative to the depth of water and the water separates from the rake, so the skegs do not have enough flow over them to create the lift required to stabilize the barge. This is similar to the explanation he has for why not all barge designs are suitable for Hydralift skegs. He states that if the aft rake is too steep, the same water separation problems will occur in deep water.

The lack of directional stability at slow speeds was a problem with the first generation of skegs resulting from how they were configured to come back on course after encountering a disturbance. Gruzling states that originally, they were given the same directional damping as ordinary skegs.

The second generation of Hydralifts have much more damping and the complaints he sometimes hears now are that the skegs are too effective and the barges can be difficult to turn.

Fowlis also states that they also do not stand up to grounding very well, especially in mud where they "act like mushroom anchors." Fowlis also points out that if damage results from this, the debris collecting tendency, or from the tugs hitting them during tie-ups, it "is more of a process to repair". Because they have a curved foil section, rather than the flat surfaces of ordinary skegs, they take more work to repair.

In the past six years, Gunderson Marine in Portland, Oregon has built at least 10 barges with Hydralift skegs.

According to Chuck Garman, Marine marketing and sales manager at Gunderson, the Hydralift skegs are three to four times the cost of regular skegs. But he stresses that they don't increase the overall cost of the barge very much at all, typically an extra one-half to one percent of the total cost of the barge.

Based on their current use, and the limitations found so far, Hydralift skegs seem best suited for long distance barge towing. For something as mundane as barges, the energy savings predicted in scale experiments are substantial and seem to have corresponding results in the real world. For companies doing long distance towing where a deadline or speed is of importance, or those companies where the fuel savings would more than offset any costs that might result from the skeg's limitations, Hydralift skegs are a concept that warrants further investigation. 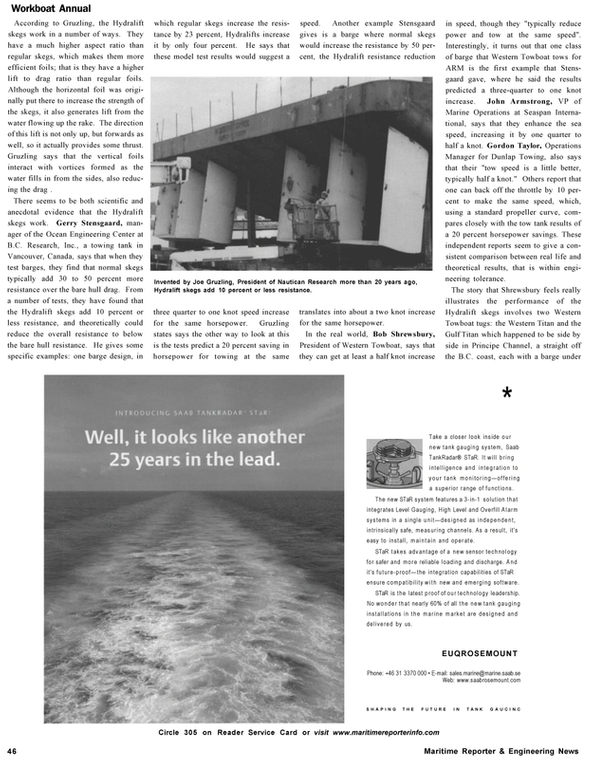