Waterman Steamship Corporation, 120 Wall Street, New York, N.Y., has applied for both construction- differential subsidy (CDS) and Title XI guarantees to aid in financing the construction of either a roll-on/roll-off (ro/ro) vessel or a lighter-aboard-ship (LASH) vessel to replace two 1945-built freighters operating on its Trade Route 18 service.

The proposed ro/ro vessel would be 684 feet long, with a deadweight capacity of 19,534 tons and a speed of 23 knots. Estimated actual cost, for which Waterman is seeking 50 percent CDS, is $87.8 million. The vessel would contain four decks and four cargo holds: one for breakbulk cargo and the other three for roll-on/ off cargo. Containers would be stowed on the "A" deck. Although the application does not specify the container/trailer capacity, it does indicate that 900 containers, 500 chassis, and 300 trailers would be required to support the ship. It would be used to carry containers, wheeled cargo, and heavy-lift cargo from U.S.

Atlantic and Gulf ports to Southwest Asia from Suez to Burma, and Africa in the Red Sea and the Gulf of Aden.

The proposed LASH vessel would be 893 feet long, with a deadweight capacity of 38,500 tons and a speed of 22 knots. Estimated actual cost is $80.9 million; Waterman seeks 50 percent CDS. It would be used for the same trade as the ro/ro vessel.

The LASH vessel would have a capacity of 89 barges—36 on deck and 53 in seven holds. Its lighter crane capacity would be 550 short tons.

Waterman is required by the replacement obligation of its operating- differential subsidy (ODS) contract for T.R. 18 to contract for the construction of one LASH or one ro/ro vessel by November 26, 1977. Presently, Waterman operates three LASH vessels, two Mariners, and two reconverted C4 freighters on T.R. 18. It also operates vessels, without ODS, in services between Gulf and Atlantic ports and the Far East, Scandinavia, the Baltic, and the USSR. ODS applications have been filed for these services. 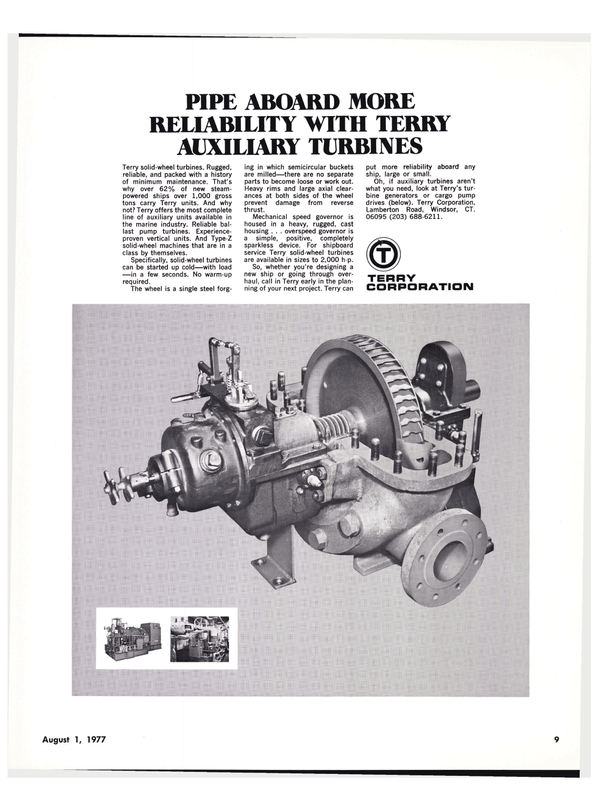 Read Waterman Plans To Build Either An $80-Million Or An $87-Million Vessel in Pdf, Flash or Html5 edition of August 1977 Maritime Reporter