Popular MC Engine Series Sales Rise Orders for MAN B&W Diesel's MC two-stroke series engines are on the rise, according to the company.

By mid-September of this year, the company reported that 1,246 MC low-speed engines with an aggregate output of 16,056,900 bhp (nominal) were on order or in service, with installations aboard vessels ranging in size from large fishing vessels to state-of-the-art containerships and VLCCs.

The new models, designated K80MC-C and K90MC-C, are special versions of successful 800-mm and 900-mm bore engines. The 12- cylinder K90MC-C engine raises the upper limit of the MC program to 67,080 bhp. The new versions offer shipowners and shipbuilders the same benefits as other MC engines— high reliability and low operating and production costs.

Three 12-cylinder K90MC engines, each developing 64,320 bhp, have been ordered for a trio of large containerships which will be the most powerful single diesel-propelled vessels ever commissioned.

Ten-cylinder, 900-mm bore engines, each with a maximum rating of 53,600 bhp at 90 rpm, were ordered for a series of nine containerships being built for Danish owner A.P.

The popularity of the MC series reflects the scale of its power range, one of the widest on the market.

The broad appeal of the uniflow scavenged MC program is emphasized by a number of significant propulsion plant installations in recent months. Among them was the 3,900- TEU Marchen Maersk, the first of A.P. Moller's 10K90MC-powered advanced containerships to enter service.

The other end of the power spectrum saw the seagoing debut of the S26MC design, the latest and smallest addition to the MC series, in the 126-TEU feeder containership Rokku Maru. The six-cylinder S26MC develops 2,185 kw (2,970 bhp) at 250 rpm.

Orders for the S26MC for newbuildings in China and South Korea, as well as a great deal of interest from European customers, suggest that the 260-mm bore design will increase the low-speed engine's penetration of the small-to-mediumsized ship sectors—a market already sucessfully targeted by the 350-mm bore MC models.

Already, R&D and component simplification has reduced the number of production hours for an MC engine by around 20 percent as compared with earlier models, and assembly times have been cut even more significantly. 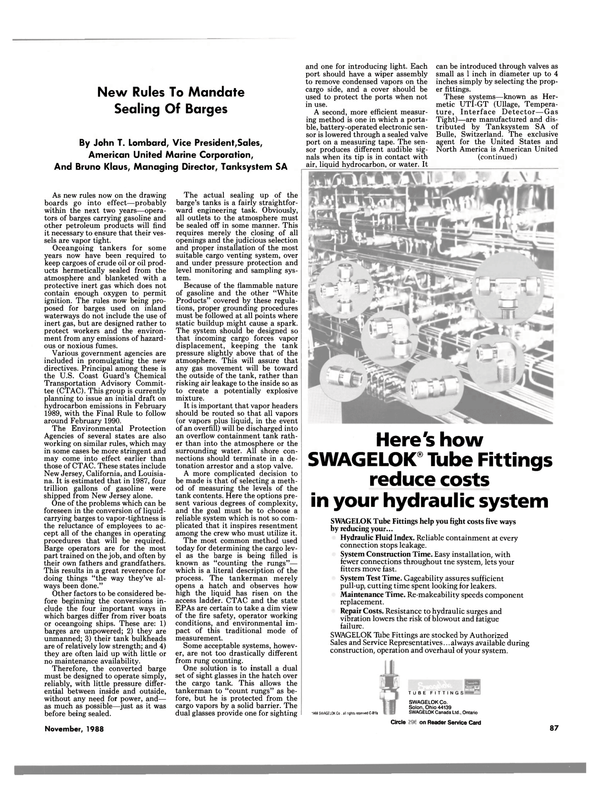