As new rules now on the drawing boards go into effect—probably within the next two years—operators of barges carrying gasoline and other petroleum products will find it necessary to ensure that their vessels are vapor tight.

Oceangoing tankers for some years now have been required to keep cargoes of crude oil or oil products hermetically sealed from the atmosphere and blanketed with a protective inert gas which does not contain enough oxygen to permit ignition. The rules now being proposed for barges used on inland waterways do not include the use of inert gas, but are designed rather to protect workers and the environment from any emissions of hazardous or noxious fumes.

Various government agencies are included in promulgating the new directives. Principal among these is the U.S. Coast Guard's Chemical Transportation Advisory Committee (CTAC). This group is currently planning to issue an initial draft on hydrocarbon emissions in February 1989, with the Final Rule to follow around February 1990.

The Environmental Protection Agencies of several states are also working on similar rules, which may in some cases be more stringent and may come into effect earlier than those of CTAC. These states include New Jersey, California, and Louisiana.

It is estimated that in 1987, four trillion gallons of gasoline were shipped from New Jersey alone.

One of the problems which can be foreseen in the conversion of liquidcarrying barges to vapor-tightness is the reluctance of employees to accept all of the changes in operating procedures that will be required.

Barge operators are for the most part trained on the job, and often by their own fathers and grandfathers.

This results in a great reverence for doing things "the way they've always been done." Other factors to be considered before beginning the conversions include the four important ways in which barges differ from river boats or oceangoing ships. These are: 1) barges are unpowered; 2) they are unmanned; 3) their tank bulkheads are of relatively low strength; and 4) they are often laid up with little or no maintenance availability.

Therefore, the converted barge must be designed to operate simply, reliably, with little pressure differential between inside and outside, without any need for power, and— as much as possible—just as it was before being sealed.

The actual sealing up of the barge's tanks is a fairly straightforward engineering task. Obviously, all outlets to the atmosphere must be sealed off in some manner. This requires merely the closing of all openings and the judicious selection and proper installation of the most suitable cargo venting system, over and under pressure protection and level monitoring and sampling system.

Because of the flammable nature of gasoline and the other "White Products" covered by these regulations, proper grounding procedures must be followed at all points where static buildup might cause a spark.

The system should be designed so that incoming cargo forces vapor displacement, keeping the tank pressure slightly above that of the atmosphere. This will assure that any gas movement will be toward the outside of the tank, rather than risking air leakage to the inside so as to create a potentially explosive mixture.

It is important that vapor headers should be routed so that all vapors (or vapors plus liquid, in the event of an overfill) will be discharged into an overflow containment tank rather than into the atmosphere or the surrounding water. All shore connections should terminate in a detonation arrestor and a stop valve.

A more complicated decision to be made is that of selecting a method of measuring the levels of the tank contents. Here the options present various degrees of complexity, and the goal must be to choose a reliable system which is not so complicated that it inspires resentment among the crew who must utilize it.

The most common method used today for determining the cargo level as the barge is being filled is known as "counting the rungs"— which is a literal description of the process. The tankerman merely opens a hatch and observes how high the liquid has risen on the access ladder. CTAC and the state EPAs are certain to take a dim view of the fire safety, operator working conditions, and environmental impact of this traditional mode of measurement.

Some acceptable systems, however, are not too drastically different from rung counting.

One solution is to install a dual set of sight glasses in the hatch over the cargo tank. This allows the tankerman to "count rungs" as before, but he is protected from the cargo vapors by a solid barrier. The dual glasses provide one for sighting and one for introducing light. Each port should have a wiper assembly to remove condensed vapors on the cargo side, and a cover should be used to protect the ports when not in use.

A second, more efficient measuring method is one in which a portable, battery-operated electronic sensor is lowered through a sealed valve port on a measuring tape. The sensor produces different audible signals when its tip is in contact with air, liquid hydrocarbon, or water. It can be introduced through valves as small as 1 inch in diameter up to 4 inches simply by selecting the proper fittings.

These systems—known as Hermetic UTI-GT (Ullage, Temperature, Interface Detector—Gas Tight)—are manufactured and distributed by Tanksystem SA of Bulle, Switzerland. The exclusive agent for the United States and North America is American United Marine Corporation (AUMC) of Saugus (Boston), Mass. With a little practice, these tapes are almost as easy to use as a sounding line for measuring water depths. The tapes are calibrated in both inches and centimeters. Temperature is displayed either in degrees, Fahrenheit or Celsius.

Barges routinely load cargoes for multiple destinations with specific volumes for each customer. To measure these volumes, "step gauging" is used. The ullage sensor bob is positioned in the tank at a level determined from tables on board, and cargo is unloaded until the liquid surface falls to the level of the bob.

The gauging tape is installed on top of a ball valve by means of a quick connector. The gastightness is guaranteed up to 3 psi tank pressure, thus protecting the operator and the environment from any hazardous substances such as benzenes and toluenes.

Sampling containers are also available which can be used through the same 2-inch valve used with the measuring tapes and probes just described to provide removal under vapor-tight conditions.

A more sophisticated system is the high-level alarm and overflow control system distributed by Vimex A/S of Tonsberg, Norway, which is also exclusively distributed by AUMC in North America. This equipment utilizes acid resistant stainless steel floats in contact with the liquid cargo. The floats carry magnets which activate reed switches when preset levels are reached. Audible and visual signals are presented by an alarm panel to the operators, either on board or at remote locations such as the terminal office.

In addition to warning with alarms, the panel can also be programmed to activate valves or pumps which will counteract the overflow situation.This is the same type of equipment which has been used on oceangoing chemical carriers and tankers carrying LNG and LPG since 1966.

For further information and descriptive literature on equipment for vapor-tight ullage measurement and high-level alarms. 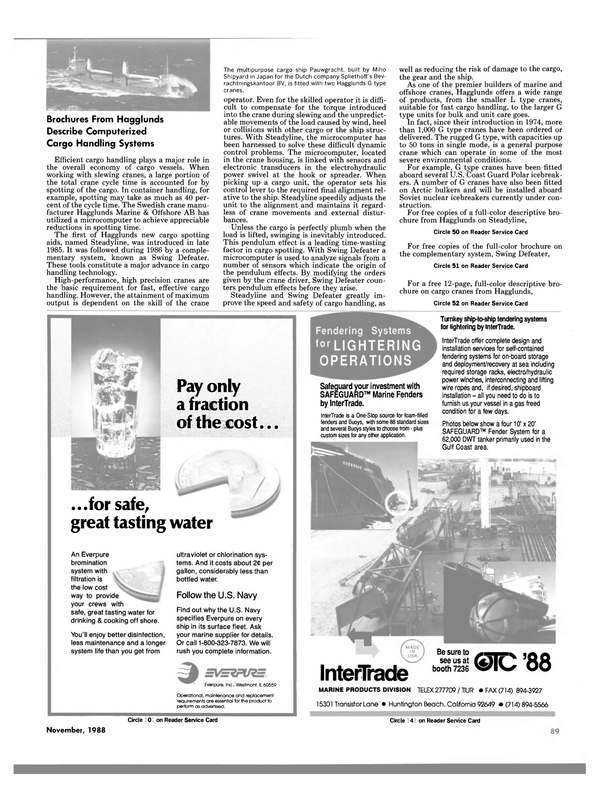