This special review highlights some of the most notable and important workboats delivered by U.S. boatyards during the past year. Each selection in this awardwinning group features its own distinctive stamp of performance excellence and fine craftmanship AARON MCCALL Gulf Craft Gulf Craft, Inc., Patterson, La., delivered the world's second largest crewboat, the Aaron McCall during 1988.

The 155-foot, 84-passenger crewboat, the sister boat of the Blair McCall, which was delivered last year, was built for McCall Enterprises of Cameron, La.

The main engines were supplied by Cummins Mid-South and the generator package was supplied by Kennedy Engine.

The Aaron McCall's pilothouse is fitted with a complete set of electronics.

GUIA/LIDER Houma Fabricators In the first quarter of this year, Houma Fabricators delivered the tractor tugs Guia and Lider to the Panama Canal Commission. The sister vessels both have Voith- Schneider cycloidal propulsion systems which feature 360-degree thrust for outstanding maneuverability.

The tugs are used to assist and tow ships through the narrow Panama Canal and locks.

The 95-foot tractor tugs are powered by two 1,500-hp EMD diesel engines that generate a bollard pull of 85,000 pounds. The tractor tug concept is enhanced by 58,000 pounds of side pull which allow the Guia and Lider to hip up to a ship and maneuver it into tight places that prove to be troublesome to conventional tugs.

The delivery of the Guia and Lider brings the number of vessels recently delivered by Houma Fabricators to the Panama Canal Commission to five. The 3,000-hp twinscrew harbor tug Esperanza was delivered in 1985, while the 3,000-hp Chagres was outfitted as a dredge tender and delivered in June 1987.

In addition, a 130-foot salvagediving barge complete with machine shop, salvage crane and decompression chamber was delivered in September 1988.

Houma Fabricators was recently awarded a contract by the Panama Canal Commission to build another tractor tug identical to the Guia and Lider. The contract contains an option for a sister vessel. The Commis- sion also awarded the Houma yard a contract to build a tender tug, identical to the 1987-built Chagres. Both will be 3,000 hp and are scheduled for delivery in the fall of 1989.

Halter removed the vessel's drilling mud tanks below decks and sandblasted, painted and insulated that area, turning those spaces into a 26,000-cubic-foot refrigerated hold. Miscellaneous offshore equipment and a wooden aft deck were removed and replaced with a 1,400- square-foot processing room.

The boat's propulsion is provided by two EMD 12-567-BC diesels with Falk 2.98:1 reverse/reduction gears.

Halter Marine Inc. is one of six shipyards in the Trinity Marine Group, which is owned by Trinity Industries, Inc.

The waterjet-powered Phoenix III, designed for low-speed operation in shallow water, is 34-feet long with a beam of 13 feet. With a large pumping capacity and 100 gallons of AFFF foam, she is readily equipped for firefighting.

Driven by twin Crusader 350/454 marine engines coupled to Nomera 12 jet pumps, she can reach speeds in excess of 25 knots. The jets have diverter and check valves engineered by North American Marine Jet, Inc., to divert water flow into the firemain system.

Two Ansul M-l monitors are mounted on the bow and are controlled by joysticks near the operator's console. These monitors will deliver 240 gpm of foam and may also be used for water.

One mission of the boat will be to speed rafts to passengers who evacuate downed airplanes into the water. The boat carries 20 MRP-10S Switlik rescue platform type inflatable rafts on forward and aft decks.

She is even equipped with some medical facilities.

The boat is based on SeaArk's Protector hull design, which features a shallow draft of about 1 foot 10 inches, rugged construction and other excellent performance characteristics.

SeaArk has built Protector Class boats for the U.S. Coast Guard Base at Governors Island, N.Y., and they are presently building another boat for a Coast Guard base in Portsmouth, Va.

Powered by two Yamaha V-6 outboard motors rated at 225 horsepower each, the boat is able to reach speeds of up to 42 knots.

Other features include a raised sheer forward for increased freeboard, bow deck safety railing, recessed after deck and shallow gunwales for small boat inspection, extruded rubber bumper installed at the sheer and on the hull sides, and a heavy-duty tow post for use in assisting disabled vessels.

The Sajo Victoria is a single screw steel hull tuna purse seiner, with a steel deckhouse and an aluminum pilothouse. She has 15 refrigerated fishwells, an anti-roll tank and a free-standing king post to support the main boom, cargo booms and crow's nest.

The builder describes the Sally as having "the power of a bulldozer and the maneuverability of a sports car." She can handle vessels with deadweights ranging from 50,000 to 125,000 tons.

Like her sister boat Tina, she does not employ conventional rudder with fixed propellers. Rather, the Sally is fitted with a pair of independent, high-thrust, fully rotable propulsion/steering units that can be operated individually or together in any direction to put maximum power exactly where it is needed.

The Sally's pilothouse, high above the deck, offers excellent visibility.

The helm station features dual unilever-type controls and a functional console with all necessary instrumentation. The tug is fitted with 12-inch bow and 16-inch aft towing bitts, two 40-ton hand-operated barge winches, and a hydraulic vertical capstan which is incorporated into the aft towing bitt. She is capable of a bollard pull of some 80,000 pounds. Schulyer 6-inch and 11-inch tendering borders the deck edge, and 9-inch-thick tendering provides gripping action during ship-handling operations.

For ease of service and maintenance, the Ulstein angle drive units, including propellers and Kort nozzles, can be lifted through deck hatches without drydocking the vessel.

The redesigned Seattle Enterprise is one of only four at-sea U.S.

Originally a 220-foot steel-hull boat used for offshore oil and gas research, the Seattle Enterprise will be employed primarily for fishing and surimi production in the waters of the Pacific Northwest.

With the assistance of a team of maritime professionals, including Arctic Alaska chairman of the board Francis Miller, Bender's in-house engineering and design group severed the ship at its midsection and inserted a 50-foot midbody to add a main fish net deck, processing deck, freezer compartments and freshwater processing area. The converted Seattle Enterprise now measures 270 feet from bow to stern with a 44-foot beam.

The Seattle Enterprise is equipped with a 47,000-cubic-foot freezer cargo hold and has the capacity to make 104,000 gallons of fresh water per day. The vessel is powered by two EMD main diesel engines rated at 1,950 hp each at 900 rpm. For maneuverability, she is fitted with a Caterpillar-powered 425-hp Bird- Johnson bowthruster. Four KATO generators provide power for the ship's processing plant and crew facilities.

Arctic Alaska owns and operates one of the largest American-owned catching and at-sea processing fleets in the North Pacific. The Seattle Enterprise, manned by a crew of 50, became the largest catcher/processor in the company's fleet when she was placed into service this year.

SUPERAMERICA Q u a l i t y Shipyards In the spring of this year, Houma, Louisiana-based Quality Shipyards delivered the SuperAmerica, the third in a series of three new 4,200- hp pushboats built for Ashland Oil, Lexington, Ky.

The SuperAmerica, with an overall length of 150 feet and breadth of 45 feet, is powered by a pair of Caterpillar 3606 diesel engines fitted to Falk 24MR40 reduction gears with a ratio of 4.48:1 turning 105-inch Columbian Bronze five-bladed propellers.

For additional low-speed power, the SuperAmerica's propellers are fitted with Kort nozzles.

Electrical power is provided by two 155-kw generators each powered by a Caterpillar 3306TA diesel engine.

Some of the navigation and communications equipment featured aboard the pushboat includes two Standard Horizon VHF radios, a Motorola SSB radio, two Sperry Marine radars and an Elac depth sounder.

The SuperAmerica along with her sister vessels, the Paul B. Blazer and the Valvoline, cost $10.5 million.

The three pushboats replaced towboats in the Ashland fleet that were all more than 40 years old.

The 224-foot U.S. Enterprise is a floating factory vessel, which is able to catch up to 250 tons of pollock per day and process 50 tons of surimi.

The boat, which was built at Halter's Moss Point, Miss., yard, was originally intended for use in the offshore oil and gas market.

However, while the vessel was still under construction, Francis Miller, chairman of Arctic Alaska, saw the boat's potential use as a catcher/ processor. Mr. Miller and the Halter design team redesigned the U.S.

Enterprise for her present use.

Powered by two GM-EMD 16- 645C diesel engines developing a total of 3,900 hp through Reintjes WAV 2660 reverse/reduction gears, she has a beam of 42 feet and a depth of 16 feet. Her diesels drive two Coolidge, five-bladed, 118-inchdiameter by 130-inch pitch, stainless steel propellers in Kort nozzles.

The catcher/processor is fitted with an Atlas Danmark 110,000-gallon- per-day, three-stage evaporation- type watermaker, which provides more than double the watermaking capacity needed for processing surimi.

The U.S. Enterprise is fitted with a Westfalia model OSA 7 centrifugal purifier from Centrico to clean the vessel's diesel fuel. 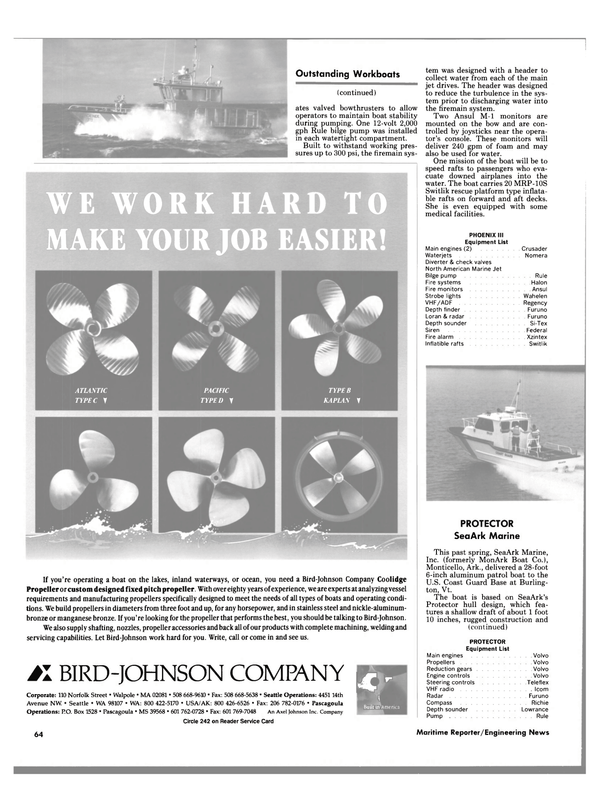