One wonders if, when Benjamin Randall Vickers went into business in 1828 as an agent selling oils and soaps, he had the prescience to see the ever growing need for specialized lubricants as the Industrial Revolution gathered pace. He didn't have an easy ride. But he did have the guts, acumen and integrity to build on his successes and overcome his setbacks. The business he handed down to his sons, and sons of sons, is today a highly focused organization with a respected range of marine lubricants widely used in sterntubes and thrusters. and an equally impressive range of specialized lubricants for the textile industry.

As early as 1887, before sail had finally given way to steam, Vickers realized that mineral oils significantly outperformed vegetable oils for the lubrication of engines. Following studies of hot bearings on the main engines of ships in the Red Sea and Suez Canal, the company introduced its 'Non-Corrosive Engine Oil', forerunner of the 'Neox' brand that lives on today.

The founder's son. Benjamin Threlfall Vickers, was aboard the Goole & Hull Towing Company's Tug No 10 when the company's policy of 'walking the shop floor' next paid dividends.

The tug used 'Neox' but. before Benjamin's eyes, the skipper did something very odd: he poured a quantity of the oil into the 'tail shaft' or. as we know it today, the sterntube. As every shipowner and marine engineer knows to this day. it is one thing to put lubricant into a sterntube and quite another to keep it there. The first move Vickers made, therefore, was to design the Stern Tube Gland, forerunner of today's sterntube seals. In 1901 the T.S.S. Ibex' was the first vessel commissioned with the gland installed and the birthright of today's 'Hydrox' specialized lubricants was in the making.

Although Vickers were principally involved in developing and blending specialized lubricants, the Stern Tube Gland continued to form part of their business for over half a century. Some vessels were poorly constructed and were running through bearings in the propulsion system faster than they could be replaced.

A modified version of the Vickers Stern Tube Gland was designed and installed and, combined with the appropriate Vickers lubricant, solved the problem and enabled the vessels to remain in service between scheduled maintenance intervals.

In that fundamental sense, nothing has changed today, though the lubricants are far more refined and Vickers have left the business of making sterntube seals.

Another significant step was devising a lubricant that would be compatible with rubber materials used in modern 'lip' seals, while continuing to be effective if water ingress occurred in the sterntube, and the formulation of Hydrox 550 was a defining moment.

Hydrox 550 forms a stable emulsion with water, even at a rate of ingress up to 209c. Vessels can continue to operate if sterntube leakage occurs, without damage to the shaft, seals and bearings that may well result from the use of a conventional engine oil.

A further refinement. Hydrox 21, significantly reduces leakage, reportedly by at least 70'A. even in the event of quite serious damage to the sterntube seals, again permitting vessels to remain in revenue operation until the next scheduled maintenance stop. Many ships carry a stock of Hydrox 21 on board in case such leakage occurs.

Most recently, Hydrox Bio 68 provides an environmentally friendly, biodegradable sterntube lubricant that is innocuous to marine life but offers the same performance advantages as Hydrox 550 in case of water ingress.

If. back in 1828, Benjamin Randall Vickers felt that he had identified a significant growth market, he could hardly have imagined that. 175 years later, the company would have developed such a significant worldwide market. Still less could he have imagined that the business would remain under the safe, unbroken stewardship of his direct descendants, but that is the case. 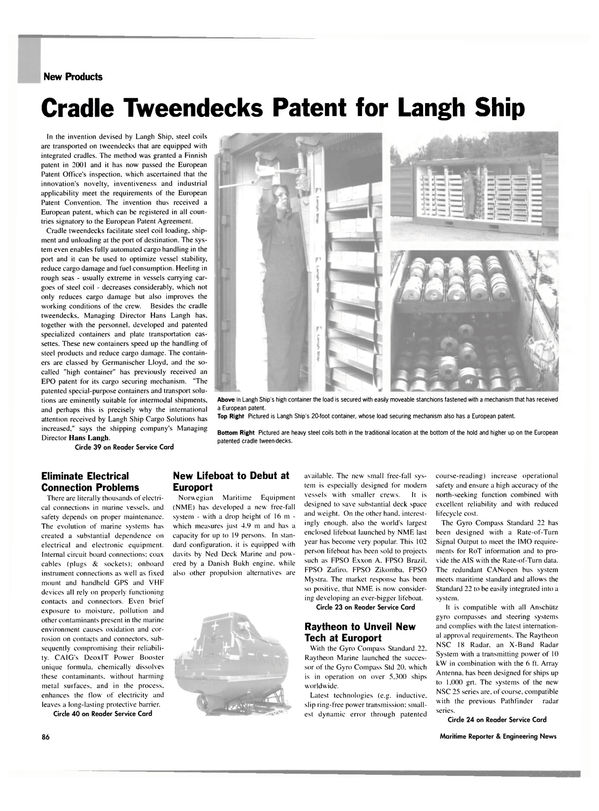