Taking a page from OPA 90, the European Union has officially adopted its unilateral plan for accelerated phaseout of single-hull tankers. The regulation was published in the October I edition of the Official Journal of the European Union and came into effect on October 21, 2003. It provides for, among other things, the immediate ban on transport of heavy grades of oil in single-hull oil tankers of 5,000 dwt or above to or from EU ports and the accelerated phase-out of single-hull oil tankers on a schedule tied to the ship's MARPOL category.

The move drew immediate negative reaction from the International Maritime Organization (IMO). an organization which generally frowns upon such national or regional action. In a statement released October 23, Secretary- General of IMO, William A. O'Neil.

expressed serious concern about the European Union Regulation on singlehull oil tankers. O'Neil was particularly disturbed at their unilateral character and the negative repercussions the measures would have on the shipping industry, which, due to its international nature, makes it imperative that safety, security and environmental standards must be established on the basis that they would be applied globally.

The statement indicated that he was particularly disappointed for two reasons: • the decision not to choose IMO as the international forum for consideration and adoption of such measures as those brought into force by the European Union flew in the face of IMO's successful response to challenges which followed the 1999 incident involving the tanker Erika - a response which had been received with satisfaction by all parties concerned, including the European Union members; and • because the Organization had already agreed to adopt a "fast-track" approach to accommodate European Union environmental concerns arising from the Prestige accident, particularly to consider the accelerated phasing-out of single-hull tankers. To this effect, the Membership of IMO has agreed to convene a special meeting of the Marine Environment Protection Committee (MEPC) in December to consider amendments to the MARPOL Convention, as proposed by the European Union members, with the aim of securing agreement to new global standards. 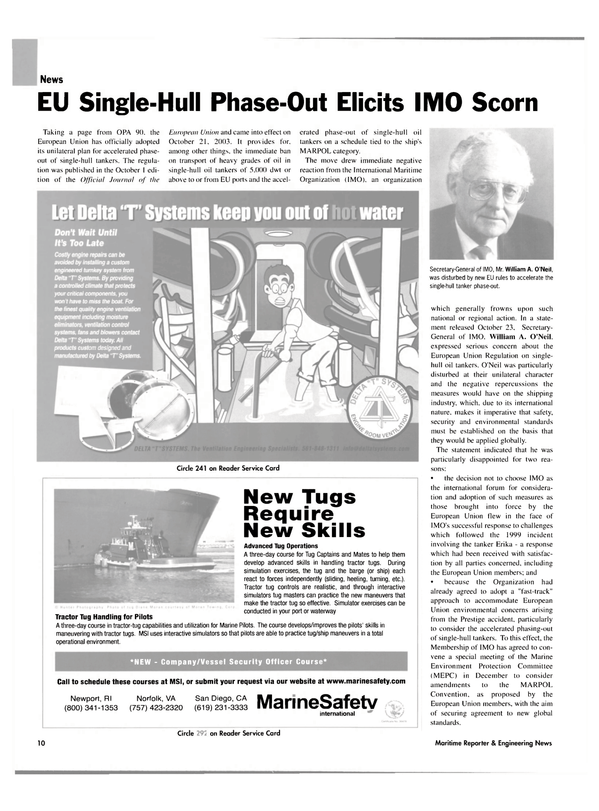