Xybernaut Gets Patent for Detecting Corrosion on Maritime Vessels

Xybernaut Corporation has been granted a patent by the U.S. Patent and Trademark Office related to a system that detects corrosion on maritime vessels.

Called "System for assessing metal deterioration on maritime vessels," the patent essentially describes a system or apparatus for on-site testing and inspecting of metal structures and their deterioration using non-destructive testing (NDT) devices and computing technologies.

Under this patent, the inspector wears both the NDT device and a mobile/wearable computer. This configuration affords immediate access to inspection and test results. In the marine industry, ships of all kinds are inspected and gauged for hull thickness and deterioration.

This activity typically takes place at specified intervals and at predetermined locations. In particular, chemical and oil tankers and bulk carriers are subject to metal deterioration, because of corrosion, at a faster rate than other types of ships. Significant metal loss places the vessel at risk of severe casualty and/or loss. "Current inspection/gauging practices typically require the inspector to obtain data while on the vessel, however, the information must then be transferred from a paper checklist or a hand-held device to a more powerful computer for comparison with a stored database of past data," said Richard Bizar, vice president for Xybernaut Corporation. "This activity takes time and the vessel, in most cases, is underway - engaged in numerous operations when actual hull condition is determined. Decisions made at this time can mean the difference between life and death and considerable costs, as in the case of vessels or cargo lost in heavy weather because of deteriorated hull strength." Richard Bizar, inventor for this patent, is a retired U.S. Coast Guard Officer who specialized in Marine Safety and Environmental Protection during his USCG career of over 20 years. During his USCG tenure. Richard had many assignments in shipyards, including resident USCG Inspector at Todd Seattle and St Louis Ship. At Xybernaut. where he has been for the past four years, Bizar currently directs special projects related to various technologies and market sectors.

Specifically related to this patent, he has analyzed how mobile/wearable technologies can be utilized for on-site testing and inspection of ships and metal structures to determine deterioration as well as to identify defects. 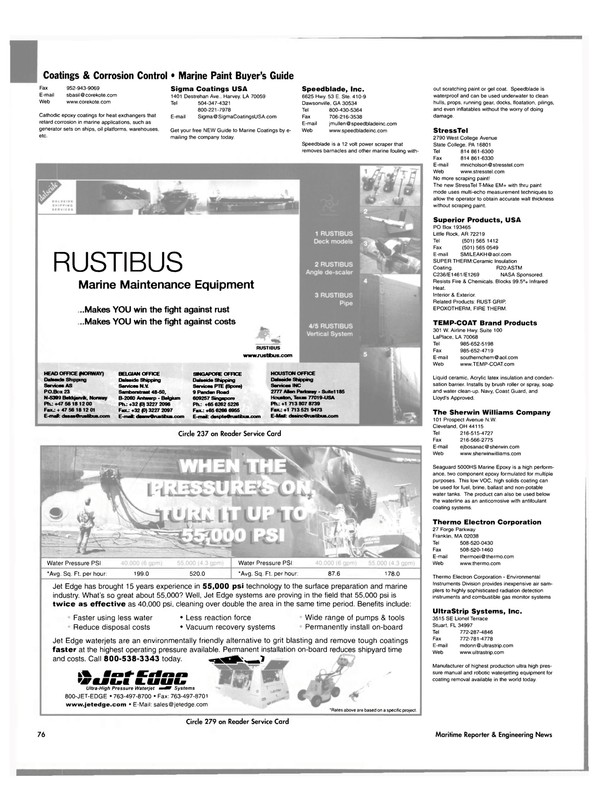 Read Xybernaut Gets Patent for Detecting Corrosion on Maritime Vessels in Pdf, Flash or Html5 edition of November 2003 Maritime Reporter