Paperwork is, and always has been a necessary and essential aspect of ship operation. Indeed, the Barcelona Maritime Code of 1258 required ships carry clerks specifically for this purpose releasing the master to concentrate on his primary duty, safely navigating the vessel.

Unfortunately, such is the way of things few ships now carry clerks.

Indeed, notwithstanding a mushrooming in documentation shipping is required to carry and use in recent years, notably at the behest of the International Maritime Organization (IMO). the number of crew available to manage the workload continues to reduce, the burden increasingly falling on the bridge watchkeepers.

To what extent this has an impact on safety is moot. Certainly it would take too long to detail the individual forms navigators are supposed to complete prior to arrival in port, or how many times identical information must be reported to authorities using the bridge VHF as the ship passes from one state's waters to another.

And what is the added value of all this red tape'.' Who knows? Who cares!

Providing officialdom is appeased; a tick in the box on yet another form, would anyone really notice if the script of a daytime TV soap opera bore more resemblance to reality than some of the information data normally supplied by ships?

There is a document, however, that has traditionally been treated with the utmost respect by all ships' navigators: the logbook, a contemporaneous record of events of significance that took place during a voyage.

Although the logbook performs a number of functions, arguably it primarily provides the principal reference source for the information necessary to arbitrate any dispute between stakeholders involved in the shipping adventure.

Amongst other things, the logbook protects the interests of the ship's navigator meaning, without any form of external pressure or interference, there should be no issue here in relation to its completeness, accuracy and integrity of any logbook, the master's own record traditionally considered to be the sole judge of fact in relation to an event.

Not that this was always so. The Barcelona Code's requirement for clerks on ships had nothing to do with any philanthropy towards the master or any other member of the crew employed by the owner. Those involved with the drafting of this regulation were clearly of the opinion, or had learned through hard experience that ships' masters were subject to the temptations of falsehood, fabrication and tampering, spinning or otherwise embellishing the logbook to ensure it enhanced one perspective to the exclusion of all others.

Now it appears history is repeating itself with confidence being lost in the efficacy and veracity of logbooks completed by ships' navigators. Presumably this is why IMO has recently determined the need to intervene; the latest amendments to SOLAS requiring each ship maintain a logbook, in English (SOLAS Chapter V, Regulation 28).

For a well-run shipping company, the IMO issuing instruction on how its navigators should complete a logbook is well into the realms of teaching granny to suck eggs.

Nonetheless, even for the blue-chip operator there is always scope to take advantage of new technology that improves record keeping, reduces navigators' workload and assists those whose first language may not be English to correctly complete a logbook in accordance with the IMO prescribed format. That is. replace the traditional, paper document with an Electronic Log Book or ELB.

One of the first companies to develop an ELB is Marine IT Company AS (MARITCO). Based in Horten, Norway. MARITCO is a wholly owned subsidiary of Kongsberg. As its name suggests, the company provides specialist IT solutions to shipping.

As a former seafarer (he was an Engineer with Bergesens) Bj0rkan fully appreciated the key to producing any successful IT-based system for use in navigation is ensuring it adequately addresses the needs of users while taking full account of the constraints that normally do not apply in an office environment.

Some of these constraints are obvious; ships are hardly stable platforms and there are no maintenance engineers in the middle of the Pacific, others less so; a ships' crew is invariably multi-cultural with mixed age and IT skill profiles. The ELB therefore needed to be robust and, as far as was practicable, aligned with existing and familiar practice, evolution without revolution.

After comprehensive consultation with seafarers.

owners and regulators, although the ELB could be configured to support any data entry format, MARITCO adopted a style based on the long-established structure of the Norwegian Maritime Directorate's paper logbook, i.e.. with free text entry as well as standard tables.

In developing the ELB display structure, MARITCO paid particular attention to the role of the logbook, electronic or otherwise in enhancing human factors in ship operations. For example, although many of the ELB data fields could readily be automated, notably ship's position, the user is prompted and required to make a manual entry. B j0rkan said a concern raised by all those consulted was ensuring navigators retained ownership' over the logbook. And while it was clearly a simple matter to use GPS or similar to update the logbook, ensuring the navigator acted and confirmed the veracity of all data entries provided, amongst other things, some assurance of his or her cognizance.

Indeed, this underlines one of the fundamental differences between a logbook and a voyage data recorder (VDR). That is, the ELB fulfils the principle that it is a record reflecting the navigator's interpretation of events, what he or she thought was happening, as opposed to (just) the largely deterministic readings from sensors recorded in a VDR. Furthermore, and often overlooked, a well-designed logbook provides an exceptionally powerful aide-memoir reducing the risk of the navigator, or any other crew member overlooking key. safety-related tasks. Thus, while all ELB displays would broadly have a common structure, Bjarne stressed how important it would be for owners to work with their supplier and conduct a detailed task analysis in line with the International Ship Management (ISM) Code, implementing bespoke enhancements and modifications to the logbook as need be relevant to the risks impacting on an individual ship, or to the individual.

Unlike paper, this is readily achievable with an ELB and, as outlined later, any modifications required can be made remotely from the ship at, depending on the communications system available, any time.

With this freedom to amend the ELB's design, Bjarne was questioned whether this technology could be regarded to be any improvement on traditional paper, i.e.. in addressing the paradigm of whether the record completed by the navigator could be believed not least by the authorities. As he explained, with any IT-based system numerous checks and balances can be applied to the information recorded. This would include, for example, the actual time a logbook entry was made, who by and where. However, with judicious use of drop down' menus in data fields to reduce the workload and provide quick access to information, and assisting those whose English is limited, on the basis of trials conducted Bj0rkan was confident navigators would learn to routinely use the ELB as part of their operations rather than, as now, tending to scribble notes on paper to complete the logbook at some later time particularly as the display is designed to accessed using Microsoft's Internet Explorer from any bridge workstation.

This does not preclude navigators making post-dated entries, including corrections; and they would be encouraged to do so if this added colour to the log.

Nonetheless, once the master has conducted his or her inspection of the logbook, made whatever comments are considered necessary and signed for the record, even the most experienced computer 'hacker' would have no success trying to tamper or destroy the data not least because it will no longer just be on the ship!

To ensure robustness in the ELB, the technology is designed to operate within MARlTCO's FleetMaster ship-shore communications system. FleetMaster provides seamless integration between the ship's online data systems and those onshore facilitating the uploading of data from ship-to-shore for remote diagnosis and fault finding, with configuration change; e.g., log data field amendments, patches and updates for the ELB going in the opposite direction.

However, this integration of the ELB with the owner's IT network can provide far greater benefits than were available with a paper logbook. The owner can exercise complete and controlled access to any part of the ship's logbook at any time. B j0rkan suggested, with the attention paid to the design in the communi- cations links, all data collated in a ship's ELB during a twenty-four hour period can typically be compressed into a 20 kilobyte data packet for transmission to shore using any suitable technology; INMARSAT'S latest generation of FLEET terminals being particularly well suited.

Nor need it stop there.

With all the ship's logbook data mirrored in near real time in the owners office, there is no technical reason precluding any port state or other official inspecting a ship's logbook at any time without actually having to visit the ship, with all that implies in improving the efficiency of the ship inspection service and reducing the burden and stress on navigators in port.

Furthermore, no longer would it be necessary for a coastal state authority to specifically and directly contact or otherwise require a ship use radio to relay voyage related information to shore. It could all be provided via the Internet.

The ELB is not a technological revolution. It simply pulls together various, mainly off-the-shelf tools and expertise to provide an effective enhancement, if not replacement for one of the key prerequisites of efficient and safe ship operation, completion of a diary.

Operational experience with the ELB to date has been positive and a number of flag state authorities have already formally indicated their willingness to accept the technology as fulfilling SOLAS log keeping requirements.

But perhaps the most exciting feature of the ELB is where it potentially takes the science of data recording to understand the risks impacting on shipping.

Although the ELB has been designed for manual completion, with a modicum of assistance and guidance from technology, with the exception of audio due to the bandwidth required, there is no reason why the data presently being gathered on a VDR could not be included in the background of the ELB. In other words, if the transmission of updates from a ship's servers to servers onshore was increased to, say, once an hour, or even once a minute; the costs are trivial with INMARSAT Fleet, not only would those onshore know in near real-time what the navigators are entering into the logbook, they would also know what was going into the VDR. Whether the IMO would be prepared to take advantage of these developments, taking the view that the recording and secure storing of data relevant to accident investigation onshore has distinct advantages over trying to find it floating somewhere in the ocean, presuming it leaves the ship in the first place, is a debate for another occasion.

About the Author Steve Harding served at sea as an Electro-Techncal Officer with Shell Tankers for seven years. Thereafter he spent time with the UK Radiocommunications Agency before being appointed as a specialist surveyor with the Maritime & Coastguard Agency in 1991 to deal with navigation and communications technology, including the implementation of the GMDSS. In 2000 he left the MCA to establish his own consultancy, SUVAN Marine. Steve was awarded a Masters Degree in Navigation Technology from the University of Nottingham and elected a full member of the Royal Institute of Navigation in 1998. He can be contacted on sieve @ Sgmarine. co. uk 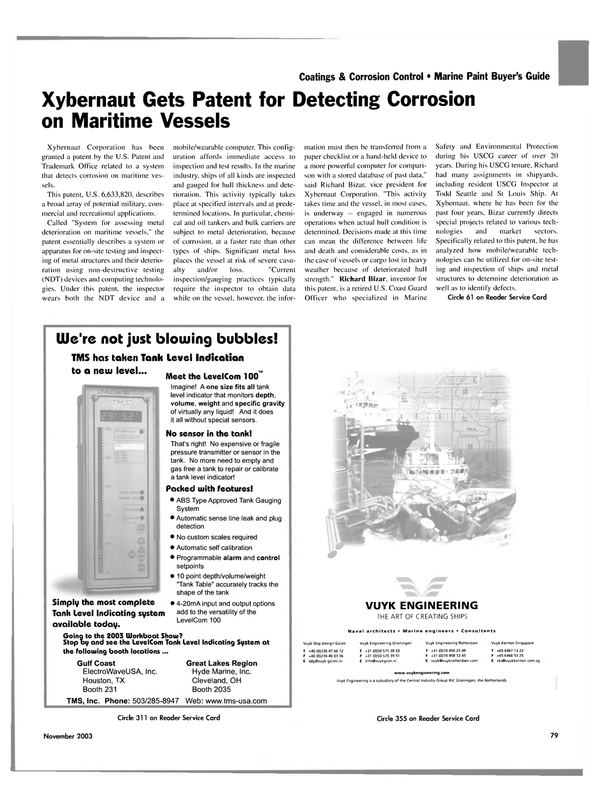