New York Corp's newest survey vessel — Moritz — recently joined the fleet. The 58-ft. catamaran was built in Seattle by Kvichak Marine and features an extensive array of survey equipment, including a Ross Dolphin Mini-Sweep System. With a beam of 18.5 ft., the vessel displaces 30 tons and can sustain speeds up to 30 knots. The Ross Mini-Sweep is a nine-channel system with individual transducers mounted on two 17-ft.

hydraulic booms and in the hull to provide a sweep wide of approximately 55 ft. The booms are stored in recessed areas in the hull, leaving the deck clear at all times. The booms are deployed by an independent hydraulic system using controls at the helm station.

Electronics are stowed in two desktop cabinets, one containing the depth sounding system and the other a data collection computer and DGPS sub-meter system.

Coastal Oceanographies Hypack Max and Hysweep software were installed for data processing. Upon arrival on the East Coast the vessel will be assigned to work out of the Caven Point, N.J. facility. New York District's Civil Works mission includes navigation and water resource activities in the watershed areas of Lake Champlain. the Hudson River. New York and New Jersey, western Vermont and small portions of Massachusetts and Connecticut. The vessel was named in honor of Kurt Moritz. who in 1977 retired from the Corps of Engineers after 27 years of service. 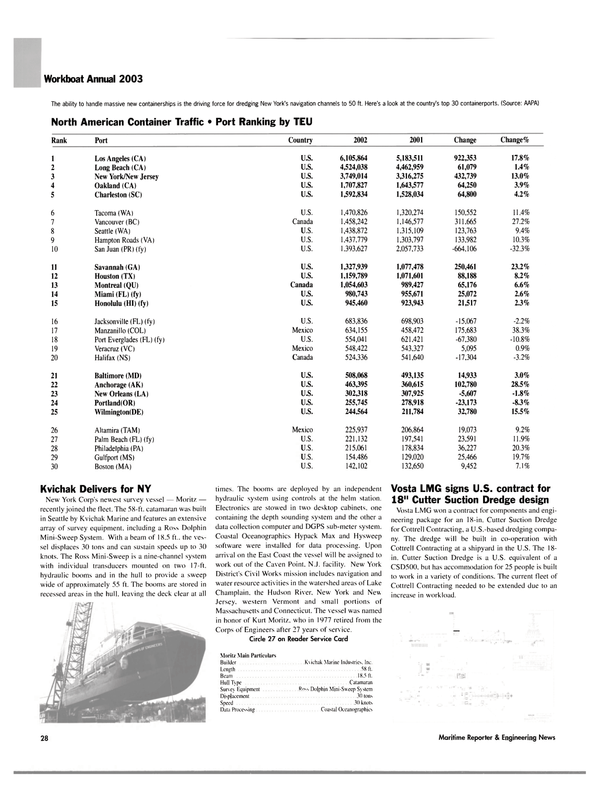