At Sea with U.S. Maritime Security

The U.S. Coast Guard issued its final regulations implementing the Maritime Transportation Security Act of 2002 (MTSA). These regulations replace the interim rules issued on July 1, 2003 and take into account comments received thereon. Few substantive changes, though, have been made. The majority of the changes are in the nature of clarifications.

The submission date for security plans was changed from December 29 to December 31, 2003. Vessel and facility security plans must be in full effect not later than July 1, 2004.

Various alternative security programs submitted by specialized industry groups were approved. Overall, the Coast Guard is to be congratulated for its development of a program for enhancing U.S. maritime security while maintaining consistency with the international regime. The rulemaking fails, though, to acknowledge the ongoing dispute with Congress over whether this approach is consistent with that mandated by the Maritime Transportation Security Act (MTSA). This leaves the owners and operators of foreign-flag SOLAS vessels stuck in the middle, with Congress having told them to submit security plans to the Coast Guard.

while the Coast Guard says such submittals are unnecessary.

The problem has been building for almost two years - from the time bills were introduced in the House of Representatives and the Senate to enhance the maritime security of the United States following the horrific terrorist attacks of September 11. 2001.

These bills contained provisions that were unilateral, that would require foreign ship owners and operators to do things that were not going to be duplicated internationally, such as making the U.S. government the arbiter of how secure a ship coming to U.S. waters had to be and setting security standards for foreign ports. A few voices counseled against this unilateral approach.

Surprisingly, the Coast Guard was silent. Admittedly, the agency had its hands full ramping up maritime security in all U.S. ports and orchestrating development of international maritime security standards, but its silence was perceived by some in Congress as providing the green light needed to move ahead swiftly and unilaterally.

To the casual observer, the ISPS Code and the vessel security planning requirements of the MTSA appeared to be virtual mirror images, with both requiring development and implementation of ship (or vessel) security plans that established physical security, passenger and cargo security, and crew security, among other things.

The U.S. Coast Guard, working under a tight deadline imposed by Congress and pressured to develop its maritime security program in a manner consistent with the ISPS Code, latched onto a vague provision in the preamble to the MTSA stating that it is in the best interests of the United States to implement new international instruments that establish a maritime security system. Now is a good time to state that I concur with the view currently espoused by the Coast Guard that an international approach to maritime security is preferable to a unilateral approach. After all. I was one of those few voices crying in the wilderness back when the legislation was still in draft form.

The Coast Guard wrote both its interim regulations and its final regulations so as to be consistent with the international standard established by the ISPS Code and other amendments to the SOLAS Convention. It did this by exempting from the strictures of the vessel security plan requirements foreign ships that are subject to the SOLAS Convention and have on board a valid International Ship Security Certificate.

The Coast Guard has emphatically stated that it will utilize its Port State Control program to require full compliance by such ships will all applicable international security requirements. At the same time, the agency has stated that it does not want these foreign ships to submit security plans to it for review.

One of the reasons (although not the primary reason) that the Coast Guard does not want to receive any of the approximately 40.000 foreign vessel security plans is lack of resources. As is too often the case. Congress has handed the Coast Guard a major new mission and then failed to provide funding for the personnel and resources necessary to accomplish the mission. Senator Hollings (DSC) has been particularly vocal about this shortfall, but the appropriations committees have not been listening.

Congress, and in particular, the House Subcommittee on Coast Guard and Maritime Transportation, has challenged the Coast Guard repeatedly over the inconsistency between the regulations and the MTSA. On April 2, 2003. Representative Oberstar (D-MN), one of the principal authors of the MTSA, stated on the House floor: "We [Congress] did not intend the security of the Nation to be placed in hands of the flag of convenience registers. We expect the Coast Guard to review the plans firsthand." Senators McCain (R-AZ) and Hollings have requested the General Accounting Office (GAO) to investigate whether all requirements of the MTSA are being executed effectively.

The Coast Guard Subcommittee conducted oversight hearings on June 3 and July 22, 2003 into the Coast Guard's implementation of the MTSA. At both hearings, members criticized the approach taken by the agency in accepting flag administration approval of foreign vessel security plans. The Coast Guard, though, has not changed course.

The problem is not so much with the bureaucratic standoff between the Congress and the Coast Guard. After all.

most observers agree that the Coast Guard position is preferable and the Congress lacks its own enforcement capability. The difficulty lies with the foreign ship owner or operator who is stuck in the middle.

In the event that there is a transportation security incident (i.e.. a terrorist attack) in U.S. waters involving a foreign ship subject to SOLAS, things from a legal aspect will get very interesting. The owner will immediately file for limitation of liability.

At the same time, all third parties who have suffered damages as a result of the incident will file suit against the owner - not being able to sue the terrorists directly.

The court will have to determine whether the owner is eligible to limit liability. One of the steps in that process will be an analysis of whether the ship was in compliance with all applicable laws and regulations.

There is a high likelihood that, if the ship has not submitted a vessel security plan to the U.S. Coast Guard for review, as required by the MTSA, the owner will not be allowed to limit liability. This means, in effect, that the owner has wagered its entire company on the outcome of the litigation.

If anyone thinks this scenario is too fanciful to merit consideration. I suggest you look not at the terrorist attack on the French tanker LIMBURG in Yemen on October 6, 2002. but at the bombing of Pan Am flight 103 over Lockerbie. Scotland on December 21, 1988.

In subsequent civil litigation, Pan American Airlines was found liable for the wrongful death of the passengers and was not allowed to limit its liability. The airline, which subsequently went into bankruptcy and ceased operations, was found to have had an inadequate system for examining luggage at designated 'extraordinary security' airports. In other words, it failed to meet the regulatory and industry standards prevailing at that time. Massive civil liability and, ultimately, bankruptcy ensued.

Ship owners and operators should pay heed and comply with the requirements of both the MTSA and the U.S. Coast Guard maritime security regulations.

International ship security plans should be supplemented to meet the MTSA requirements and then submitted to the Coast Guard - despite the fact that the agency has said it does not want them.

Finally, and most importantly in the long run, the U.S. Coast Guard should belatedly return to Congress and seek an amendment to the MTSA to make it fully consistent with the SOLAS Convention and the ISPS Code. Atter all, maritime transportation is an international venture and terrorism knows no boundaries. A unilateral approach, such as that adopted in the MTSA.

is inadequate to resolve this problem. 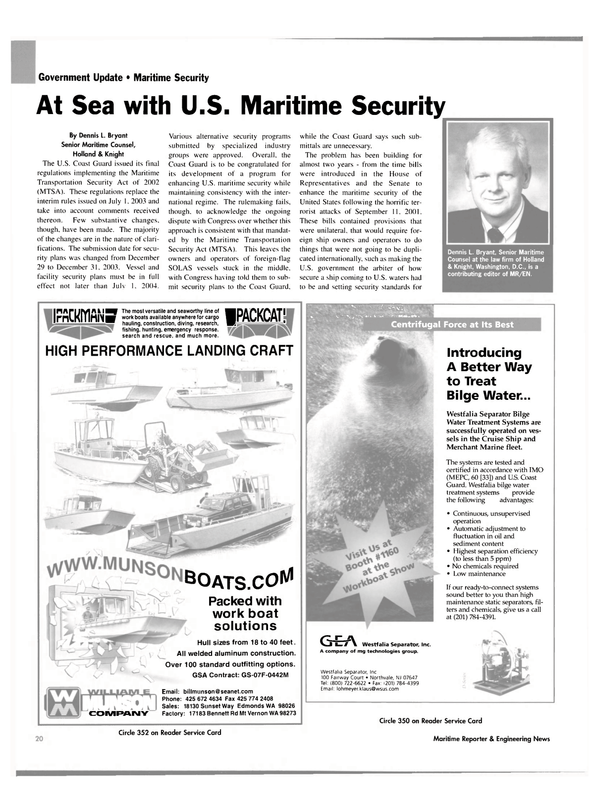