When the decision was made to convert Dockwise's Blue Marlin to the world's largest semi-submersible vessel, there were obviously many key considerations, with the re-powering of the new ship topping the list.

Wartsila was contracted for the job. which included supplying generating sets, two retractable bow thrusters and a large high-efficiency nozzle with new propeller blades for the main propulsion. Blue Marlin, originally built at CSBC in Kaohsiung. Taiwan (newbuilding 726) was delivered in 2000. equipped with one 6200 mm-diameter open Lips controllable pitch propeller, directly driven by a low-speed diesel engine delivering 12,640 kW at 127 rpm. One transverse thruster was installed in the bow of the ship.

The conversion was carried out at Hyundai Mipo Dockyard in South Korea, and included increasing the breadth of the ship from 137.8 to 206.7 ft. (42 to 63 m). With an enormous unobstructed deck area of 11,227 sq. m., the Blue Marlin is now the largest semisubmersible vessel in the world. The deadweight of the vessel is 78,000 tons.

World's Largest Bulker in for Fix Machine Support B.V. recently completed an stern tube alignment job on what is touted to be the world's largest dry bulk carrier, Berge Stahl, which is a 1,125-ft. (343 m) long and 213.2 ft. (65 m) wide ship that can hold 360,000 tons of iron ore. The carrier is fully dependent on the port of Rotterdam, since this is the only port on the European continent that this ship can access with its 75 ft. (23 m) draft.

Circle 65 on Reader Service Card enabling the vessel to transport heavy structures weighing up to 73,000 tons.

With its new dimensions Blue Marlin is able to transport heavier and ultra-large floating production and drilling platforms and larger semi-submersible drilling units.

The propulsion requirements for the much larger vessel were investigated in model tests at MARIN in the Netherlands. In the sea-keeping tests it became clear that the vessel required more thrust to operate safely, especially in adverse weather conditions. Wiirtsila won the contract to supply three Wiirtsila 8L32 generating sets and two electrically driven Lips retractable thrusters in September 2002.

The first commitment for the Blue Marlin in this top segment of the heavy transport market has already been made.

In the summer of 2004 the Blue Marlin will transport an ultra large and heavy semi-submersible Production Drilling and Quarters unit with a length of 163.8 m, a width of 125.89 m, a height of 129.1 m and a weight of approx. 60,000 tons. In addition the new vessel will be able to transport and dry-dock even larger semi-submersible and jack-up drilling rigs than have been possible in the past. 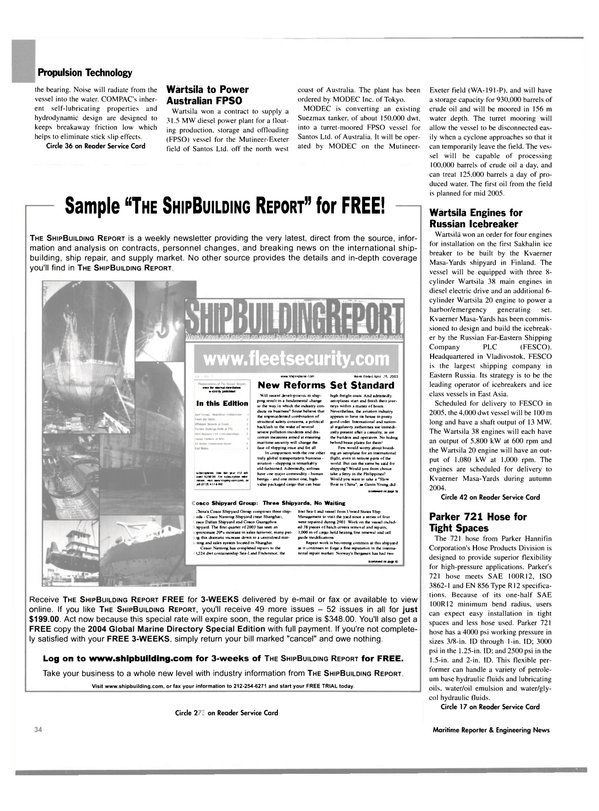 Read Converting and Repowering One Very Big Ship in Pdf, Flash or Html5 edition of May 2004 Maritime Reporter