Misplacing the Place of Refuge

On December 30, 2000, the tanker Castor was underway in the western Mediterranean Sea en route from Constanza, Romania to Lagos, Nigeria, carrying 29,470 tons of unleaded gasoline.

During a fierce winter storm, the ship developed a 22-m long crack across its main deck between frames 72 and 73, approximately midway along its 183.5 m length. For the next 24 days, the tanker fruitlessly sought permission to enter sheltered coastal waters of nations littoral to the Mediterranean. Its requests were rebuffed successively by Morocco, Spain, Gibraltar, Algeria, Tunisia, France, Italy, Malta, and Greece. Finally, on January 22, 2001, the cargo remaining on board was successfully lightered during a high seas transfer in international waters near Malta.

The concept of force majeure has been broadly accepted since mariners initially encountered the perils of the sea.

Persons and governments ashore have been obligated, at least by natural law, to accept and succor those in distress at sea. Concomitant with force majeure is the notion of providing a ship in distress with a place or port of refuge. A place of refugc.is where a ship could go to avoid or ameliorate the peril and then depart at the earliest opportunity. While the orig- inal need for gorce majeure and a place of refuge was ti reduce the risk to the lives of those on board the ship the con- cept naturally extended to the ship itself and any cargo it might be carrying.

Moral and legal support for the place of refuge were lost as a result of two unrelated but nearly contemporaneous events: first, the development and deployment of reliable long-range helicopters for maritime rescue purposes: and second, the grounding of the tanker Torrey Canyon in international waters off the southwest coast of England.

The first modern amphibious helicopter capable of regular rescue operations in the offshore marine environment was the Sikorsky HH-52A Seaguard. This aircraft could cruise at 98 miles per hour, had a range of 474 miles, and could carry ten passengers in addition to a crew of two. This meant that it could transit far offshore and remove a large portion of the crew of a ship in distress without waiting for the ship to get close to the coast. While it was not realized at the time, the deployment of this helicopter starting "in 1962 signaled the beginning of the end of the need forships in distress to come into port or sheltered water in order to save the lives of the crew. Rescue helicopters in use today are even faster, here longer range and are capable of carrying greater payloads.

The concern for safety of the crew, the basic and original rationale for force majeure, has been largely eliminated in the coastal waters of many nations.

Coastal nations of the world suffered a rude awakening on March 18, 1967 when the supertanker Torrey Canyon ran aground in international waters off Lands End, Cornwall.

Until then, it was widely believed that they could adequately deal with oil tankers and other ships because the only places that trouble arose as regards coastal nations was in their ports or immediately offshore. Both areas were within the territory of the coastal nation (then generally recognized as the land and all waters within three nautical miles of shore). The coastal nation could exercise its sovereign powers and take appropriate action.

The Torrey Canyon incident, though, occurred more than three miles off the coast of the United Kingdom. Yet, its impact was clearly felt by both the United Kingdom and France. Beaches were closed; fisheries were shut down; and people downwind were advised to .stay indoors because otthefumes. After three days of a losing fight to contain the spill and with the tanker satrting to break up, Britain did the unthinkable: it called in the Roval Navy and the Royal Air Force to bomb the Torrey Canyon and set its remaining oil on fire. While the world was not outraged by this act of 'war', it was stunned.

This incident awakened the world to the new reality that damages that could be inflicted by a modern cargo vessel might far exceed the value of the ship and its freight. This was a major reversal of the days when unscrupulous 'wreckers' might lure unsuspecting ships onto shore so as to loot the cargo. Now ships in trouble risk becoming pariahs.

International law, like other social phenomena, is often developed in reac- tion to traumatic events. In the after- math of the Torrey Canyon disaster, as other nations realized that the same catastrophe could strike them, there was broad agreement that the action under- taken unilatelly by Britain should be codified in the event of future need. An international conference was convened by the Inter-governmental Maritime Consultative Organization (IMCO), a specialized agency of the United Nations. The conference met in Brussels and adopted the International Convention relating to Intervention on the High Seas in Cases of Oil Pollution Casualties, 1969 (Intervention Convention).

The Intervention Convention establishes a regime within which a coastal nation can take action against a foreign vessel on the high seas threatening to pollute its coasts or its waters. While consultation with the flag State of the vessel and other States that might be affected by the casualty is strongly encouraged, such consultation is not required in an emergency. The coastal nation is also encouraged to consult with the owner and operator of the ship, but again this consultation is not required in an emergency.

Under U.S. law, a tanker is not authorized to operate in the navigable waters of the United States if, among other things, it is discharging oil in violation of U.S. law. While the Coast Guard could still allow entry under the concept of force majeure, the burden is on the owner or operator to prove that entry would result in correction of the condition causing the distress. While the owner or operator may assert that entry within twelve nautical miles of the U.S.

coast might alleviate the situation, this would be difficult to prove. Further, the availability of long-range rescue helicopters will minimize the peril to the lives of the crew. Thus, a Coast Guard decision to deny the ship permission to enter the navigable waters of the United States will be consistent with federal law.

On December 15, 1976, while en route from Venezuela to Salem, Massachusetts with a cargo of 28,000 tons of crude oil, the tanker Argo Merchant grounded on the Nantucket Shoals, approximately 25 miles southeast of Nantucket Island. The Coast Guard denied a request by the master to dump some of the cargo in an attempt to refloat the ship. Soon thereafter, the tanker broke in two in heavy weather.

The Coast Guard sank the bow section utilizing 20 mm cannon fire. The stern section eventually sank on its own.

Currents carried almost all the oil out to sea and away from shore. The Coast Guard's actions were consistent with domestic and international law.

In the United Kingdom, broad powers to take action against a ship that presents a threat of pollution to UK waters are vested in the Secretary of State. The Secretary is entitled to give directions for the purpose of preventing oil pollution as respects a ship or its cargo. This authority may be exercised when an accident has occurred to or in a ship, oil from the ship will or may cause significant pollution in the United Kingdom waters or pollution zone, and, in the opinion of the Secretary of State, use of the powers is urgently needed. The Secretary may give directions to the owner, any person in possession, the master, or any salvor. Such directions may require the person to whom they are given to take, or refrain from taking, any action and may require that the ship is to be moved, or is not to be moved, to a specified place; that the ship is not to be moved over a specified route; that any oil or other cargo is to be, or is not to be, unloaded or discharged; and that specified salvage measures are to be, or are not to be, taken. If these powers prove to be inadequate, the Secretary is authorized to take additional action to prevent or reduce oil pollution including undertaking operations for the sinking or destruction of the ship and undertaking operations that involve the taking over of control of the ship. These powers may be exercised within the UK territorial waters, UK Exclusive Economic Zone (EEZ), or those waters superadjacent to the UK Continental Shelf.

Legislation similar to that enacted by the United Kingdom is in place in Ireland, Australia, New Zealand, South Africa, Canada, and Malta.

Various efforts have recently commenced to resurrect the "place of refuge".

In the aftermath of several marine casualties off the coast of Europe, the European Parliament and the Council issued a Directive establishing a Community vessel traffic monitoring and information system.

Among other things, the Directive provides: Non-availability of a place of refuge may have serious consequences in the event of an accident at sea.

Member States should therefore draw up plans whereby ships in distress may, if the situation so requires, be given refuge in their ports or any other sheltered area in the best conditions possible. Where necessary and feasible, these plans should include the provision of adequate means and facilities for assistance, salvage and pollution response. Ports accommodating a ship in distress should be able to rely on prompt compensation for any costs and damage involved in this operation.

The Commission should therefore examine the possibilities for introducing an adequate system of compensation for ports in the Community accommodating a ship in distress and the feasibility of requiring a ship coming to a Community port to be adequately insured.

On December 5, 2003, the IMO Assembly adopted a resolution entitled "Guidelines on Places of Refuge for Ships in Need of Assistance." The resolution includes guidelines for masters or salvors in need of places of refuge and guidelines for actions expected of coastal states. The resolution explicitly recognizes the authority of the coastal state to exercise its authority in taking responsive action appropriate to the threat presented by the ship. Among the factors to be considered by the coastal state are the seaworthiness of the ship; the nature and condition of its cargo; and provisions of financial security. Most significantly, the resolution states; When permission to access a place of refuge is requested, there is no obligation for the coastal State to grant it, but the coastal State should weigh all the factors and risks in a balanced manner and give shelter whenever reasonably possible.

We lost the place of refuge as a result of inattention during the 1960's. When the law of the sea was codified in 1982, the concept was not even mentioned. The value of a place of refuge has belatedly been acknowledged.

It is now incumbent upon the maritime community to reinvigorate the concept and get it reincorporated into the law of nations.

We must approach our national governments and seek development of a process for responding to requests by ships in distress for access to a place of refuge. This does not mean that all requests will be granted, but it does (or should) mean that there will be someone to whom such requests will be addressed and there will be a regularized system for considering and acting upon the request. The ship in distress deserves to have its request fairly and rationally considered.

The nations of the world owe its mariners nothing less. 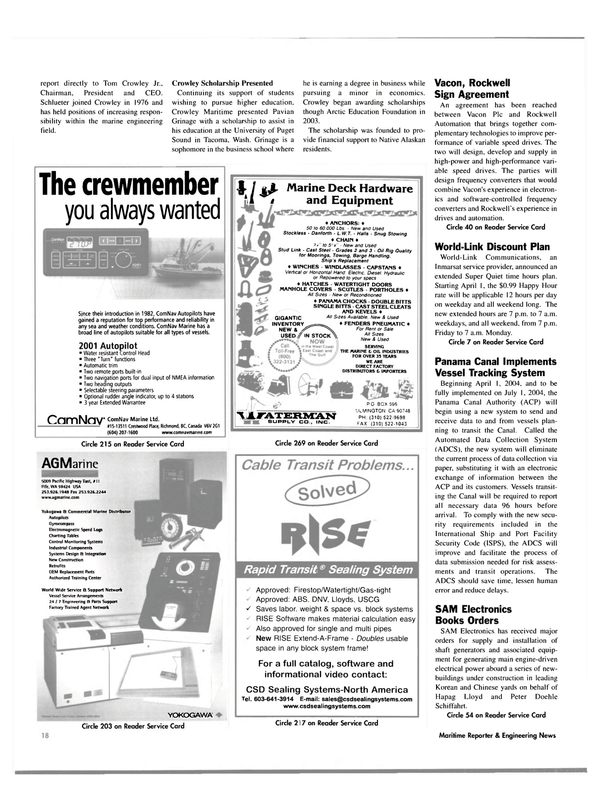 Read Misplacing the Place of Refuge in Pdf, Flash or Html5 edition of May 2004 Maritime Reporter