Damen Shipyards Gorinchem recently delivered a pair of Stan Tug 2608s — Ilha de Sao Luis and O Bravo — in fulfilment of its contract with Adminstracao dos Portos, which was signed in June 2003. The vessels are for operation in the Port of Horta and the Port of Praia da Vitoria. The first vessel was delivered in February 2004 and the second vessel in March 2004. The pair were built from stock hulls with the yard numbers 509805 and 509806. Both vessels will be used for mooring operations, coastal towing and fire fighting operations.

The Damen Stan Tug 2608 has a single chine bilge. The transom corners are well rounded and the vessel has sufficient bow height for severe working conditions. The hull is divided into four compartments and is of a very strong construction with side and bottom plating of 10 mm and decks of 8 mm thickness.

The sheerstrake has a plate thickness of 20 mm.

The aft deck is suitable for a specific weight of two tons per square meter and is designed to carry loads up to approximately 20 tons. The superstructure has ample space for a separate galley and mess room.

The accommodation is suitable for a crew of nine, with the captain's cabin and the chief engineer's cabin on the main deck.

Below the main deck, two double crew cabins and a triple crew cabin are arranged. Furthermore a large store is fitted. The complete accommodation and the wheelhouse are air-conditioned.

Each nozzle is provided with a stainless steel inner ring. Reintjes reverse/reduction gearboxes are fitted, type WAF 562L, with a reduction ratio of 5.05:1.

The navigation equipment consists of a Furuno radar, type FR-1505 mk III, a Furuno GP-80 GPS navigator and a Furuno GD-1700 chart plotter with echo sounder. The autopilot is of the make Radio Zeeland, type Seapilot 75. The vessels were classified by Lloyd's Register of Shipping. 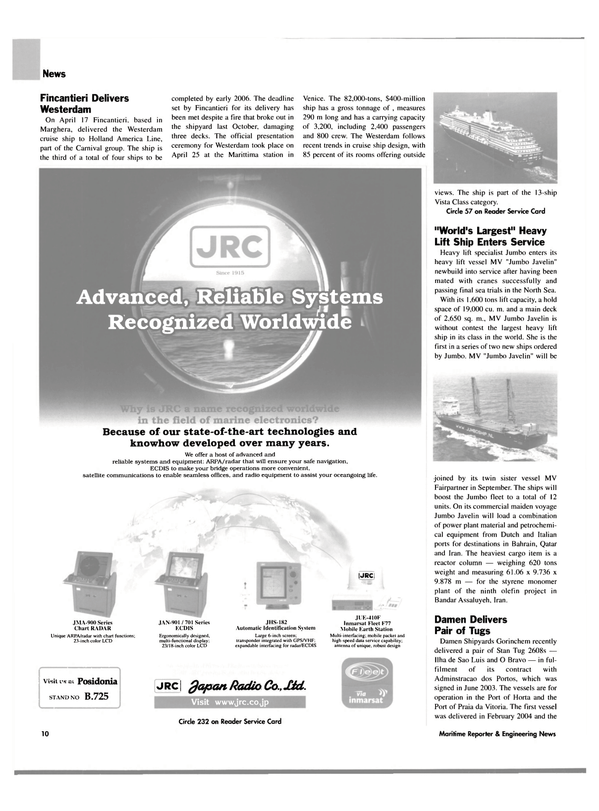 Read Damen Delivers Pair of Tugs in Pdf, Flash or Html5 edition of May 2004 Maritime Reporter