Not Just Another Dam Ship

In 2003, Holland America (HAL) added another "Dam" ship to its fleet in the form of the 82,000-gt MS Oosterdam. Oosterdam — built at the Fincantieri shipyard in Marghera, Italy — is the second 1,848 passenger Vista-class ship for the company, joining sister ship ms Zuiderdam, which debuted in December 2002. The 951 -ft. ship, delivered in July 2003 in Rotterdam, was introduced with an inaugural sailing out of Port Everglades in December 2003. Upon first glance of the interior of the ship, the European influence, distinctive decor, influx of amenities and impeccable service embodies the cruiseline's $225 million Signature of Excellence initiative. Frans Dingemans.

along with a team of architects and designers, molded the unique ambiance aboard the latest HAL ships.

Along with Dingemans' original designs. HAL ships, including the Oosterdam, showcase millions of dollars worth of antiques and old master artworks. Perhaps the most notable difference between Oosterdam and its sistership is the color scheme and the ambiance. The Zuiderdam, which infuses a brighter color palette differs from the more subtle Oosterdam. While the new Vista class ships share an aesthetic beauty, the technical modifications provide a different realm of sophistication.

Among the technical advancements for the Vista-class ships includes adding a gas turbine to the vessel. According to HAL, the gas turbines allows for use of one less diesel engine, so it has five 16-cylinder Sulzer medium speed diesel power plants. The Oosterdam sails at 24 knots, driven by a pair of 17.4- MW Azipods.

The design of the engine room adds to the innovative advancements. The engines are situated in two separate spaces that can be completely closed off from each other so that in the event of an emergency in one engine room, power systems in the other will still provide sufficient propulsion and electrical power to return the ship safely to port. The GE gas turbine also located in a separate space provides a third backup system and allows the ship to operate without visible pollution in sensitive areas such as Alaska.

According to Stein Kruse. senior vice president of fleet operations, "the ms Oosterdam. represents the very latest thinking in ship-building technology, from navigational tools to environmental protection." The multi-million dollar Rochem sewage system enables the Oosterdam to have little impact on the environment. The system allows the gray water to be recycled and used for various technical aspects on the ship such as cooling water. HAL continues to work on a system that will allow the ships to recycle ballast water. Like its sister. Oosterdam boasts a spacious design for public areas and staterooms where 85 percent of its staterooms have ocean views, with 67 percent of all staterooms sporting verandahs.

Oosterdam is lucky number 13 in the Dam fleet, with two more on the way. HAL recently announced that the line's fourth Vista-class ship, scheduled for delivery in January 2006. will be named MS Noordam. 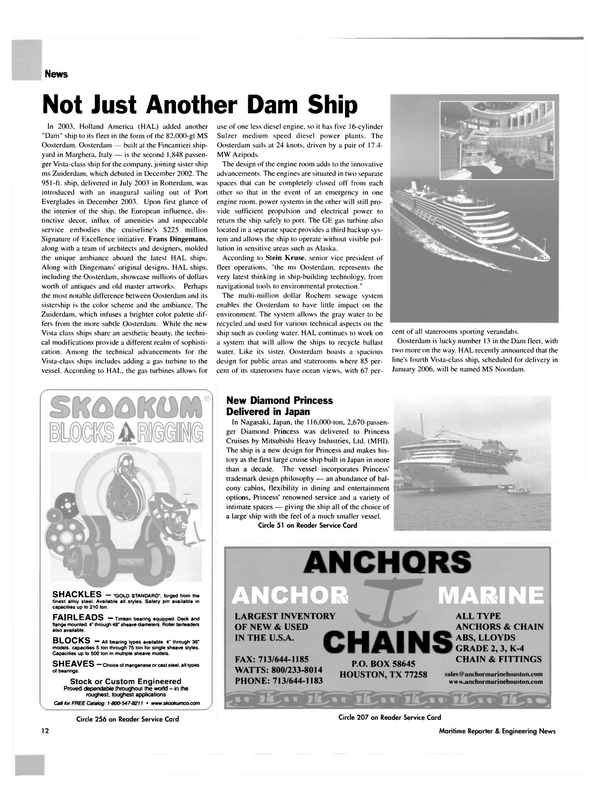 Read Not Just Another Dam Ship in Pdf, Flash or Html5 edition of May 2004 Maritime Reporter