German engineers have strengthened the Schottel offering through the development of a propulsor which melds technical design and performance features of the company's proprietary, azimuthing Rudderpropeller series with those of electric podded drives. The resulting hybrid system, known as the Schottel Combi Drive (SCD) and distinguished by its compactness and inboard placement of the integral electric motor, has been designed for unit power applications in the 1,900 to 3,800-kW range.

Whereas podded electric propulsors incorporate the drive motor within the underwater pod nacelle, the Combi Drive has been conceived with the electric motor integrated vertically into the support tube of its Rudderpropeller body, so that it lies within the aft hull body. The arrangements provide a response to a market requirement for a 360-degree steerable propulsion unit conferring performance properties akin to those of a pod, but with the electric motor located inside the ship rather than in an underwater appendage.

The position of the electric motor renders the Combi-Drive concept similar to that of a Rudderpropeller with a vertical power input (the so-called 'L system').

Compactness and ease of installation, important attributes from both a ship design and newbuild construction standpoint, are enhanced by the freedom from either an above-water gearbox or a cardan shaft. Schottel believes that the minimum, in-board space requirement of the new system will prove particularly advantageous for support vessels and other applications where available volume at the aft end of the hull is extremely limited. The uptake of diesel-electric power and propulsion solutions in certain quarters of the offshore service sector, not least among Norwegian fleet operators, is expected to stimulate interest in the Combi-Drive design, which is also suited to a range of other vessel types where maneuvering qualities and hull space availability are pressing considerations.

The SCD family, for which the first contracts are being sought, is based on the Rudderpropeller SRP 1515, SRP 2020 and SRP 3030 types, with their proven mechanical components. The new drive system encompasses single, nozzled propeller and twin propeller variants, covering propulsive power delivery needs up to 3,800-kW using propellers from 2,500 to 3,500-mm in diameter. The single propeller type with nozzle, most akin to the standard Rudderpropeller, has been released in 1,900-kW, 2,500-kW and 3,300-kW versions as the SCD 1515, SCD 2020 and SCD 3030 models, respectively. The corresponding twin propeller models, reminiscent of the Schottel Twin Propeller (STP) designs, offer outputs of 2,100-kW, 2,700-kW and 3,800-kW at higher running speeds than the singlescrew units. As with the STP series, both propellers in the SCD twin-propeller unit are mounted on one shaft rotating in the same direction. The azimuth steering can be implemented using either hydraulic or electric motors.

Recent examples of electric drive applied to proven Schottel propulsion systems include the installations nominated for a series of four diminutive gas carriers ordered from the De Poli shipyard in Venice-Pellestrina by Italian interests. Each 1,900-dwt newbuild, embodying a cargo volume of some 3,00()-cu. m., has been specified with two STP 1010 L-drive Twin Propeller units, using two relatively small propellers of 2,150-millimetre diameter in each unit. The extremely compact installation relies on power delivery to each STP by an electric motor with direct vertical coupling, yielding 1,050-kW apiece at 720-rpm, giving a contract speed of 13.5-knots.

Space-saving, efficiency and maneuverability characteristics had a signal bearing on the choice of STPs with electric drive for the Italian gas tankers, contracted for Mediterranean operations with Stargas. Model vessel tank tests had indicated that performance with the chosen system would be equal to that with similar propulsion units incorporating a single 2,538-mm diameter propeller in each case. The STP Twin Propeller solution therefore obviated the need for an 18-percent larger single propeller, and making it possible for cargocarrying volume to be increased.

Schottel equipment with electric drive was also incorporated in a 94-m icebreaking supply ship delivered for duties in the shallow waters of the northern Caspian Sea. Built in Norway by Ulstein Verft for BUE Marine of the UK, the vessel is fitted with two pullingtype Rudderpropellers powered by frequency- controlled electric motors.

Schottel propulsors have also been specified for the first diesel-electric offshore supply ships ordered to date for Chinese owners. Diesel-electric propulsion has been selected so far for two in a series of eight 69-m newbuilds entrusted to two Chinese yards Meanwhile, the German propulsion specialist is chasing fresh business for the Siemens-Schottel Propulsor (SSP) pod series and the in-house developed, smaller Schottel Electric Propulsor (SEP) system, which is due to make its seagoing debut in August 2004. The first operational reference for the SEP will be provided by the German Water Board's 69-m multipurpose newbuild Stephan Jantzen, installed with two such pods of 1,850-kW apiece. Conceived for oil spill attendance, coastguard and rescue duties in the Baltic, the icebreaking, multi-role vessel is under construction by Peene- Werft at Wolgast. in the eastern part of Germany. The two other contracts to date for the SEP system have arisen from the newbuild project for the 94-m ice-fringe research ship Maria S.

The expansion of the traditional Schottel range in recent years to include large, electric propulsion systems and other equipment was preceded by the takeover of Wismar Propeller- und Maschinenbau (WPM), and DM20 million expenditure on the modernization and expansion of production capacity at the Wismar site. The investment has been vindicated, since it has allowed Schottel to penetrate new areas of the market while reinforcing its position in established sectors. The purchase of WPM, integrated into the group as Schottel-Schiffsmachinen, was motivated by the group's development of its product range, and by the space constraints of Schottel's Spay premises on the Rhine.

The flexible workstation can produce a shaft in one job. the single machine undertaking all turning, boring, gearing and milling. Wismar had concentrated on controllable pitch propeller systems and rudders in the days of WPM, and is now also the production point for Schottel's largest Rudderpropellers.

While Spay retains a manufacturing role, complemented by its pivotal design function, the group's wholly-owned Chinese subsidiary at Suzhou has assumed production responsibility for the smallest Rudderpropellers and transverse thrusters, plus components for larger systems, serving both the Chinese market and export destinations. 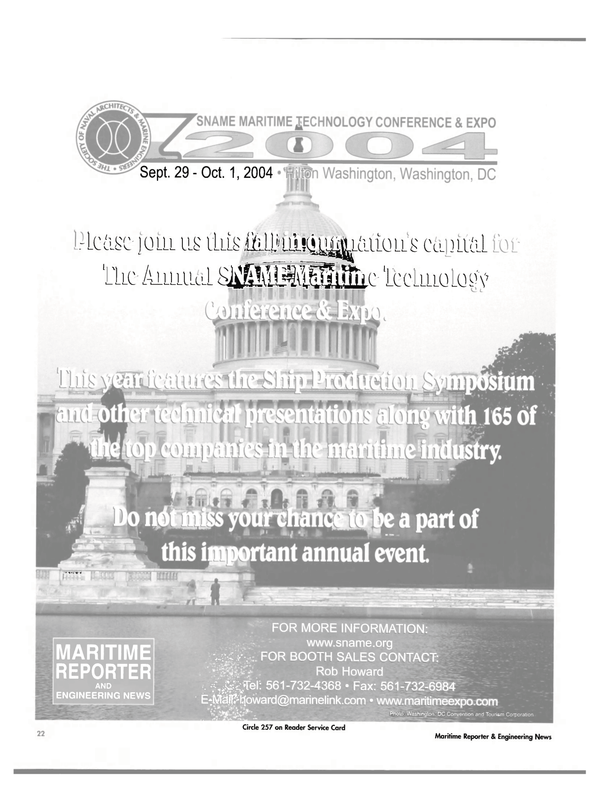