Waterjets for a Difficult Design Task

The idea of a ferry going over the sea to Skye is not a new one, although with the Skye bridge opening a few years ago. it is not an adventure many people undertake these days. A small car ferry operates in the south of the island, and a large car ferry takes people over from Uig in the north west corner of Skye to the Outer Hebridian islands of Lewis and Barra. There had however, long been talk of a possible passenger service linking the North of Skye to the Scottish mainland at Gairloch. A feasibility study was carried out by the local council, after which some local businessmen pulled together to form a new company in 2003 called West Highland Seaways Ltd.. trading as 6° West.

The requirement to make the route successful was that the journey must be done four times per day, in an hour and a half, requiring an average speed of 18 knots. The journey must be comfortable, but in a craft that could handle the rough sea conditions. While existing designs were offered with modifications to meet the new EU regulations on the safety of Passenger Vessels, they tended to be relatively heavy displacement vessels, which required excessive power and fuel consumption to achieve the 18 knots required.

Ace Marine were approached, and responded with a new concept in boat design that was designed to be low cost, lightweight and comfortable, with reconditioned airline seats. The designer molded a relatively narrow hard chine planing hull form around six rows of seats with the intention of delivering excellent sea keeping qualities, both at speed, and at loitering speeds.

The client specified a pair of Cummins engines for redundancy. The 26-in.

diameter propellers required to push the vessel at 18-20 knots meant long shafts with brackets, and exposed rudders. In order to protect the propellers and rudders for beaching purposes, the designer added a long and deep sloping keel. The whole effect was unsatisfactory. Waterjets were investigated and the initial findings were not encouraging. They appeared expensive and inefficient below 25 knots.

However, the designer found Ultrajet units, which met price and performance requirements.

The vessel was designed in 3-D using Maxsurf Pro from formation design, with hydrostatics, damage stability, and one compartment flooding checked with Hydromax Pro. All plates were defined without recourse to complex curvature, and developed using Workshop.

The dxf plate outlines were then sent to the yard, where they were nested and then cut using their CNC plasma cutter. The vessel was being built at Sandy Morrison Engineering in Uig, Isle of Skye, was scheduled for delivery this month. 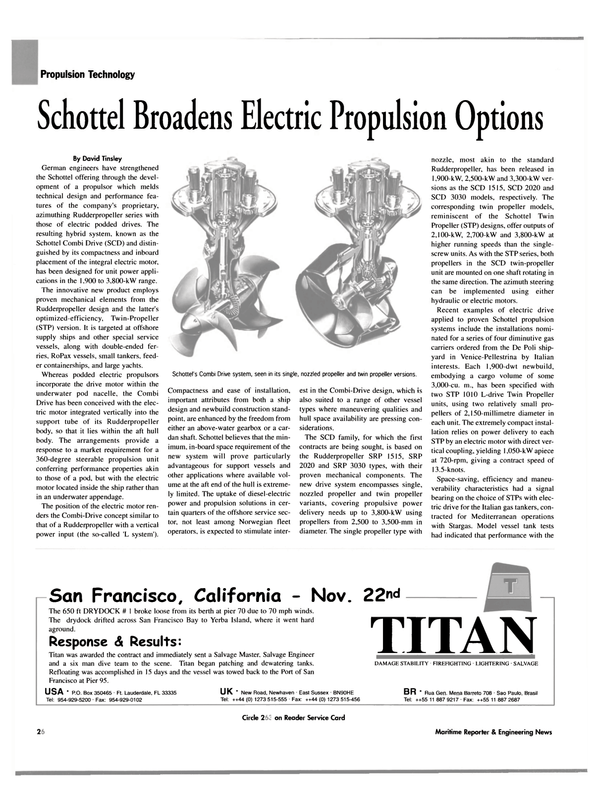 Read Waterjets for a Difficult Design Task in Pdf, Flash or Html5 edition of May 2004 Maritime Reporter