Power for a New Breed of RoPax

Building fast RoPax vessels is nothing new for Australia's Austal Ships. The company, founded just 16 years ago. has quickly crafted a reputation as one of the largest and best builders of aluminum craft in the world, and today boasts an annual turnover in excess of $250 million.

Spirit of Ontario, however, is in a different league.

The ship arrived last month from its birth place Down Under to start work for Canadian American Transportation System on the commuter route between Rochester. NY. and Toronto, ON. Its inaugural route to work took it on tours through the Hawaiian Islands and eventually to Pier 17 at New York City's South Street Seaport, allowing Austal.

MTU, Wartsilii. ZF and Germanischer Lloyd executives the opportunity to discuss the ship as a commercial option in the burgeoning U.S. fast ferry market, as well as point out the ship's endless military potential on the eve of the awarding of the Littoral Combat Ship (LCS) contract.

A Breed Apart Spirit of Ontario stands out amongst an increasingly cluttered field of fast craft contenders. Based on the popular Auto Express 86 design, a 284-ft. (86.6 m). 774-passenger, 238-vehicle vessel capable of carrying its full load at 45.6 knots. While Austal stakes its leadership claim, Chris Pemberton. Vice President, Sales and Marketing for Austal USA. is quick to point out that success was not built alone, citing a long and mutually beneficial relationship with primary power supplier MTU, among others.

"Fast ferries are our forte" and we have an approximate 60 percent market share, said Bernard Bentgen. Vice President, Marine Sales in NAFTA for MTU. "High power density, advanced technology, reliability, and expert service and support are the most important criteria to high-speed shipbuilders." It is, in fact, the MTU powerplants that help make this vessel special, as four of its state-of-the-art MTU 20V 8000 M70s, generating a cumulative 44.000 hp (32,800 kW) at a rated speed of 1150 rpm, is a core component of its success.

Power without performance is useless in the commercial market, so it is worthy to note that fuel consumption is below 195 g/kWh across a very broad power range and less than 190g/kWh at the most economical point, while keeping NOx emissions below the limits required by IMO.

MTU has had a 14-year relationship with Austal. and in that time has produced 250 engines for the company.

Beyond the propulsion. Spirit of Ontario offers a host of amenities aimed at keeping the vessel safe, efficient and comfortable for both crew and passengers.

Roll-on/roll-off capabilities allow for a fast loading of the two vehicle decks, with Pemberton estimating a loading time of approximately 15 minutes. The two passenger decks are equipped with business travel amenities such as restaurants.

bars, two movie theatres, and a variety of seating arrangements as well as satellite TV and Internet access.

Market Opportunities According to a survey conducted by the Volpe National Transportation Systems Center in Cambridge, Mass..

high-speed ferries account for only 10 percent of the overall national U.S. ferry fleet. With the option of taking cars, buses and trucks on board, more and more coastal and waterway communities will demand fast ferry transportation to keep traffic afloat.

High speed car ferries in the U.S. are starting to emerge, with the Great Lakes.

Hawaii and areas around large cities the primary targets for these vessels, said Pemberton.

"Austal USA has already successfully completed six vessels including two high speed passenger catamarans that are operating here in New York," said Pemberton. "We now have the capability to produce vessels such as 'Spirit of Ontario 1'. which was built by Austal in Australia, here in the U.S. In fact less than two weeks ago we launched our largest ferry yet. a 58-m catamaran that will operate across Lake Michigan for Lake Express LLC." Austal and MTU have successfully partnered on a number of other projects.

This fall. Austal will launch one of the world's largest high-speed ferries - a 126-m high-speed trimaran accommodating 1,350 passengers and over 340 cars - which will be taking up service in the Canary Islands for the Spanish ferry operator Fred. Olsen. SA. This vessel, on which the Littoral Combat Ship design is based, will be powered by four MTU 20V Series 8000 diesel engines.

Four MTU 16V Series 4000 engines will power the Lake Express ferry which has capacity for 248 passengers and 46 cars. With a speed of 34 knots, it will link Milwaukee. Wis. and Muskegon, Mich, in just over two hours, saving a lengthy drive around the southern shore of Lake Michigan, which includes the traffic congestion in Chicago.

High-powered multi-hull ships are the perfect candidate for public waterway transportation, coast guard and police patrols as well as military programs such as the Littoral Combat Ship or the Theatre Support Vessel.

Last year Austal was awarded a contract to build 12 new patrol boats for the Royal Australian Navy (RAN). It is anticipated that these 56-meter vessels will each be fitted with two MTU 16V Series 4000 diesel engines, continuing a long association between MTU and the RAN.

"The U.S. Marine Corps have been using a large Austal catamaran as a troop and equipment transporter for nearly three years with great success and we have also designed a revolutionary trimaran platform for the General Dynamics bid for the Navy's Littoral Combat Ship project," said Pemberton. "We are also currently building 22 naval patrol boats at Austal Ships in Australia." For more information from Austal Circle 9 on Reader Service Card For more information from MTU Circle 10 on Reader Service Card 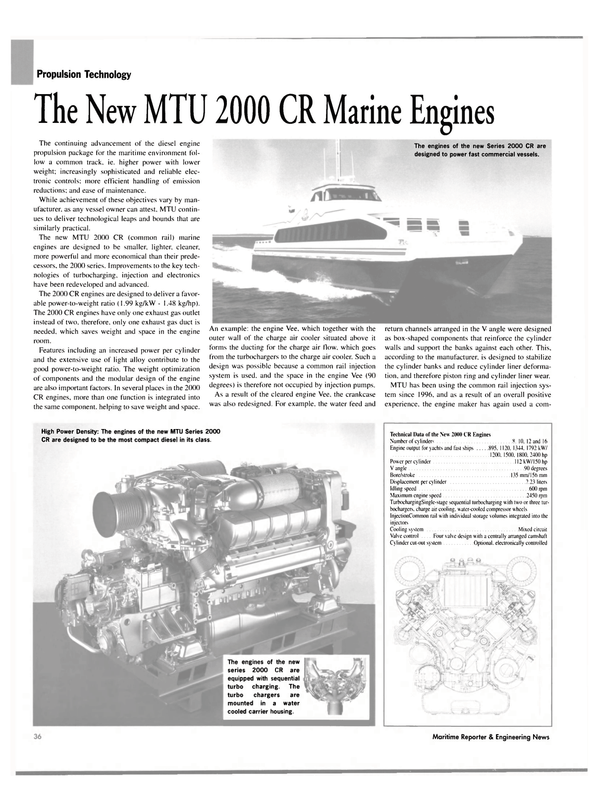 Read Power for a New Breed of RoPax in Pdf, Flash or Html5 edition of May 2004 Maritime Reporter