The responsibility to maintain design fuel rates over the service life of a marine steam powerplant rests with the o p e r a t o r . With good plant management, this task is usually accomplished by a combination of frequent periodic adjustment of the equipment controlling powerplant efficiency, and by regular maintenance of major components.

Of the numerous monitoring points associated with main-propulsion boilers, the following are considered to be the most important parameters affecting powerplant efficiency as measured by the s p e c i f i c fuel consumption: excess-air fired, superheater outlet temperature, superheater outlet pressure, and stack temperature.

Other parameters, such as feed temperature j.-nd ambient air temperature, affect the boiler output and the cycle efficiency, but are not controlled by the boiler system.

Deviations from design excess air and boiler outlet pressure are governed by c o n t r o l systems which may be adjusted by the operating personnel. The superheater outlet temperature may also deviate from design through improper control or from deterioration of superheater surface, in which case the design temperature cannot be restored without cleaning or restoration of the component itself. The stack temperature reflects the overall cleanliness of the entire boiler, including h e a t - r e c o v e r y surface, and cannot be adjusted with controls (assuming the design excess-air level is maintained).

Excess-Air Deviation—The achievable excess-air level for a given marine boiler is a function of furnace c o n f i g u r a t i o n , the amount of fuel fired per unit furnace volume, and the oil-burner characteristics. In general, the design value, specified by the purchaser, includes some margin for operation with s l i g h t l y worn burner tips or with fuel-oil viscosities and atomizing steam conditions which are not quite optimum.

The design excess-air level maintained by the combustioncontrol system must also include margins for the following conditions : 1. Under steady steaming conditions, the combustion-control system may hunt cyclicly above and below the set point value by one or two percent excess air. Alternating torque loadings from the propeller, especially during pitching of the vessel, can also cause significant cyclic variations in the excess air maintained by the control system.

2. Under changing load conditions, such as maneuvering, sufficient margin on excess air must be provided to prevent smoking during the transient.

Flue-gas testing c a r r i e d out aboard ship with the traditional ORSAT type of analyzer emphasizes the measurement of carbondioxide content of the flue gas, with oxygen and carbon monoxide determined to a lesser degree of accuracy because of the proportionally smaller amounts present.

It is most desirable to measure the oxygen content of flue gas accurately since this parameter is not dependent on fuel composition, as is carbon-dioxide content.

Excess-air values can be accurately determined from the oxygen content of the flue gas without any knowledge of the fuel composition, a definite advantage for shipboard monitoring.

The following procedure used by the author's company on several shipboard tests appears to be readily adaptable to periodic monitoring of the combustion-control system and burners by operating personnel: 1. Obtain an oxygen analyzer which can give continuous readings of oxygen content and can be readily calibrated with air.

2. F a b r i c a t e a portable gassampling probe from ^-inch diameter stainless-steel tubing by drilling small holes along the portion of the probe to be inserted into the gas stream.

3. Install a sampling penetration in the uptake ducting below the economizer or regenerative air heater. This may consist of a i/o-inch pipe nipple threaded into the duct and fitted with a Vi-inch O.D. compression adapter that is normally plugged.

4. When a periodic check of combustion-system performance is desired, the plug can be removed from the compression fitting, the probe inserted into the gas stream, and a continuous readout of oxygen content can be obtained from the portable analyzer.

The amount of excess air fired in a boiler has an impact on the long-term material condition of boiler components related to thermal performance. In the superheater area, excess air is related to the rate of high-temperature corrosion of superheater tubing materials exposed to vanadium compounds.

In the economizer or regenerative air heater, the amount of excess air is related to the corrosion of heat-recovery surface exposed to sulfuric acid in the flue gas. Metal surfaces at temperatures below the sulfuric-acid dewpoint will condense concentrated acid onto the surface. In general, the lower the metal temperature is oelow the dewpoint, the greater the rate of corrosion.

A reduction of excess air from 15 percent to 5 percent causes a reduction in sulfuric-acid dewpoint of about 10°F. Regenerative airheater corrosion appears to be more d e f i n i t e l y influenced by excess-air level so that failure to maintain design excess-air could produce a significant deterioration of air-heater p e r f o r m a n c e , and specific fuel consumption, over a long period of time.

Aside from the long-term aspects of boiler component replacement, the amount of excess air has an immediate effect on both the boiler efficiency and the powerplant cycle fuel rate. Increasing the amount of excess air above the design value causes an increase in stack temperature, an increase in stack losses from the additional mass of heated gas leaving the boiler, and an increase in p o w e r c o n s u m p t i o n for the forced-draft fans. For an increase in excess air of 10 percent above design value (e.g., firing 20 percent excess air in a cycle with design excess air of 10 percent), the increase in specific fuel rate is approximately 0.65 percent. For a vessel with an annual fuel consumption cost of $3,000,000, operation with excess air 5 percent above design level throughout the year would cost up to $9,100 per year. This figure is based on the simplifying assumption that 95 percent of the fuel used annually is consumed at the full-power rating.

Superheater Outlet Temperature Deviation — Excursions in s u p e r h e a t e r outlet temperature can be caused by improper adjustment of the control desuperheater, if fitted, or by severe slag accumulation over a period of time.

Although the operator observes superheater outlet temperature on a continuous basis, the accuracy of the ship's instruments can reasonably be questioned. Remote temperature gages can easily be 30°F to 50°F (17°C to 28°C) out of calibration after months of operation.

The technique used by the author's company during shipboard tests on vessels in service is recommended for use by the vessel's operators for checking and informal calibration over a wide range of temperatures.

Sheathed Chromel-Alumel (Hoskins M a n u f a c t u r i n g Company) (Type K) thermocouple probes are connected by a short length of wire to a portable digital indicator (potentiometer). Several pocket-size indicators on the market are compatible with Type K thermocouples, have built-in reference junction circuitry, ambient compensation, rechargeable batteries, and cover a range of t e m p e r a t u r e s from - 6 0 ° F to 2,000°F (— 51°C to 1 , 0 9 4 ° C ) .

These devices require no adjustment and give a reasonably accurate readout of the probe temperature at the flick of a button.

A small thermocouple probe, %-inch diameter by 0.12-inch long (3 mm by 305 mm), responds readily to temperature transients and can be inserted into existing thermowells in the piping by temporarily disconnecting the ship's instrument probe. In this way, the control d e s u p e r h e a t e r setpoint may be adjusted periodically to maintain the proper design value of superheater outlet temperature at full load.

It has been observed that superheater outlet temperatures on some relatively new vessels are maintained 10°F to 20°F (6°C to 11 °C) below design solely because of instrumentation error. A reduction of 20°F (11°C) from design value increases the specific fuel rate by almost 0.5 percent.

It should be noted that other conditions, such as severe slagging or burnout of refractory baffles, can cause reductions in steam temperature of 30°F and 60°F (17°C and 33°C). An additional technique for controlling severe slagging has been recently tested aboard ship. The addition of between 6 percent and 10 percent water to the fuel in a homogenizing process appears to *Mr. Mastronarde, senior engineer, C-E Marine Power Systems, Combustion Engineering, Inc., Windsor, Conn., presented the paper condensed here at the Symposium on Sustaining Design Thermal Performance of Ship Propulsion Machinery held at The United States Merchant Marine Academy, Kings Point, N.Y.

reduce the amount of slag adhering to superheater tubes. While a significant restoration of design steam temperature has been reported by using this technique, the results are considered preliminary and will undoubtedly be the subject of further intensive study.

Superheater Outlet Pressure Deviation — The design superheater outlet pressure maintained by the combustion-control system should be checked p e r i o d i c a l ly with a calibrated pressure gage.

Safety valves should be regularly maintained to avoid the necessity of operating at lower steam pressures to accommodate valves with a tendency to simmer or relieve prematurely.

A reduction in outlet pressure of 20 psi (1.4 bar) increases the specific fuel rate by 0.17 percent.

Stack Temperature Deviation— Although the temperature of flue gas leaving the h e a t - r e c o v e r y equipment cannot be adjusted directly during operation, the stackgas temperature is an important parameter to monitor in assessing thermal performance. In order to verify ship's instrumentation, it is useful to employ the same type of stack penetration for oxygen sampling for a periodic check of stack temperature. This test can be accomplished by inserting a ^-inch diameter by 24-inch long (6.4 mm by 610 mm) sheathed Chromel-Alumel thermocouple probe into the stack at a location sufficiently far from the economizer or regenerative air heater to assure a representative temperature reading.

In general, if feedwater temperature to an economizer, or air temperature to a regenerative air heater, is assumed to be at the design value, the temperature of the flue gas leaving the heatrecovery device will depend on the material condition of the heattransfer surface, or on the cleanliness of both the boiler and the heat-recovery surface. Thus, stack temperature can be considered to be an indicator of cleanliness or deterioration of material. It is not uncommon for stack temperatures to rise gradually 10°F to 15°F (6°C to 8°C) above the design value in the 12-hour period between scheduled soot blowing.

Conclusion—The steam powerplant operator is faced with dozens of routine maintenance tasks involved in assuring continuous availability of all the powerplant components. For the marine boiler in particular, a wide variety of activities are carried out on a regular schedule to ensure continuous operation and protect the material condition of components. These activities involve regular feedwater and boiler water analysis and treatment, sootblowing, cleaning of burner tips, periodic cleaning of firesides, adjustment of safety valves, and combustioncontrol system adjustment. While many boiler operating parameters are logged and reviewed regularly, it is felt that closely observing the four primary thermal parameters outlined in this paper will enable the plant manager to maintain the original fuel efficiency of the powerplant through many years of service.

Coupled with the necessity for monitoring thermal performance values is the need for simple, convenient methods for checking the ship's indicating devices. It is felt that knowledge of the true values of the important operating parameters described, combined with an insight into how much deviation in these parameters may affect the powerplant efficiency, will enable the operator to correct deviations in a cost-effective way. 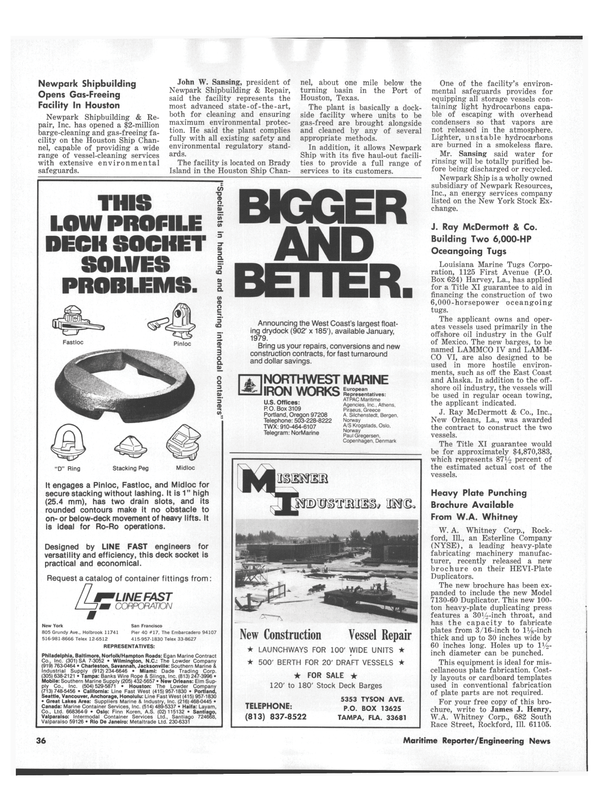