The SPA Provides A Means For The Shipowner To Keep His Vessel Performing In Accordance With Specifications In the design stage, a new ship is the embodiment of a set of c a r e f u l l y devised specifications.

Great amounts of labor and capital are expended to insure that the construction of the vessel meets these design requirements. The culmination of a successful building period is a sea trial demonstrating that the specifications have been met.

For purposes of the sea trial, considerable special instrumentation is installed at significant expense and then removed after its one-time use. Typical test equipment usually includes high accuracy Raydist for speed measurement, a test torsionmeter for shaft horsepower measurement, and a specially calibrated fuel-oil meter.

All of this equipment is employed in the c a r e f u l standardization runs during which the shipbuilder demonstrates and the owner confirms that the vessel's specifications of speed, horsepower and fuel consumption have been met.

These are the fundamental and principal parameters of the vessel's operating characteristics— at least as far as energy, or fuel consumption, is concerned.

Once a successful trial trip has been conducted, the stage is set for vessel delivery. Seldom are sea trials again run to determine that the vessel remains at its peak mechanical efficiency.

After delivery, deterioration in vessel performance begins. This deterioration occurs in three main areas: exterior hull condition, propeller condition, and powerplant performance. Depending on many factors, the deterioration of each of these items may be rapid or slow. In general, they will be independent of one another although they may occur simultaneously.

Most ships do not have equipment which will permit sufficiently accurate measurement to detect these changes in performance. For example, if you have only an inaccurate speed d e t e r m i n a t i o n , there is no rational basis for comparison of horsepower. It is un- common to find vessels fitted with h o r s e p o w e r meters. Virtually never are they found with speedmeasurement devices or fuel-oil meters of accuracy comparable to the equipment provided for a builder's trial.

It is less than rational for an operator to expect such accuracy from the shipbuilder and then never require similar accuracy from his own operating staff. The apparent reason has been cost.

Until now, means have not been available to make accurate measurements in an economic manner.

Ship Performance Anaylzer A ship performance analyzer (SPA) has been designed to automatically collect data which facilitates evaluation of these individual elements. The analyzer is a microprocessor-based data-analysis system whose product is ship speed, rpm, horsepower, thrust and fuel rate. Comparison of this fundamental data with previous similar data provides a continuing evaluation of vessel performance.

The SPA is a patented microprocessor which has become possible through the same technological advances that have made the modern calculators so commonplace.

The SPA permits rapid onboard calculations and the application of statistical techniques to the Loran readings for speed determination.

Concurrently, it provides means for the simultaneous collection and averaging over a very short period of time of a large number of observations of rpm, shp, fuel rate and thrust, providing values which are more accurate than can be obtained manually.

In connection with SPA development, considerable effort has been spent addressing questions pertaining to potential causes of d e c l i n i n g performance. For example, the analysis team has special portable instrumentation, independent of the shipboard SPA, which can be used to measure hull roughness on drydock.

Speed Measurement Since the 1950s, the authors' company has periodically applied statistics to Loran readings to measure speed to trial-trip accuracy.

Before the advent of modern microprocessor technology, large quantities of data were radioed to a shore-based computer, with consequent delays while waiting for a reply. These earlier procedures utilized Loran A and not the present Loran C, which is both more accurate and of far greater range (useful to within 1,200 miles from shore). The modern-day Loran C is quite different in principle and is not sensitive to time-of-day use, nor is it subject to attenuation caused by weather.

The SPA system imposes no restraints on vessel course with respect to Loran lines. The vessel may use the system without devia t i o n f r om its planned course.

This was not true in early use of Loran by Sun for speed determination.

In the earlier period, it was necessary to sail a p p r o x i - mately perpendicular to a set of Loran lines.

The average (counting the middle run twice) is speed through the water.

This means that the vessel must invest time beyond its voyage requirement for two extra Loran runs plus two 180-degree turns.

Each SPA run takes eight minutes and a turn about 15 minutes. Accordingly, an investment in extra voyage time of about 45 minutes must be made.

The coupling of a doppler speed log into the SPA system is under consideration. Although the accuracy of a doppler speed log is below that of the Loran C system currently used, it could be a useful alternative system. The authors recognize the value of the extra 45 minutes required for reciprocal runs for the speed. They e n v i s i o n a practical application where the ship's force might use the Loran C option only every three or four months, but use the doppler alternative on every voyage with absolutely no interference in voyage schedule or routine.

Shaft Horsepower Meter The Acurex horsepower meter has been selected as the standard instrument in the system to provide horsepower and rpm. This is a standard piece of equipment, light in weight and easy to install.

It has found increasing acceptance by the Navy and in merchant service.

It has been found advantageous to have shipyard engineers available to service this equipment independent of the manufacturer.

The same personnel are involved in maintenance of the other components of the SPA system. They are also responsible for the interpretation of data from the system with advice to the ship's force and owner.

Fuel Flow Measurement The p r e s e n t SPA f u e l f l o w measurement installations utilize a turbine meter specially installed in a valved by-pass line complete with a thermocouple. The particular turbine meter chosen is sized for full fuel flow. The results sampled by the SPA microprocessor are c o r r e c t e d automatically for density by means of the thermocouple and for viscosity by means of an API gravity typed into the SPA by the ship's force immediately before each use of the system.

A second fuel meter of an oval gear positive-displacement type is currently being investigated. The system is designed to permit this substitution. It would have the advantage of eliminating a nonlinear correction required for the turbine meter which is presently incorporated in the SPA.

Either of these fuel meters is installed in a full by-pass line adjacent to the regular coarse-calibrated ship's meter. To obtain long service life and continued high accuracy, the SPA fuel meter is only used when the SPA system is in use.

Thrust Measurement Thrust measurement is incorporated into the system by installing strain-gage load cells into each of the main forward thrust shoes and adding an integrating unit which sums the thrust from all shoes before passing this information to the SPA.

The r e a s o n f o r i n c l u s i o n of thrust measurement is that speed times thrust is basically effective horsepower (ehp). The ratio of ehp to shp is the propulsive coefficient for the ship, a parameter *Mr. Schorsch, vice president, and Mr.

of utmost importance to designers and operators of the ship. The propulsive coefficient is a true indication of the amount of delivered horsepower that is usefully applied to move the ship. The rest is lost energy.

Ehp is the horsepower required to overcome total resistance of a ship at a given speed. Since total r e s i s t a n c e is composed of frictional resistance, residual resistance and air resistance, which are all independent of the powerplant, an increase in ehp at constant speed indicates a change in either the hull or propeller condition. A hull deterioration would be indicated by a decrease in both ship speed and rpm at constant shp, whereas a propeller problem would cause speed to decrease and rpm to increase. An increased fuel rate at a constant shp is indicative of a powerplant degradation.

There is a further complication omitted here for simplicity which involves the difference between thrust obtained from the propeller as in an actual installation and thrust obtained in a model basin when measuring ehp. In the latter case, the thrust is tow-rope pull.

The actual use and interpretation of SPA information takes this complication into consideration.

Techniques of Use Present ship-performance evaluation is based primarily on observations made and recorded by the ship's engine-room crew. Unfortunately, the instruments from which these observations are taken were designed for plant operation and are not sufficiently sensitive to detect gradual deterioration in performance. The combination of inaccurate instruments and errors induced by the man making observations permits the present p e r f o r m a n c e - a n a l y s i s methods to detect only serious operational problems. Moreover, the broader question of total performance versus fuel consumption is masked in the large quantity of information recorded in a typical engine log.

The high accuracy and consistency of the Ship P e r f o r m - ance Analyzer will enable easy detection of gradual deterioration and can signal the need for more detailed inspection of the log book.

We believe regular use of the SPA system can detect performance deterioration earlier than it would otherwise be detected from the log book. This is because the SPA has greater accuracy and is simple to use.

Benefits The principal benefit from the SPA system lies in fuel savings achieved through better knowledge of the true condition of hull condition, propeller condition and powerplant performance, all relative to the vessel's original design, or fresh from drydock condition.

Discipline introduced into performance monitoring by a simple system, shipmate to the ship's force, leads to heightened interest and understanding of vessel performance with ultimately lower fuel costs. The system can be used by the chief engineer to regularly compare shp and fuel consumption even without regard to ship speed. The master and chief can determine increased fuel costs as a result of increasing hull roughness.

We believe that on one vessel studied, an increase of one mil in hull roughness represented an incremental fuel cost of $120,000 for the year. In 13 months of service, this p a r t i c u l a r vessel increased in hull roughness by about four to five mils, which at the time it went into drydocking represented an increase in fuel costs of $365,000 per year. Alternatively, that loss could be viewed as a speed loss of 0.7 knots.

In one of the early applications in the Alaska service, the system indicated a significant speed loss due to hull roughness. Inspection by underwater divers with videotape revealed an extent of grass growth not expected in the Alaskan service. Grass growth was thick enough in one area to have actually trapped a fish. 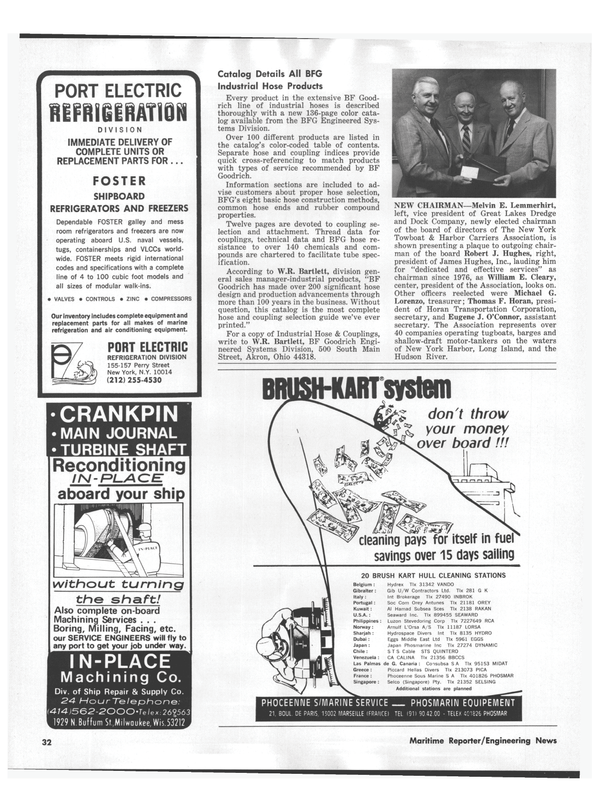