The second and third in a series of seven T-ATF Fleet Ocean Tugs built by Marinette Marine Corporation, Marinette, Wis., for the U.S. Navy were recently christened.

The USNS Narragansett (T-ATF 167) recently completed sea trials and has been delivered.

The USNS Catawba (T-ATF 168) is completing sea trials and will be delivered in the spring of 1980.

Power is transmitted through line shafts and propeller shafts to controllable, reversible-pitch propellers running in Kort nozzles. Total installed horsepower of 7,200-bhp is designed to produce a minimum b o l l a r d pull of 120,000 pounds and a free-running speed of 15 knots at 80 percent power.

The T-ATF is designed to operate with a full-time crew of 20 men. Accommodations for the permanent crew are above the main deck and are, in general, comparable to commercial standards for the type of vessel. Besides quarters for the normal crew, troop-type berthing accommodations are provided below the main deck for an additional crew of 20 transients, if the mission requires it.

To support its primary tasks, the T-ATF is fitted with all of the permanent equipment that is required. This includes a single drum wire towing winch and synthetic rope traction machine. A stern roller is provided at the transom for over-the-stern operations such as anchor handling and recovery, and diving support.

A portable towing bow is installed to provide an uninterrupted sweep of the towline over the bulwarks.

Hydraulically operated Norman Pins are provided to prevent the towline from moving too close to amidship.

An electrohydraulie-powered deck crane is located on the fo'c'sle deck starboard side for use in handling portable equipment and r e c o v e r i n g salvage gear. The crane requires only one man for operations. The ability to rotate the boom without vangs and the self-stowing capability of the retracting boom represent a significant improvement over the king post and boom arrangement of the older ATF.

In a d d i t i o n to the vessel's mooring anchors, a 9,000-pound Stato anchor is installed in the forward bulwark opening. This anchor is used for debeaching and salvage o p e r a t i o n s . The ship's crane is used to recover the anchor and place it on the main deck. The anchor is stowed using shoreside facilities.

An area of the main deck is marked for receiving cargo from a helicopter. Helicopter operations do not require special equipment and do not interfere with the primary mission of the vessel.

The T-ATF's primary mission is to salvage and take in tow ships of the Fleet that are battle damaged or nonoperational. The combination of the conventional wire tow and traction machine for synthetic hawsers offers the greatest possible simplicity and the highest degree of reliability.

The T-ATFs are equipped to respond quickly to a call from a ship in danger without having to first return to port.

The vessel is also capable of performing offshore firefighting and d e w a t e r i n g of distressed ships. Two 1,500-gpm foam monitors are located on the wheelhouse top and the firefighting platform b e t w e e n the stacks.

Each fire pump supplies a monitor and a hose manifold on the main deck. Dewatering of stranded vessels is accomplished with portable eductors connected to the firefighting hose manifolds.

In addition to these capabilities, the T-ATFs will be used for a variety of other missions. The ships have space and weight reservations for p o r t a b l e s a l v a ge equipment, including pumps, generators, beach gear and a hydraulic puller. The open deck area permits untethered diving with the use of portable equipment.

The tugs can also be used for transporting and deploying a payload of oil-spill cleanup equipment. 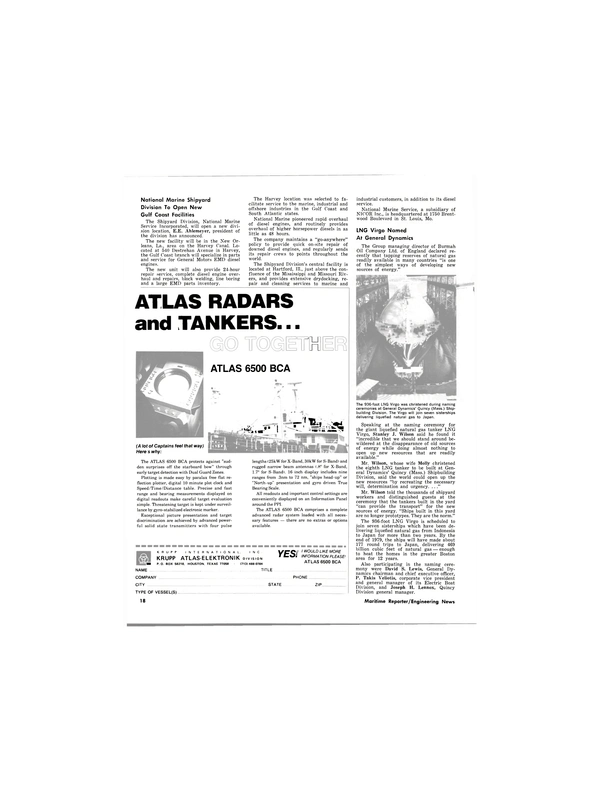