The following is a condensation of a technical study prepared by the engineering and research departments of Samson Ocean Systems, Inc., Shirley, Mass. The report analyzes and compares the performance characteristics of the traditional towing surge pendant utilizing heavy chain with those of a nylon rope pendant.

Traditionally, a surge chain has been used consisting of one or two shots of very heavy chain.

The chain catenary provides the necessary energy storage with the penalty of increased weight and towing resistance and greatly increased catenary depth at low speeds. It is desirable to replace the surge chain with a pendant of nylon rope. This offers the required energy storage because of n y l o n ' s e l a s t i c i t y without the weight of the chain.

The performance of a tow in a seaway requires the continuous transfer of energy between the vessels involved. Any difference in speed between the tug and tow (during start-up or under wave impact) means the tug must accelerate the tow or be slowed down by it. If the energy necessary to accomplish acceleration or deceleration must be transmitted instantaneously, as it would through a rigid link, it would result in enormous loads on the deck fittings. It is, therefore, essential for a towing hawser system to store energy f r om one vessel and transfer it gradually to the other without excessive loads.

Nylon rope offers this energy storage capacity with less length than wire or chain catenaries with the resulting advantages of improved control, reduced weight, little or no catenary, and reduced towing resistance. Improved control results f r o m the r e d u c ed length or scope of the hawser which provides a greater angle of the hawser at the tow, or turning moment, for the same sideways motion of the tug.

The use of a surge pendant with a wire rope hawser offers the advantages of utilizing existing towing equipment and locating the synthetic rope outboard of both the tug and tow, thus minimizing abrasion. The basic procedure is to connect one end of the pendant to the bridle on the tow and the other end to the tow wire. When entering or leaving harbor, the tow wire is paid out just enough to clear the tug bulwark. This puts the tow on a short scope for better control.

Once at sea, the tow wire can be paid out until the tug and tow are in step (i.e., riding up and down the waves together). If the selection procedure o u t l i n e d in the complete Samson study has been used, there is no need to pay out wire for a catenary. The surge pendant has all the energy storage capacity required by the tow. This allows the tow hawser to be kept near or even above the water surface, and thus reduces the resistance of the tow. The reduced resistance can result in either higher speeds or reduced fuel consumption.

Copies of the complete study are available at no cost from Samson, and contain full instructions and graphs describing the methods for determining the most cost-effective surge pendant systems for various types of tows. 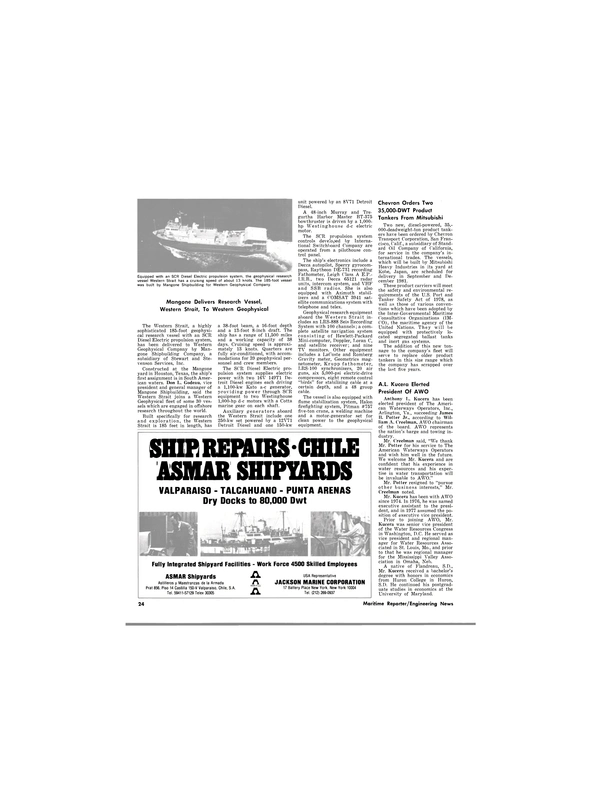