The Northern Leader, the third in a new series of 123-foot combination boats constructed by Marine Construction & Design Co.

(MARCO), Seattle, Wash., was delivered recently. It is reported to be one of the most versatile fishing vessels for the North Pacific yet constructed by MARCO.

Owners of the new vessel are Tom and Colleen Peterson, experienced participants in the fishing industry, and Russell Ott, veteran fisherman of several North Pacific fisheries. They also own another crabber, the 120-foot Ocean Leader. Mr. Ott will skipper the Northern Leader.

It is the first to be equipped by MARCO for dry refrigerated holds as well as for chilled seawater and circulating seawater.

The all-steel vessel is equipped to work all phases of crab fishing, bottom fish trawling, and freezing.

It will also operate as a tender, packer, and processor for herring and salmon.

With its 9-foot stern ramp and installed prepiping, the Northern Leader can be easily converted to trawling.

These three holds, plus a fourth hold in the lazarette area, can be used to carry dry frozen product with 9,300 cubic feet of capacity.

The hydraulic deck machinery for crabbing includes a MARCO KingHauler for hauling crab pots, a KingCoiler for line coiling, a double action crab pot dumping rack, and a bait chopper.

A MARCO U880 Capsulpump fish pump will be used during packing operations.

The main engine is a Caterpillar D399 t u r b o c h a r g e d and after-cooled diesel that develops 1,125 bhp and is coupled to a C a t e r p i l l a r 7271 hydraulic reverse reduction gear. The vessel has a Coolidge 90-inch four-bladed stainless-steel propeller.

Auxiliary power is provided by two Caterpillar D3408 TA diesel engines, each coupled to a 250-kw g e n e r a t o r set. The Northern Leader, unlike other vessels in the series, has a 440-volt electrical system for the refrigeration system. There is also a Caterpillar D3304 T auxiliary engine with a 90-kw generator.

A major change in the series design has been the enlarging of the engine room to accommodate the r e f r i g e r a t i o n system. This was accomplished by moving the after engine room bulkhead between the wing tanks 5 feet aft.

The layout and decoration of the interior was designed by Mrs.

Mr. Ott, skipper and part owner of the Northern Leader, has designed a completely new master control console that provides a panoramic view of all electronics.

The console is at a 60-degree angle, and the electronics are recessed in the console so that the pilot can conveniently monitor all navigation and fishing operations.

The Northern Leader is the ninth fishing vessel for the North Pacific fisheries MARCO has delivered this year. The previously delivered 123-foot boats were the Sea Wolf and Arctic Wind, both completed this past summer. 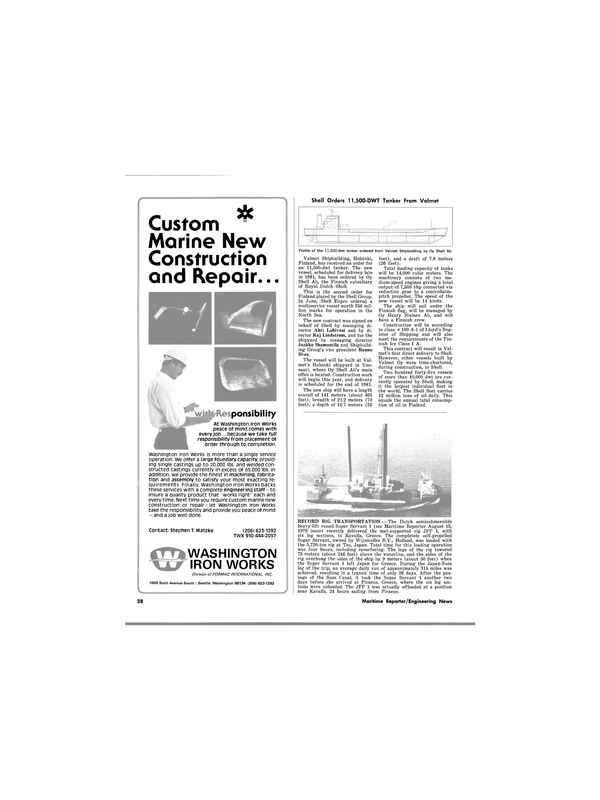