A contract to construct six icebreaking, m u l t i - p u r p o s e cargo vessels of 20,000 dwt has been signed by Wartsila's Turku Shipyard and V /O Sudoimport of the U.S.S.R. Designed in cooperation with the Soviet Ministry of Shipping, their future operator, the ships will be capable of operating independently in difficult Arctic ice conditions.

The value of the order exceeds one billion Finnish marks (about $278 million) and is the biggest ever received by a single Finnish industrial enterprise. This latest contract increases Wartsila's total orderbook to almost 5.5 billion marks ($1.5 billion), and books the capacity of the Turku and Helsinki shipyards for the next three years.

Each ship will be powered by two Wartsila/Sulzer 14 ZV 40/48 diesels providing a total output per ship of 21,000 bhp (15,400 kw) and an open-water speed of 17 knots. The engines will drive a controllable-pitch propeller through reduction gears and hydraulic coupling; the latter reduces ice shocks to protect the machinery.

Five Wartsila/Vasa 524TS diesels will be installed in each ship as auxiliaries. Most of the navigation equipment will be of Soviet manufacture.

The Arctic conditions in which these vessels will operate require many special considerations. The hull will be fabricated of coldresistant steel, and the winches, cargo hatches, and hydraulic systems will be specially constructed to withstand the severe environment.

Both the engine room and deck house are located aft. The ship has individual cabins for the crew of 39, two cabins for pilots, and six double passenger cabins. Crew amenities include a gymnasium, swimming pool, sauna, movie theater, photographic laboratory, library, and hobby room. The ship also has a passenger saloon.

The ships have two decks, five cargo holds, and forecastle. On the 'tweendeck, rolling cargoes can be loaded and unloaded through the stern port.

The multi-purpose vessels are designed for operation in the Soviet Arctic areas. They can be used for transporting general cargoes, rolling cargoes, containers, grain, coal, or ore. In the development of the hull lines, special experiments were carried out in the ice-breaking laboratory at Wartsila's Helsinki shipyard. To reduce ice resistance, the ships will be fitted with air-bubbling systems developed and patented by Wartsila.

The ships will be built to the highest Ice Class of the U.S.S.R.

Register of Shipping. They will also meet the latest international requirements for safety and environmental protection, as well as Soviet sanitary requirements. 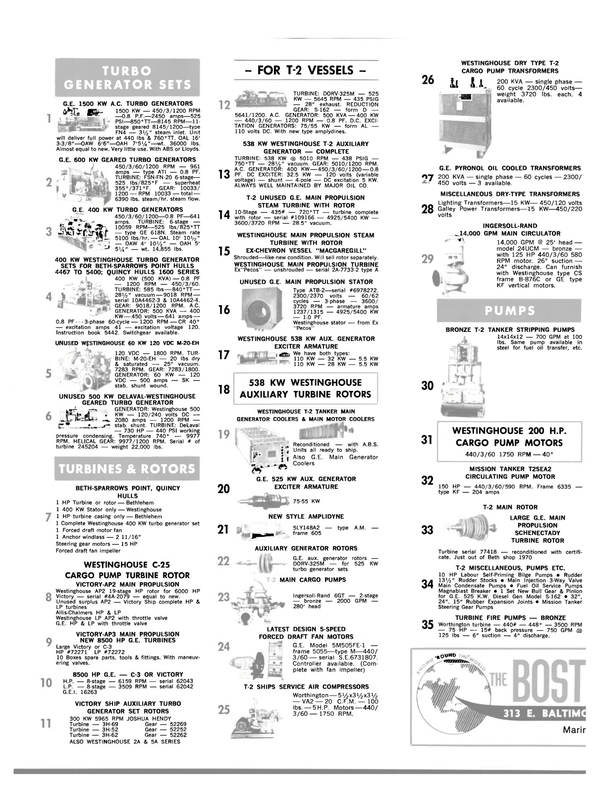