The first vessel extruded from Cammell Laird Shipbuilders' covered construction hall —one of the biggest of its kind in the U.K.— is a Type 42 guided-missile destroyer for the Royal Navy. This operation took place when the destroyer, which is to be named HMS Liverpool, was moved with the aid of hydraulic rams at 20 centimeters (7.8 inches) per minute a distance of 115 meters (337.3 feet) down the slipway. It is the largest and most intricate shipbuilding operation ever carried out in the yard, which is part of the state-owned British Shipbuilders.

Cammell Laird's building hall came into operation in 1978, when HRH Princess Anne laid the destroyer's keel, and the vessel's extrusion f r om the hall on to a conventional outside slipway from which she will be launched in September marked another maj o r development in shipbuilding at Birkenhead.

A new building method and extrusion process developed by the company has been used in the production of this highly sophisticated vessel, and it has created considerable interest among naval shipbuilders worldwide.

"These new methods," said Tony Smith, chairman and chief executive of Cammell Laird, "have demonstrated that our advanced shipbuilding plant and technology, although primarily designed for merchant ship construction, lends itself remarkably well to the building of warships, and this, together with the expertise of our workforce, have produced a vessel consistent with the Royal Navy's quality requirements." The building method is a departure from the traditional sequence of building the hull structure first, followed by machinery installation and outfitting. The method is a combination of the "extrusion" process and the "open-boat" principle. Advantage can be taken of the excellent conditions within the hall — those of good lighting, ventilation, access, cranage, and cleanliness.

With the "open-boat" technique, decks over the machinery space are left off, providing ideal access for installing major items of equipment such as gearboxes, turbines, etc., in an environment totally free f r om the effect of weather. Work also proceeds in parallel elsewhere under cover on fabrication and outfitting the multiple-deck "sandwich" structures located above t h e m a c h i n e r y, which support the "open-boat" method and enable work to be undertaken in both areas simultaneously. 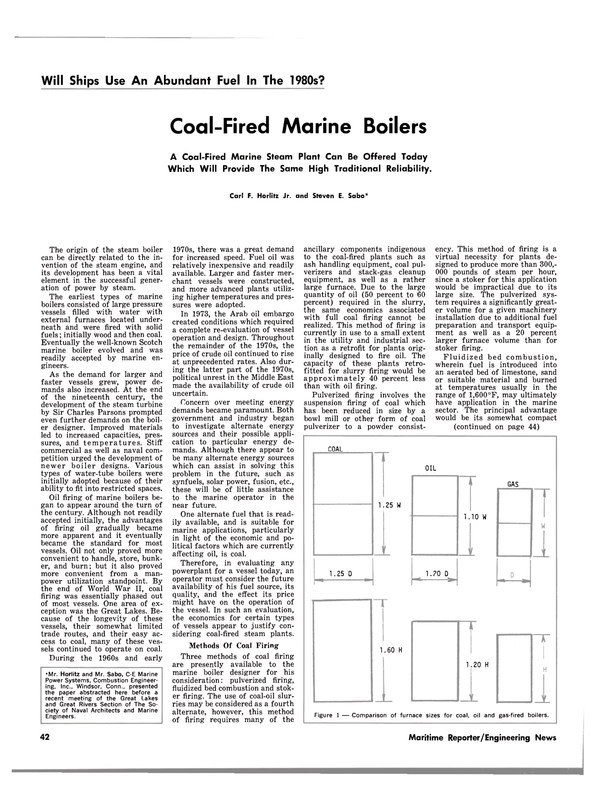