(HUDSHIP), Pascagoula, Miss., marked its entry into the foreign market with the delivery of the 112-foot offshore supply vessel Grayscout to Gray MacKenzie Company, Ltd., Marine Division, Bahrain. The vessel departed from Pascagoula recently to join the already sizeable fleet now operated by Gray MacKenzie in the Arabian Gulf.

The design is HUDSHIP's standard 112-foot utility vessel hull, with some minor modifications to the owner's particular requirements.

The house arrangement has been redesigned to accommodate 17 men in six cabins.

Harold Eckmann Named Member Of Board For Todd Shipyards Corp.

Harold A. Eckmann was elected to the board of directors of Todd Shipyards Corporation at the recent annual meeting in New York, John T. Gilbride, chairman and chief executive officer, announced.

Francis Hospital, and a trustee of the Greenwich Savings Bank, the Insurance Institute of America, and the Insurance Company-Supported Organizations Pension Trust.

In commenting on the election, Mr. Gilbride said: "We know our shareholders will share with us in our great fortune in having a proven executive in the insurance field, such as Mr. Eckmann, join our board. His knowledge of national and international business will be of inestimable value to the corporation.

The after deck, unchanged by the redesign, has a Scott ATO 7y2- ton crane mounted at the center line to service the entire cargo deck, which is 60 feet long and 20 feet wide. To each side of the crane are Hydradyne hydraulic winches, giving the vessel a fourpoint mooring capability.

Among the special features of the Grayscout are built-in oil spill control disbursement tanks, firefighting capabilities, and a drill water supply system.

The pilothouse was arranged for maximum all-around visibility.

The vessel and all its systems are built and tested to American Bureau of Shipping Rules; she is classed A-l All Ocean Service.

A sister vessel of the Grayscout, the Graysearch, is scheduled for delivery in August this year. 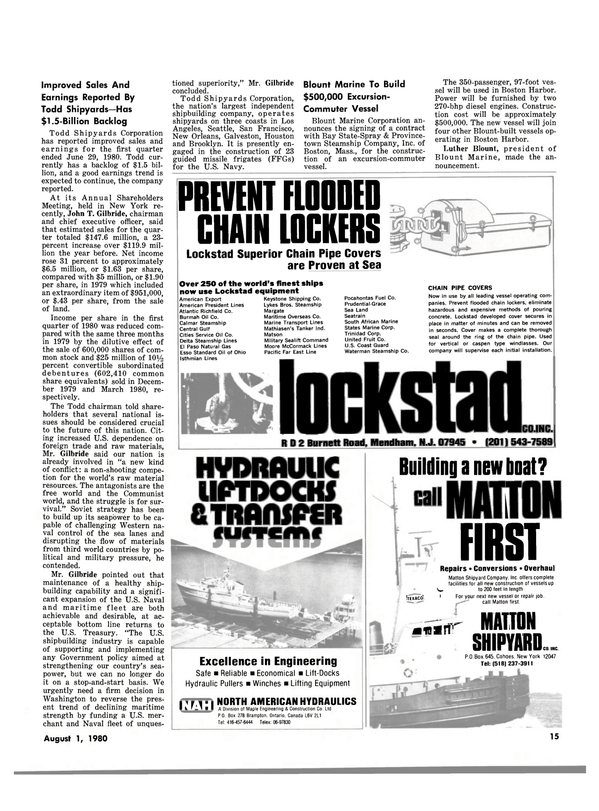