Aalborg Vaerft A/S has begun the tank tests of an eight-meter-long model of the new passenger "superliner" it will build for Carnival Cruise Lines of Miami, Fla.

Studies being conducted at the Danish Ship Technical Laboratory in Copenhagen are designed to ensure optimal propulsion conditions and maneuverability of the 45,000-gt, 1,800 passenger vessel currently designated as hull No. 246.

Similar tests contributed to the operational excellence of Carnival's M/S Tropicale, delivered to the Cruise Line by Aalborg Vaerft in December 1981. The tests also demonstrated the functionalism of the new, uniquely designed funnel which has become Tropicale's most recognizable mark.

Specifications for the new liner, drawn in cooperation among the yard, the shipowner, technical consultants Technical Marine Planning (Group) Ltd. of London, and designers Farcus & Farcus of Miami, include: length overall 220 meters, width 28 meters, and a 7.5-meter draft.

To be built completely of steel, hull No.

246 will be equipped with two propellers and four 1,000-hp thrusters (two forward and two aft). The latter will combine with two rudders to ensure a maneuverability that will permit access to almost any harbor and port.

Models also are being built of the 725 passenger cabins, each of which will have private bath facilities and shower. All will be equipped with color television.

Propulsion machinery will consist of two Sulzer, two-stroke, diesel engines, type 7RLB66, each having an output of 15,200 bhp, producing 21.75 knots. The main engines will be coupled to two controllablepitch KaMeWa propellers, and a shaft alternator of 3,000 kw will be driven by each engine so that the total electrical power supply at sea can be delivered by the main engines.

Three diesel alternator sets will be installed as well.

The new ship will be totally automated, with central surveillance of all vital systems.

Among the safety and security factors that will be built into every aspect of design is a sprinkler system throughout both public and operational areas.

Communication equipment, including electronic navigation, will be state of the art when the ship is delivered to Aalborg Vaerft in mid-1985. 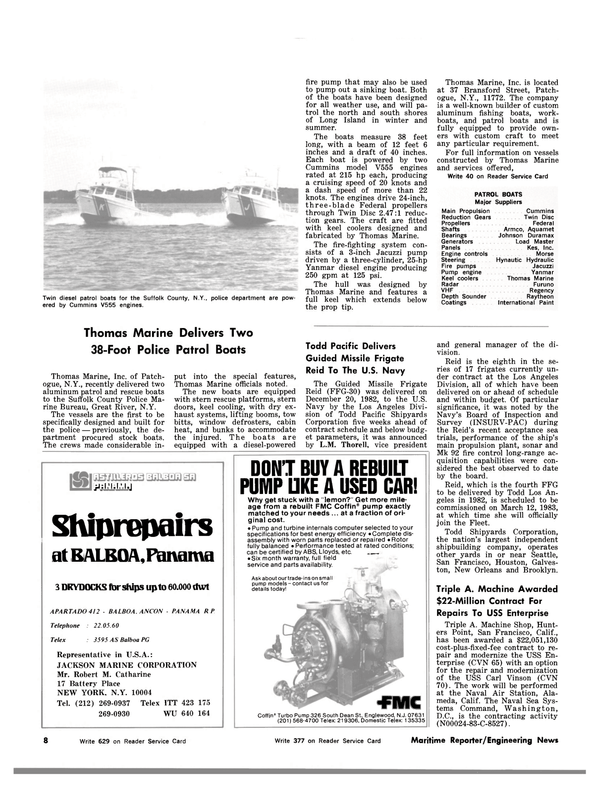