MacGregor To Equip 30 Barges, 3 Ships Building In Japan For Paraguay

MacGregor Far East (MGFE), the Tokyo-based member of the MacGregor International organization, has received orders to supply cargo access equipment for 33 vessels to be built for Paraguay. Thirty are dry cargo barges to be delivered by Mitsui Engineering & Shipbuilding in knocked down form for assembly in Paraguay. The remaining three are general cargo ships to be built in Japan by subsidiary/ affiliate companies of IHI and Mitsui.

Land-locked Paraguay is dependent dependent on barge traffic for its commerce. Access to the sea is near Buenos Aires, Argentina, via the Parana and Uruguay Rivers on which the new barges will carry grain, soya bean, cement, and other bulk cargoes.

All the vessels — barges and cargo ships -— are part of a package negotiated by Japanese trading houses for Paraguay's stateowned Flotta Mercante del Estado of Asuncion. Deliveries of the barge components will start soon, while delivery of the cargo ships is due in 1983.

The barges are of two capacities — twenty 360 dwt, and ten 800 dwt. Both are of similar design.

The hatch covers to be supplied by MGFE for each design are, apart from size, identical.

They are of the telescopic type each one comprising two, threeelement sets, the cross joint of each set meeting at the center of the division between the two holds.

The coaming extends beyond the fore and aft ends of each hatch, a feature which in stowage, enables the sets to be telescoped clear of the end coamings, providing a 100 percent clear opening of each hatch.

One 6,000-dwt general cargo ship, to be built at Ishikawajima Ship & Chemical Plant, is geared 'tweendecker with three holds sized to carry containers both within and on top of the hatches.

The pontoon covers will be handled by the ship's 15- and 25- ton derricks.

Two smaller general cargo ships are to be built at the Mitsui affiliate Kanrei Shipbuilding of Tokushima. They are geared, single-decked, two-hold vessels of 1,500 dwt. MGFE will supply wire operated single-pull hatch covers. 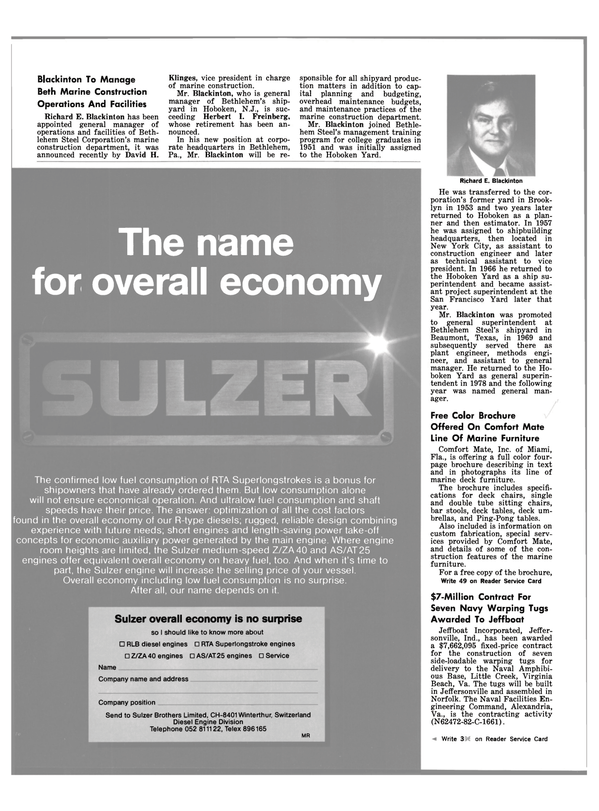