Burton Shipyard, Inc. of Port Arthur, Texas, recently delivered the 224-foot tuna vessel Lady Marion. The steel-hulled tuna purse seiner is the sixth of a seven-vessel contract awarded to Burton by Van Camp Sea Food Co., a division of Ralston Purina Co. The purse seiner will operate primarily with the Pacific fleet, docked in San Diego, Calif., and will fish for skipjack and yellowfin tuna.

The Lady Marion measures 42 feet wide, with an 18-foot draft, and cruises at 16 knots. The vessel is designed to operate with a crew of 21, and is capable of carrying a 1,200-short-ton payload of frozen tuna.

The vessel will travel through the Panama Canal to San Diego, fishing the eastern Pacific waters after being introduced to the San Diego tuna fishing community.

The new tuna seiner is propelled by a turbocharged EMD marine diesel engine developing 3,600 shp at 900 rpm. The 20- cy'iinder engine drives a 132-inchdiameter, f i v e - b l a d e stainlesssteel propeller, built by Avondale, through a Falk 5.033 :i reduction reversing gear. Shaft speed development is rated at 179 rpm.

A passive stabilizer has been incorporated into the hull structure and was engineered by John J. McMuIlen Associates. Fishing gear and hydraulic equipment are by Marco and include a model WS444 pur.se seine winch and the Puretic power block model B56-61990-185. A Whaley model B-102-K hydraulic ring stripper is also provided.

The ammonia systems utilize Vilter components which were subcontracted by Refrigeration Systems of New Orleans, La.

A helicopter rides on the pad located on the wheelhouse top.

A private stateroom is provided for the pilot and his mechanic, who also have a workroom on the boat deck.

Five outboard chase boats are stored on both the boat deck and the upper deck. The diesel-powered skiffs were purchased from Mauricio & Sons of San Diego.

The vessel is equipped to stay at sea for as long as three months before bringing her payload of tuna back to San Diego.

Burton expects delivery of the seventh tuna vessel, the Judith Carol, to be in early 1983. The purse seiner was designed by Rados International of San Pedro. 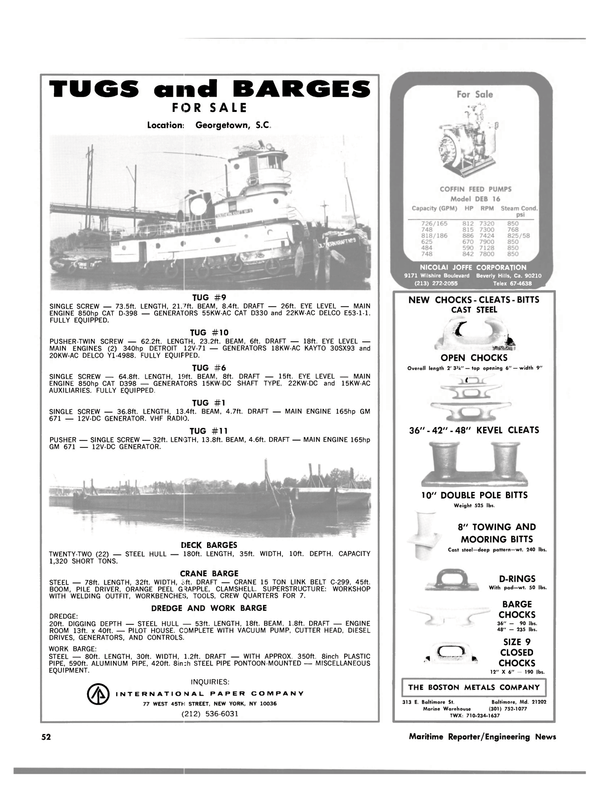