Energy Transportation Corporation of New York City has taken delivery of a tug and 420- foot notched-stern barge for the transportation of liquefied ammonia in the Gulf Coast area.

The tug/barge will be operated by Energy Ammonia Transportation Corporation, a subsidiary, under long-term time charter to International Minerals & Chemical Corporation.

The barge Energy Ammonia was constructed in two phases.

The steel structure and deck machinery were built at the Modec Louisiana Shipyard in LaRose, La., in 1981. It was then towed up the Mississippi to Memphis, Tenn., where the trunk deck was removed, cargo tanks constructed, insulated, and installed, and a cargo-handling system installed by Chicago Bridge & Iron Company.

The cargo system was tested following a tow down the Mississippi to the Baton Rouge area where the barge met the tug Energy Altair and loaded its first cargo of ammonia for delivery to the International Minerals & Chemical Corporation terminal in Tampa, Fla. It is unmanned and the cargo liquefaction system is designed for fully automatic operation.

The tug Energy Altair was built by Bollinger Machine Shop and Shipyard, Lockport, La. Its principal c h a r a c t e r i s t i c s are: length, 120 feet; beam, 37 feet; and depth, 18 feet. The tug is equipped to push when set in the deep notch of the barge or tow on a hawser.

Both pilothouses are equipped with a gyrocompass, radar, Loran C, VHF radio, depth sounders, searchlights, and in addition the lower pilothouse has a satellite navigation unit and a singlesideband radio.

There are two 99-kw, 230-V, 3-phase generators driven by 8Y- 71 Detroit Diesel engines. Each unit is capable of supplying all power requirements for the auxiliary equipment and house electrical loads.

Deck equipment consists of a 160,000-pound line pull towing winch driven by a 6V-71 Detroit Diesel equipped with 2,400 feet of 2-inch wire rope and an auxiliary drum; a 1,000-pound stockless anchor and anchor windlass; and a deck capstan on the aft deck for handling tow gear. The bilge/ballast and fire systems piping are all interconnected with a Barnes 25ICU-1 pump servicing each system. Separate manifolds for the bilge system and ballast system are located in the engine room. Five fire stations are located two in the engine room; one main deck (port side) ; one fo'c'sle deck (stbd. side) ; and one upper deck (port side). Each fire station has 50 feet of hose and a combination stream/fog nozzle. 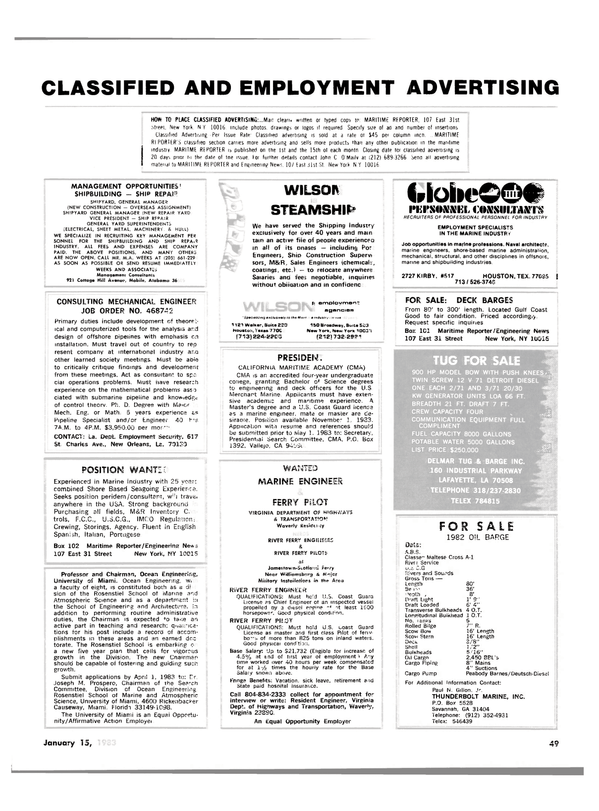