It is the first ASNE meeting of this type to be held on the West Coast. The top-flight program, entitled "Putting Fire Power to Sea," is part of ASNE's continuing series of meetings, the purpose of which is to achieve stronger professional identification with combat system engineering —- a cardinal element of naval engineering.

Since 1978 ASNE has organized a series of meetings, seminars, and conferences on topics relating to combat systems which have provided a thoroughly professional forum for leaders and managers from the government and private industry to share concepts and ideas on mat fee i .< of mutual concern.

Navy, U.S. Coast Guard, and from the private marine sector.

The meeting will be held at the Needham Theatre located at the U.S. Naval Construction Battalion Center in Port Hueneme.

The formal proceedings will begin at 9 a.m. with an introduction and welcoming remarks by both chairman Otth and Richard C. Fay, president of ASNE.

The keynote address, entitled "Current Views on Surface Warfare Combat Systems," will be given by Vice Adm. Robert L.

A reception will be held, starting at 6:30 p.m. in the Santa Rosa Room of the Casa Sirena Marina Hotel, following the technical sessions.

The ASNE Sections in southern California also have arranged for a bus trip to Solvang, a Danish community, and to a winery for guests of those attending the ASNE meeting. The bus will pick up participants at the Casa Sirena Marina Hotel and at the Oxnard Hilton Inn for the day tour. The charge for the tour, which will return in ample time for the reception, is $12 per person.

Rooms have been reserved for conference registrants at the two hotels.

The technical sessions are classified "Confidential," and the necessary clearance must be secured prior to attendance.

Cost of the meeting is $40 for ASNE members and $65 for nonmembers. 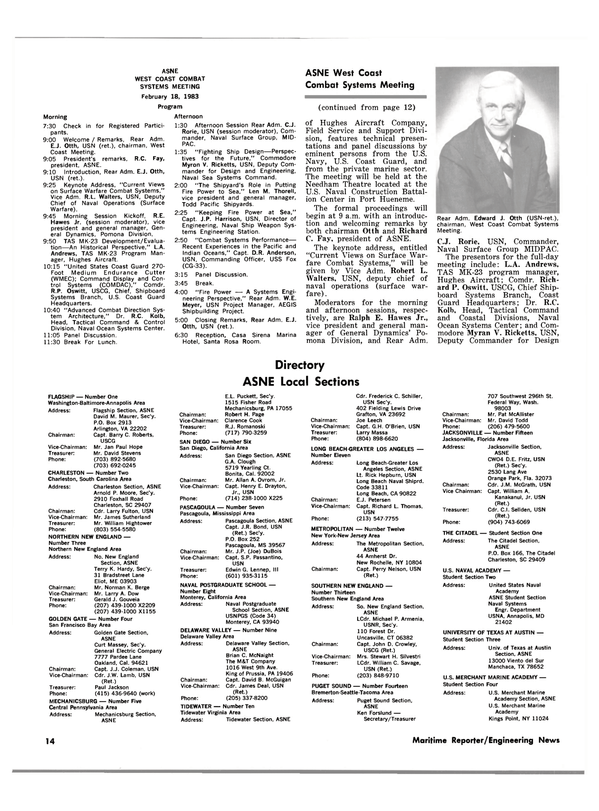