The other new design — a function- formed pier—was developed under contract with Sidney M.

The task is part of the Naval Facilities Systems Project, guided by a Navy decision "to acquire, operate and maintain piers which are cost effective and responsive to changing user (new ships') requirements." Duane Davis, NCEL project engineer, said the first steps taken were to identify ship requirements; to analyze current deficiencies and problem areas; and to develop design criteria.

Both NCEL pier proposals incorporate the shore services that will meet the requirements of Navy ships through the 1990s.

The laboratory favors the floating pier concept—it is judged to have many advantages over any pile-supported concept.

It can be constructed of two 600- foot modules at an offsite construction yard, and then floated into place. The main, upper deck stands 20 feet above the water line. It contains cargo stairwells, electrical service outlets, and trash wells, and also provides the clear deck required by the Navy.

Mr. Davis cited the following advantages of a floating pier: • On-site construction time is reduced because only 58 anchoring piles are driven, while a conventional pile-supported pier requires hundreds of piles. As the pier modules are constructed offsite and floated into place, significant time is saved. Replacing a fixed pier with another fixed pier requires at least 18 months, but out-of-service time could be decreased by 12 months if a floating pier were installed.

• Since the pier rises and falls with the tide, its elevation remains constant. Restraining lines do not require constant tending and utility lines can be shorter.

• A modern fender system contacts the ship at the waterline and remains constantly in position because the pier and the ship move together with the tide.

• A floating pier is an ideal concept for two-deck configuration.

• The design is adaptable to a wide range of site conditions. For typical sites, guide/restraining piles are located along the pier centerline. For sites with atypical conditions, other types of mooring/restraining systems can be used.

• The pier modules can be towed to a new site and reinstalled if the need justifies the expense. Prior to relocation, the guide piles are removed, the ramps and utility lines disconnected.

• The design offers significantly better protection from earthquakes than a fixed pier.

The laboratory's new pier concepts were influenced by recommendations emanating from a 1981 Navy workshop on "Pier Designs for Fleets of the 1990s and Beyond." The NAVFAC/ NCEL study group reviewed and evaluated a cross-section of fleet requirements, problems, priorities, and proposals. The workshop structured definitive guidance for NCEL in its designs.

Mr. Davis said plans call for the laboratory to conduct costbenefit studies of the floating pier concept to demonstrate its economic feasibility and operational advantages. A second workshop, scheduled for next summer, will review and critique pier designs generated by NCEL and NAVFAC field divisions. 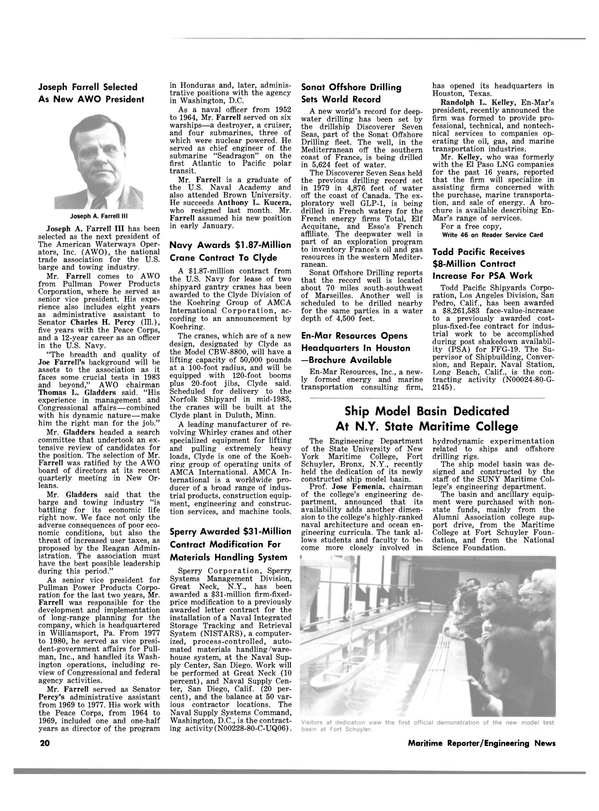