The Harvey Quick Repair Division of Avondale Shipyards, Inc. in Harvey, La., recently completed an extensive overhaul and re-engining of the 121-foot oceangoing tug Harvey Trojan (photo). Originally delivered by Halter Marine in 1974 as the Abdon Martin, the vessel is now owned by Harvey Gulf International.

Prior to the refurbishing, the tug had been in lay-up for approximately two years. She is the 13th vessel in the Harvey Gulf fleet.

A major part of the conversion was the replacement of the two original engines with twin Stork-Werkspoor 6SW280 diesels driving fourbladed, stainless steel propellers in Kort nozzles via Reintjes WV3400 reduction gears with a ratio of 5.053:1. The gears were supplied by Karl Senner, Inc. of New Orleans when the tug was built. The overhauled engine controls were supplied by WABCO, and the steering system by Sperrv/Vickers.

The entire hull and all decks were blasted and painted, inside and out, the stern roller was overhauled, and the bow fenders were replaced. For heavy-duty towing jobs in the Gulf or worldwide, the tug is fitted with an Intercon 225, double-drum towing winch will a bollard pull of 280,000 pounds. Other deck equipment includes an HBL anchor windlass, Carlisle & Finch searchlights, and Kahlenberg air horn. Fuel oil capacity is 120,000 gallons and potable water 15,000 gallons.

In addition to the new main engines, the Trojan has two 100-kw generators driven by Detroit Diesel 8V-71 engines. These units were supplied by George Engine Company of Harvey. 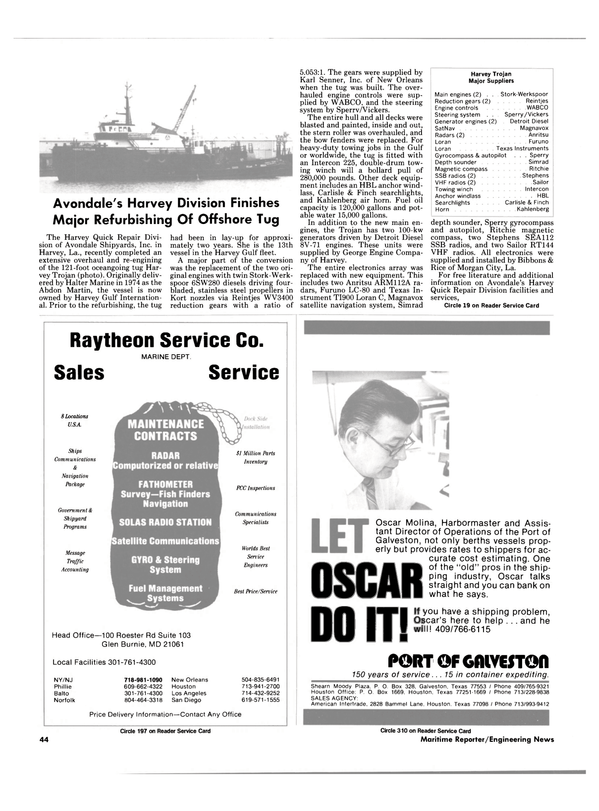