CGCO's high-performance marine facility, Plant III, is utilized to manufacture and test these types of products.

Weighing 23 tons, the surfacehardened bull gear is the largest designed and manufactured in the free world. The T-AO back-to-back test stand is the seventh and largest facility of this kind that Cincinnati Gear has designed, built and operated.

CGCO is the first U.S. company to offer back-to-back testing in this size range.

The full-load, back-to-back test arrangement had the port and starboard units mounted with the input and the output shaft flanges facing each other and connected with appropriate couplings. The input coupling system incorporated a torque meter in the input quill shaft isolation system to monitor applied torque. The output flanges supported, and were connected by, a large custom-designed hydraulic torque applier.

The "load loop" was accelerated to speed by a 1,000-hp variable speed motor driving the PTO shaft flange of the port unit. This motor was sized to overcome gear mesh and journal bearing power losses.

With these key elements in place, virtually any power/speed combination within the design envelope could be simulated. The tests have established basic performance parameters while the units were subjected to a closely simulated shipboard operating environment in terms of torque, speed and mounting arrangements.

The hydraulic load cell in this test stand in capable of applying loads in excess of 13,000,000 lb.in. torque and 25,000 horsepower. For the TAO test the unit operated for 25 hours at 100 percent of rated power and speed—16,272 hp at 95 rpm with 900,000 lb.ft. of torque. To demonstrate adequate design margins, the unit was operated at 115 percent of rated power. This backto- back full-load test confirmed that the units meet given specifications at rated power and speed.

Full face contact of the main pinion/ bull gear mesh was verified by dynamic strain gage measurements of a series of bull gear teeth while the test unit ran at rated power and speed. Comparison of variations in peak strain gage measurements of the bull gear teeth verified the accuracy and correctness of the input pinion/bull gear longitudinal and profile corrections. These measurements confirmed that blueprintspecified tooth corrections are adequate to insure a uniform load distribution and allow evaluation relative to current ABS gearing derating factors.

The thrust collar concept demonstrated and proved the effectiveness of canceling the axial force directly at the single helical gear mesh.

A post teardown inspection at the conclusion of the test program on both the starboard and port units provided engineering/quality assurance data of all gears, bearings, and thrust cones. The units were subsequently reassembled to production configuration, packaged, and shipped.

To the military there are obvious benefits of carburized, hardened and precision ground (CHG) marine gears for applications which are sensitive to noise generation and/or detection.

Currently there is a growing interest in CHG gears from engineers with commercial marine and other industrial applications looking for ways to better utilize space in a cost effective package. 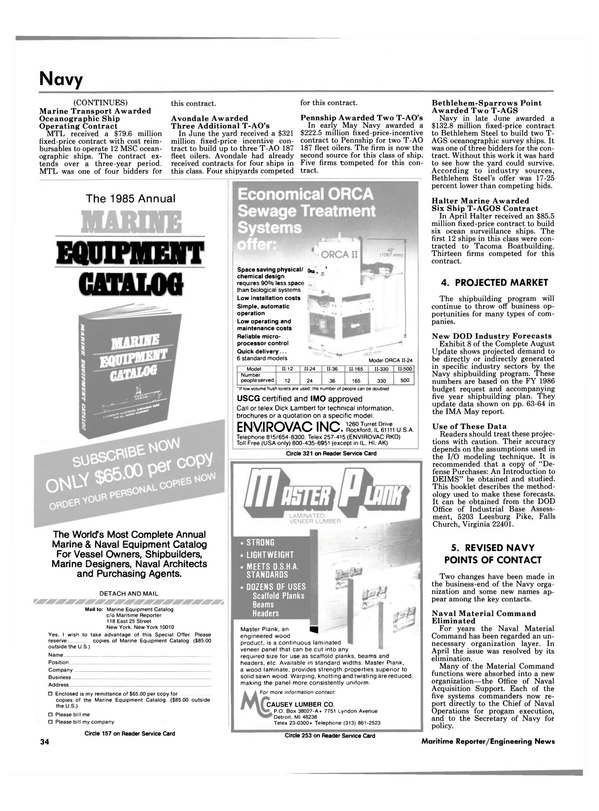