Tyne Shiprepair Limited (TSL), Britain's biggest shiprepair company, has been awarded a multi-million- pound conversion and refit contract by the Ministry of Defence (Navy). The six-month job is to convert the Royal Fleet Auxiliary (RFA) ship Orangeleaf into a Refueling- at-Sea (RAS) vessel, and to continue her annual refit.

The 33,751-dwt tanker was capable of loading and discharging fuel, but was not fitted with RAS equipment.

The contract will be carried out at TSL's Wallsend Dockyards.

The work entails fitting the RAS equipment, fabricating and fitting a 180-ton deck above the main deck, extending the accommodations to provide extra cabins, recreation rooms, and galleys for a total complement of 60, modifying the cargo pipelines, and improving radio facilities.

Some five years ago TSL carried out a similar contract on behalf of the Defence Ministry when the yard converted a 34,000-dwt products tanker into an RFA, a job that also involved the fitting of RAS equipment.

Tyne Shiprepair was returned to private ownership in February 1984 when it was bought from British Shipbuilders by eight members of the Tyne managment team. Since then, RFAs to visit TSL have included the Reliant, the Plumleaf, the Falklands-damaged Sir Tristam that TSL is rebuilding under another multi-million-pound contract, and the Orangeleaf, which docked for two months at an earlier date having the first part of her annual refit carried out.

Another Royal Navy vessel to visit TSL is the HMS Euryalus, a Leander Class frigate that the company is refitting under another multi- million-pound contract at its Middle Docks yard in South Shields. 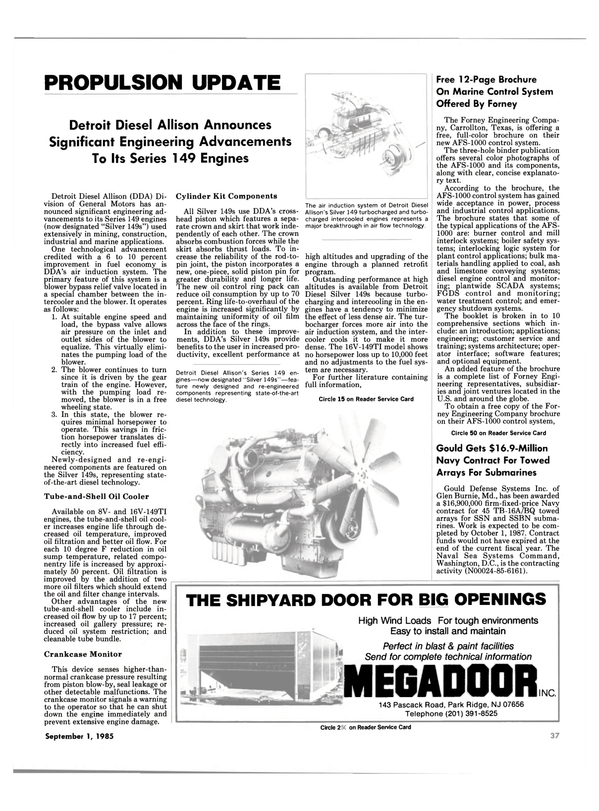