This $5-million vessel, which is described by Otto Candies Jr. as a go-anywhere, do-anything tug, combines conventional and azimute drive technology in one boat.

The triple-screw tug, with outboard Niigata Z-Peller drive units and conventional center line propeller, all in nozzles, will provide Candies with both domestic and international towing capabilities.

Without its house top, the vessel at launching weighed 500 tons. According to Mr. Edwards, a comparable conventional tug would weigh some 150 tons less at this stage. The difference is Ice Class "C" construction and a beefed-up stern, which contribute to both stability and versatility.

This design allows for routine engine maintenance even when carrying payloads by shutting down either outboard engine while running on the center line diesel. In any condition, the vessel can continue under way with excellent maneuvering capability.

With the outboard Z-Pellers in nozzles, the joy stick control may be moved forward, aft, port, or starboard and the vessel will respond almost instantly in any direction.

This system will allow the vessel to handle tremendous loads in the tightest of spots, eliminating the usual need for multiple tugs in many offshore applications.

The towing winch is a Markey TDSDS-36 driven by a GM Detroit Diesel 8V-92 engine. The hydraulic windlass was supplied by Markey.

The fire monitor system includes a 2,000-gpm pump and two monitors— a 1,000-gpm unit with local control and a remote-controlled 1,000-gpm unit. Fuel capacity is approximately 85,000 gallons and fresh water 35,000 gallons. The vessel has accommodations for 14 people. 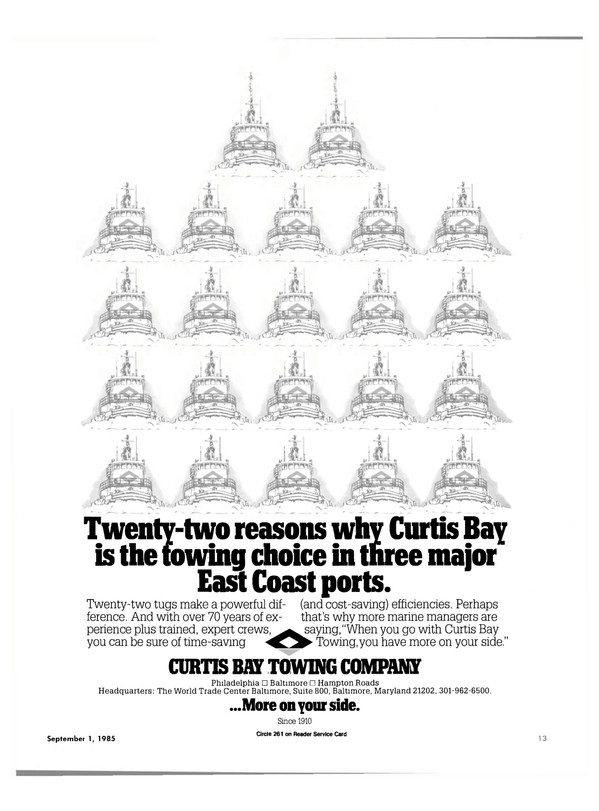