Owing to the adoption of the high-performance "MET-SC" turbocharger which has the same efficiency as the conventional one while using less exhaust gas, it became possible to utilize the surplus exhaust gas to run the radial type gas turbine directly for power generation.

The new system can generate 40 to 60 per cent more power and can cut ships' fuel costs by 2 to 3 per cent when compared to the "Hot-Water Flash Power Generating Plant" which has been so far the most efficient waste heat recovery system at MHI.

Thanks to its increased generating capacity, the Mitsubishi Super Turbo Generating System can supply all electricity demands on board for normal navigation without a diesel engine driven electric generator or an auxiliary boiler backup even when the main engine is running at 55 to 60 per cent of maximum capacity. When surplus electricity is generated, the new system can use its shaft generator as an electric motor to return that surplus electricity to the main shaft as propulsive force. Moreover, the Mitsubishi Super Turbo Generating System requires no restricted space in the engine room, facilitating installation.

MHI developed the D-MAP MARK II, an energy-saving power generating system that recovers the engine's waste heat in steam form, in 1981 and the marine hot-water flash generating plant with 50 to 70 per cent higher generating capacity in 1983.

The latest system is based on these generating systems which have been mounted on numerous vessels. The Mitsubishi Super Turbo Generating System will be mounted on a 258,000-deadweight- ton tanker to be built by MHI for Tokyo Tanker Co., Ltd. MHI expects the epochal new generating system to be used by various ships requiring energy saving. 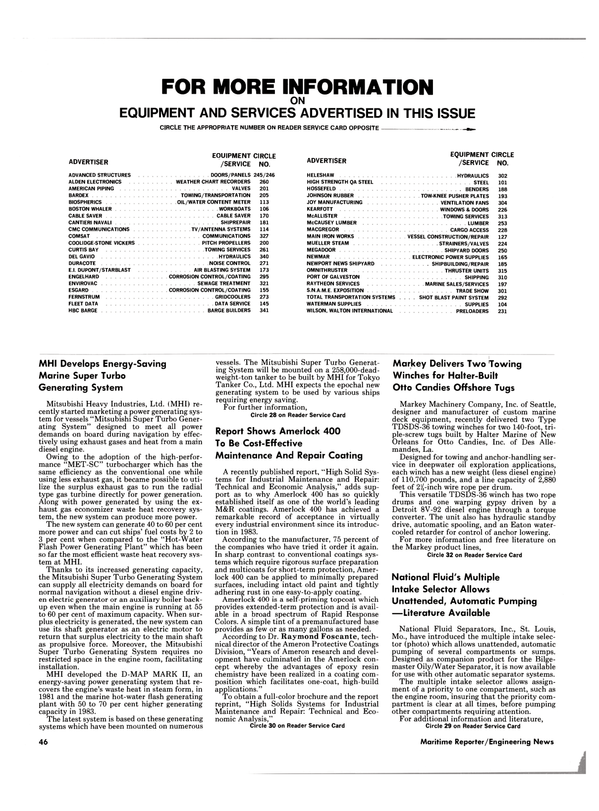