First construction related to Newfoundland's $5-billion Hibernia offshore oil project is scheduled to begin in the first quarter of 1986, it was announced in New York recently by Hal Barrett, Minister of Development and Tourism for the Canadian Provence.

According to Minister Barrett, the Hibernia project offers opportunities for U.S. and other countries.

"Joint venturing is the key to American involvement in Newfoundland," he said. "The international community has already started to enter the local scene, with major offshore players such as Norwegian Contractors and Moss Rosenberg of Norway; McDermott International and Brown & Root of the U.S.; and C.G. Doris of France all entering into agreements to form joint ventures." The first major discovery in Hibernia Field was made in 1979 by Chevron while drilling on Mobil Oil's acreage. This field is said to be the third largest offshore oil discovery made in the world to date, with only two fields in the North Sea being larger. A total of nine wells have been drilled at this site, confirming the existence of a commercially exploitable field of close to a billion barrels of recoverable oil and two trillion cubic feet of natural gas.

The Hibernia Field will be developed by Mobil Oil utilizing a concrete, gravity-based production platform; it is anticipated that oil will start to come ashore by 1991 or 1992. Prior to the production phase, however, an incredible amount of industrial activity is slated to occur.

The concrete base of the production platform that Mobil will utilize in developing this oil resource is so massive that realistically it can only be built in Newfoundland. Such a structure is not designed to be towed a long distance. The entire project is comparable to constructing a 40-story building in a deepwater habor, floating it almost 200 miles offshore in the North Atlantic, and then resting it on the bottom of the ocean.

While there are concrete oil production platforms in use in the North Sea fields, none of those are comparable in size to the structure that will be built for Mobil's Hibernia project. The concrete base of the structure will be about 280 feet high with a diameter at the base of 344.5 feet. It will require 70,000 tons of cement and incorporate some 50,000 tons of reinforcing steel.

The above-water part of the structure, measuring about 300 feet on each side, will consist of three levels—a cellar deck, module deck containing accommodations, and weather deck topped by the drilling rig and helicopter platform. Water depth at the site is 262.5 feet (80 meters).

Of the $5-billion total cost of the Hibernia project, including the development of onshore facilities, some 50 percent is estimated by the Canadian Shipbuilding and Ship Repair Association to be marinerelated.

And this entire project is designed for the development of just one oil field.

There are several other commercial deposits of oil offshore Newfoundland that have been discovered in recent months, including a discovery at the North Ben Nevis Field by a Canadian company, Husky/ Bow Valley Limited. Plans for the development of this field are now being formulated, and oil could be flowing from Ben Nevis as early as 1990 if the company decides to utilize a floating production system.

Several months ago Petro Cana- da, the national oil company, announced a discovery at another field known as Terra Nova. In addition, there are at least seven other commercially exploitable oil fields and several more natural gas deposits that have been identified off the coast of Newfoundland. In the interim, exploration, seismic work, and delineation drilling offshore are continuing apace.

All this offshore activity has spurred a considerable amount of development onshore in Newfoundland, especially in the capital city of St.

John's. At present there are several major construction projects under way in the capital that total close to $100 million. A convention center/ hotel complex is being built, Manufacturers Life Assurance Company has started the first phase of a three-phase office complex, a major Canadian bank is constructing a new office and banking complex valued at approximately $30 million, and another $8-million office building is under construction.

Outside the capital, onshore developments include an $ll-million oil rig servicing facility and the sites being prepared for the construction of the Mobil concrete platform, as well as other major developments either planned or in progress estimated to total approximately $100 million in expenditures.

Almost $100 million has been invested recently in two major marine research establishments in Newfoundland— the $56-million Institute for Marine Dynamics, one of the largest hydrodynamic centers in the world featuring the largest ice tank in the world; and the $42-million Newfoundland Institute of Fisheries and Marine Technology. 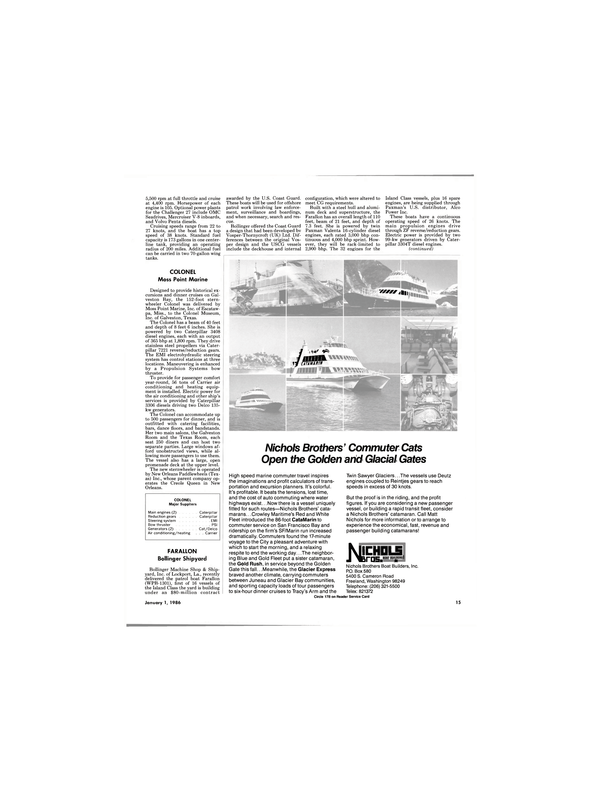 Read $5-Billion Hibernia Offshore Project Will Get Under Way Early This Year in Pdf, Flash or Html5 edition of January 1986 Maritime Reporter