As we enter 1986, marine engineers and shipowners have available the largest selection of diesel engines ever—low-speed, mediumspeed and high-speed machines; two-stroke cycle and four-stroke cycle designs; crosshead-piston and trunk-piston designs; loop-scavenaged and uniflow-scavenaged designs; conventional- and opposedpiston designs. Not only is the available selection broad enough to satisfy the needs of nearly every ship design but the fuel economy available from the modern diesel engine makes it the undisputed choice of nearly every shipowner building or contemplating to build a ship. Even with the depressed state of the marine industry, the international and domestic diesel engine manufacturers continue their aggressive research and development programs.

One of the greatest problems facing both marine engineers and owners contemplating new ship construction is keeping up with the new developments in diesel engines for both main propulsion and auxiliary duty.

With the advent of the super-long stroke and what some may call the ultra-long stroke engines, the engine speed of the diesel engine is as low as 50 rpm at rated power. The upshot of this colossal range of engines available for marine application is that the ship designer can select an engine that will allow him to optimize the vessel design. Power and fuel consumption are not the only variables considered in selecting an engine, for even the largest of ships, but other variables impacting on the economics of the vessel are appropriately considered such as engine dimensions, engine weight and impact on overall system integration and maintenance.

FUEL ECONOMY A few years ago the designers of low-speed engines, responding to the demands caused by the rising fuel prices of the mid-1970s, achieved a significant breakthrough when they developed engines with thermal efficiencies of greater than 50 percent (specific fuel consumption of 125 g/bbp h). The designers of low-speed diesel engines achieved this breakthrough by developing the long-stroke engines with their greater capacity for expanding the cylinder gases and the use of uniflow scavenging. At present, the ultralong stroke engines are approaching stroke/bore ratios of 4:1 and are achieving SFC of 115 g/bbp h. Some medium-speed engine designers have also taken advantage of greater stroke/bore ratios (approximately 1.4:1) to improve the fuel economy of the inherently more efficient, four-stroke cycle engines to a level where it rivals the best of the large bore low-speed engines. Both lowspeed and medium-speed engine manufacturers have adopted more of a systems approach to the configuring of their engine package and have incorporated into their engine packages shaft-geared recovery power turbines yielding SFC of approximately 115 g/bbp h at economy ratings.

FUEL COMPATABILITY Diesel engine manufacturers catering to the needs of the international market have long been aware of the need to have their engines capable of burning low-grade/highviscosity fuels without compromising engine reliability or longevity. In general, they have been very successful on this front. Most manufacturers of marine diesel engines for the international market claim to be capable of burning fuels up to 380- cst viscosity. Some manufacturers claim the engines can burn fuels up to 700-cst viscosity. Several engine manufacturers are researching the potential of using coal/oil and petroleum coke/oil slurries as fuel. One research tack that some of the engine manufacturers are using to make their engines compatible with the poor-quality fuels is the use of ceramics for engine components susceptible to attack by the fuel impurities. The use of ceramic and/ or ceramic-coated parts appears to have the potential to increase the tolerance of the engines to low-quality fuels, especially in high-speed and medium-speed engines.

The manufacturers appear to be well aware of the economic pressures forcing ship operators to complement their vessels with ever smaller crews and are adopting their designs to simplify the maintenance procedures and to lessen the demand for manpower. The use of various types of bolt-stretching devices and specialized removal/assembly fixtures has been common for years and their adaptation to the shipboard maintenance process continues.

UPGRADING OF OLDER ENGINES As the economic climate has forced ship operators to change their mode of operation, sometimes requiring the vessels to be operated at powers significantly below design levels, the engine manufacturers have responded by designing and making available retrofit packages allowing the operator to optimize the existing engine to the new operating conditions. The most encompassing of the retrofit packages available involves replacement of pistons and cylinders among other parts of existing standard stroke low-speed engines to convert them to super long-stroke machines rated at a lower power but with improved specific fuel consumption and a better match between crank/propeller speed and ship hydrodynamics.

Other types of upgrading packages include turbochargers, turbocharger intercoolers and turbocharger bypass systems designed to upgrade the engines to optimize performance at new-load conditions.

ANCILLARY ENERGY RECUPERATION SYSTEMS In attempts to improve on the already phenomenal specific fuel rates of the larger diesel engines and to improve on vessel overall fuel rates, various techniques and systems have been used to recuperate energy from exhaust gases and cooling water. The most common of these systems is the waste-heat boiler supplying steam to turbogenerator and/or to various heating loads aboard ship. With the availability of high-efficiency exhaust gas power turbines, it has become possible to extract significantly more energy from the exhaust gas than can be used by the turbocharge blower.

Various engine manufacturers have adopted the exhaust gas power turbine to supply the excess power back to the engine shaft with improvements of 2.5 to 3 percent in specific fuel consumption. Some marine engineers have opted to use the excess exhaust gas energy to drive or assist in driving an electrical generator.

The following review will highlight the developments of the principal diesel engine manufacturers supplying the marine community with propulsion and auxiliary diesel engines. 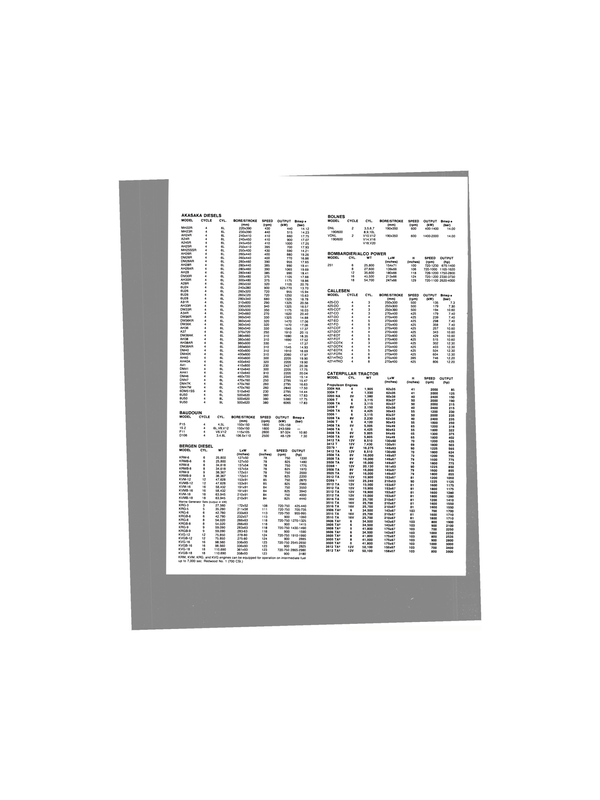