A review of some notable conversions of inland/offshore vessels featured during 1985.

HARVEY TROJAN Avondale-Harvey The Harvey Quick Repair Division of Avondale Shipyards in Harvey, La., during 1985 completed an extensive overhaul and re-engining of the 121-foot oceangoing tug Harvey Trojan. Originally delivered by Halter Marine in 1974 as the Abdon Martin, the vessel is now owned by the Harvey Gulf International.

A major part of the conversion was the replacement of the two original engines with twin Stork-Werkspoor 6SW280 diesels driving fourbladed, stainless steel propellers in Kort nozzles via Reintjes WV3400 reduction gears with a ratio of 5.053:1. The gears were supplied by Karl Senner, Inc. of New Orleans when the tug was built. The overhauled engine controls had been supplied by WABCO Fluid Power, an American Standard company, and the steering system by Sperry/ Vickers.

The entire hull was blasted and painted, inside and out, the stern roller was overhauled, and the bow fenders were replaced. For heavyduty towing jobs in the Gulf of Mexico or worldwide, the tug is fitted with an Intercon 225 double-drum towing winch with a bollard pull of 280,000 pounds. Other deck equipment includes an HBL anchor windlass, Carlisle & Finch searchlights, and Kahlenberg air horn. Fuel oil capacity is 120,000 gallons and potable water 15,000 gallons.

In addition to the new SWDiesel main engines, the vessel has two 100-kw generators driven by Detroit Diesel 8V-71 engines. These units were supplied by George Engine Company of Harvey.

Each pump can transfer 850 barrels per hour. Bender also carried out routine drydocking and repairs for the two supply boats.

Besides its well-known new-construction capabilities, the Mobile yard is a leading ship repair facility, with three floating drydocks capable of lifting up to 18,000 tons.

COLUMBIA/AMERICAN BEAUTY Marco-Seattle As a result of the move to trawling in the North Pacific fishing fleet, two of 1985's more complete conversions were performed by the Marco- Seattle shipyard. A pair of Marcobuilt combination crabbers built in 1979, the 122-foot Columbia and the 123-foot American Beauty were modified extensively for their new fisheries roles.

Along with extensive hydraulic and electrical systems work and power supply changes, other equipment added included a Rapp net sound winch, Pullmaster haulback winch and two gilson winches, and an aft-facing console added to the pilothouse with controls for the entire trawl system.

In addition to having much of the same hull work performed, the American Beauty was fitted with two Rapp TWS-i220 trawl winches and the Autohaul system, Rapp new sound winch, two Gearmatic gilson winches and a Gearmatic inhaul winch.

During the break-in period of the first vessel to be repowered, the San Francisco, the Ferry Division found "dramatically improved performance" from the dipe.°l-powered boat, leading to savings i., commuting time as well as impressive dollar savings. These savings are being achieved despite a reduction in propulsion power from 7,500 shp with the original gas turbines to 3,100 bhp with the diesels. Reliability is said to have been 100 percent, and the noise level as low as it was with the gas turbines.

Fuel savings have already met the goals set for the repowering, and overall performance has exceeded expectations. Hourly full-power fuel consumption has averaged 170 gallons with the two diesels and one genset; the original gas turbines burned 500 gallons per hour. Cruising speed has met the boat's design speed of 20.5 knots, surprising in view of the great reduction in horsepower.

A critical demand has been that ferry service be increased to meet anticipated gains in ridership, and that the Ferry Division's high level of on-time departures and landings be maintained. The markedly improved performance of the boat at slow and intermediate speeds, the result of conversion from waterjet to propeller drive, is paying off in terms of time saved during dockings and departures, and has added an important margin of safety to ferry operation.

In order to convert from the waterjets to propellers, a five-foot extension was added to the stern of each ferry to house rudders and steering mechanism. This slight increase in the waterline length of the 165-foot vessels also contributed to maintaining the original design speed. 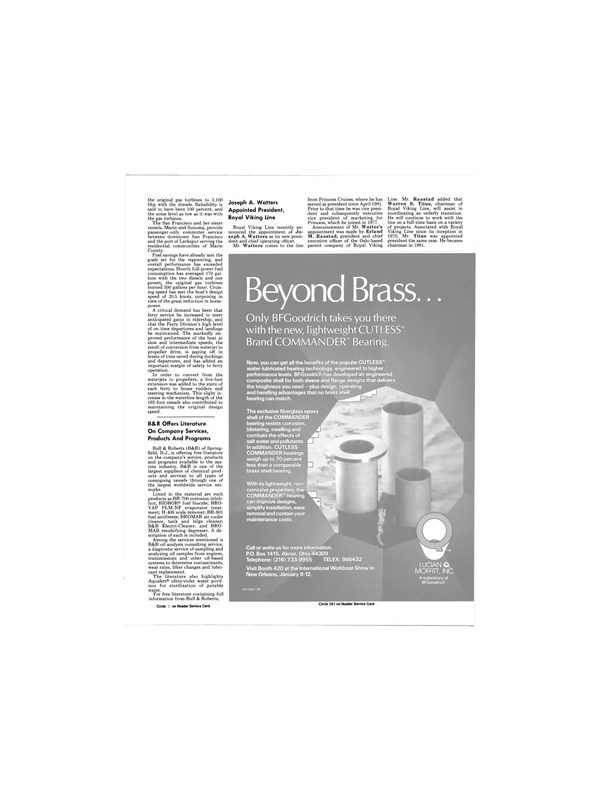