Eastern Marine Developing One Of Three Facilities As Offshore Supply Base

Eastern Marine, Inc., the Panama City, Fla., shipbuilding firm, has announced plans to develop one of its three facilities as an offshore supply base. This move was stimulated on account of the increasing offshore exploration activities in the Gulf of Mexico off Florida's Northwest Panhandle Region. Eastern Marine's proposed facility consists of a 10.5-acre prime, centrally located tract, which is a peninsula bordered by water averaging 14 feet in depth.

This strategic location is just minutes away from the Intracoastal Waterway, and six miles from the Gulf of Mexico Jetties. Major highways and rail facilities are also located nearby. Plans are currently in motion to develop an extensive bulkhead system and dock loading area which would extend for more than 1,000 feet in length, and could support numerous offshore support vessels, crewboats and barges.

In addition, facilities are now existent with a multilevel office building, warehouse, loading dock, and small vessel repair operation. Brian D'Isernia, president of Eastern Marine, Inc., has conducted a study with several oil companies, and service- support groups, and indicates that there is a great deal of interest for a "one-stop" supply base, providing fuel, water, drilling fluids and equipment, tubulars and personnel lodging and transfer facilities. Eastern Marine's proposed supply base would provide all the necessary requirements, and in addition the area could also be utilized as a helicopter base. 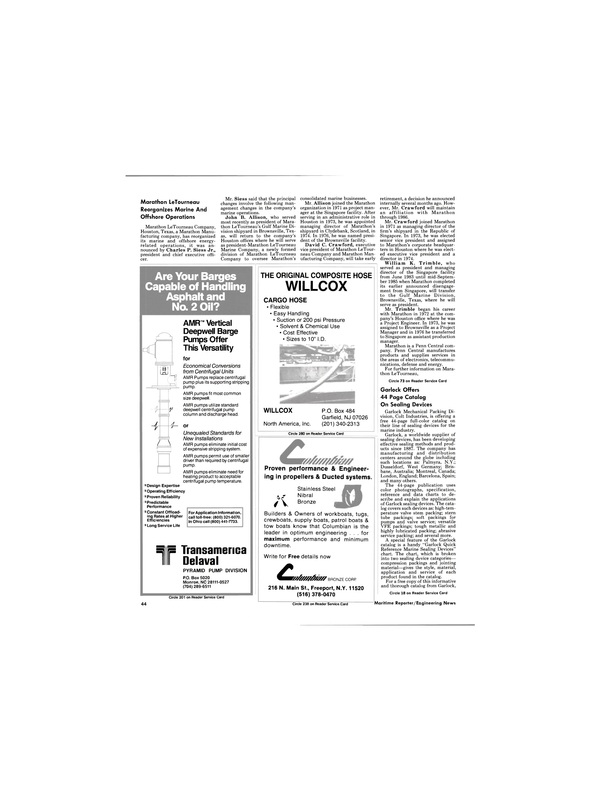 Read Eastern Marine Developing One Of Three Facilities As Offshore Supply Base in Pdf, Flash or Html5 edition of January 1986 Maritime Reporter