U.S. Yards Could Gain $ 6 . 6 Billion In Retrofit Work The Congressional legislative battle over double-hull/double-bottom tankers appears to be drawing to a conclusion. According to reports, House and Senate conferees are currently working on compromise legislation as part of the pending oil spill liability and compensation bill which would gradually phase-in double hull tankers starting in 1995.

The compromise differs from the current proposal by the House of Representatives, which would make double hulls mandatory on oil tankers calling at U.S. ports by the year 2005. The House proposal would also require all new construction tankers to be built with double hulls, effective on the date that the legislation is enacted. Inland barges would be required to be built with double hulls by 2015, while existing barges would have until that time to be retrofitted.

The Senate version, on the other hand, provides the administration with much more freedom in determining which ships would be required to have double skins and when the legislation would be implemented.

The Bush Administration, which, for quite some time, resisted the inclusion of mandatory doublehull tanker legislation as part of the oil spill bill, recently announced its support for a gradual phase-out of single-skin tankers beginning in the year 2000.

"The administration generally supports requiring double hulls on new construction of oceangoing tank vessels, if consistent with the findings in the National Academy of Sciences report that double hulls are safe and afford a better protection to the environment than other design features. We believe that existing single-skin, oceangoing tank vessels should be phased out after they are 25 years old (beginning in the year 2000)." According to Mr. Skinner's letter, the phase-out would also include single-skin vessels utilized in lightering operations in the U.S.

However, the administration did provide an exemption for vessels operating at deepwater ports.

Secretary Skinner said in his letter: "On the basis of the Louisiana Offshore Oil Port's (LOOP) distance from land and excellent record, we do not object to an exemption for vessels servicing a deepwater port licensed under the Deepwater Port Act of 1974, until the year 2015, provided that such an exemption would end when and if before that date an international doublehull standard is implemented." With regard to tank barges servicing the inland waterway system and tank vessels operating exclusively on the Great Lakes, the administration supports double-hull requirements beginning in 2015. The administration based its decision on the fact that freshwater vessels have generally longer service lives than oceangoing vessels. The administration sees this as an inducement to owners to build only double-hulled inland barges and Great Lakes tank vessels.

If mandatory double-hull legislation is passed by the government, it would be a tremendous boost as well as a challenge to U.S. shipyards.

Based on API projections, the 153 U.S.-flag tankers could be retrofitted at a total cost of $4.6 billion, while the cost of retrofitting the some 1,800 tank barges operating in U.S. waters would be about $2 billion.

In addition, since the legislation would affect all tankers entering U.S. ports, between 400 to 500 foreign flag ships would also have to be retrofitted. The cost of retrofitting these vessels, according to API, would be about $10 billion.

The $16.6 billion cost of retrofitting does not include any new tanker or tank barge construction. 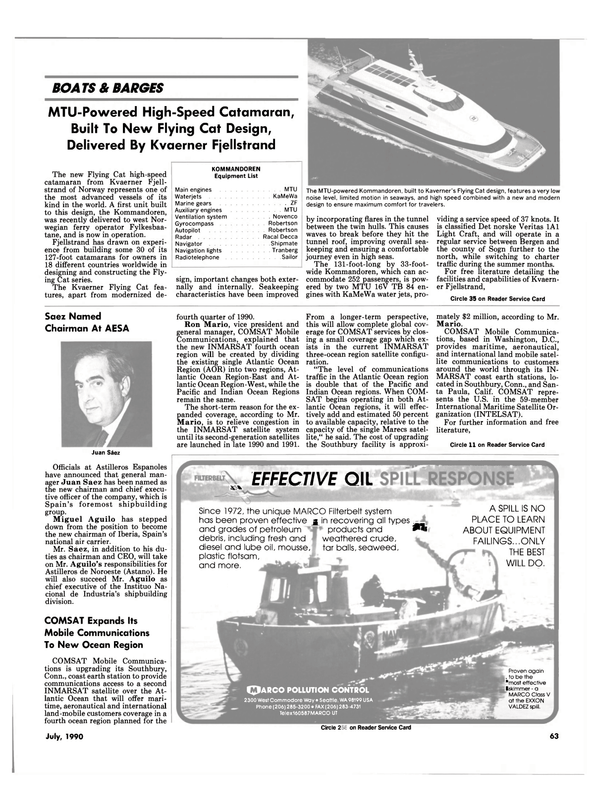