The Canadian Department of Fisheries and Oceans, following extensive trials of the Swath Ocean® vessel Frederick G. Creed in the North Atlantic this past winter, has released a report which strongly endorses employing the swath vessel in hydrographic survey, economic zone patrol and oceanography roles.

In a paper recently presented to Hydro USA 90—an international body of hydrographers at Norfolk, Va., sponsored by the U.S. National Oceanic and Atmospheric Administration (NOAA) and The Hydrographic Society of America—the Canadian authorities concluded that the 80-ton aluminum vessel, of the small waterplane area twin hull type, "permit the collection of bathymetric data at an unprecedented rate even in poor sea conditions." In assessing overall performance, the Canadians found that in contrast to all vessels they had previously em- ployed, the Swath Ocean 2000 Class vessel was "smaller in displacement, faster, operated by a smaller crew and operated more efficiently in deteriorating sea conditions, resulting in a much larger operational weather envelope." The Frederick G. Creed was designed and built by Swath Ocean Systems, Inc., of Chula Vista, Calif., launched October 1989, and is the fourth in its series of swath vessels.

She is approximately 67 feet in overall length, 32 feet in beam, draws 9.5 feet and has a top speed of 25 knots with a cruising speed of 21 knots.

From December 1989 to the present, she has been operated under charter and evaluated in a joint U.S./Canada Hydrographic Commission project.

Canada is now in the process of buying the vessel.

In the keynote address to the symposium—with an audience which included the top-ranking hydrographers of the Canadian, Fiji and Norwegian Governments and of the American, Argentinian, Dutch, Indian, Italian and Peruvian navies— newly appointed U.S. Under Secretary of Commerce (for Oceans and Atmosphere) John A. Knauss made an unusually strong prediction about how swath vessels like the Creed would support advanced mapping technologies such as global position systems (GPS) and multibeam systems: "Most expect that modern sonar technology coupled with the accuracy of GPS, all used aboard small, but highly stable swath vessels, the results fed directly into computer derived 'boat sheets', will soon produce a revolution in charting efficiency and effectiveness even more spectacular than S w a t h Ocean S y s t e m s of Chula Vista, Calif., is those generated by . . . systems introduced after World War II." Swath Ocean have production affiliates in the U.S., Canada and in Europe and currently market the 2000 Class vessel for use in hydrographic survey, patrol, light oceanography, marine pilot and small passenger carriage roles. Swath Ocean also have a high-speed all-passenger ferry with 30-knot/450-passenger capacities and a steel-hulled RO/RO ferry able to carry 500 passengers and 125 cars at a loaded service speed of 36 knots. 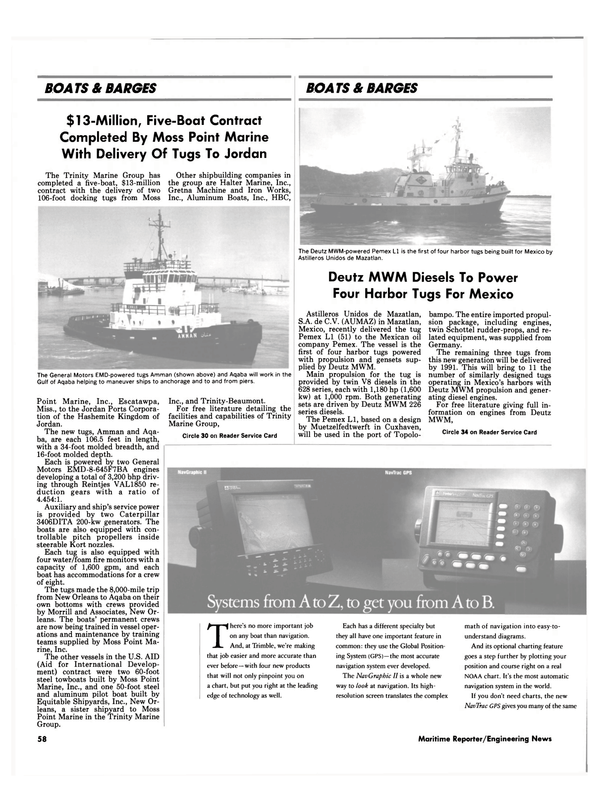