The announcement was made by John Dane III, president of the Trinity Marine Group, B.A. Adams Sr., president and CEO, Luke L. Guarisco, chairman of the board, and Peter V. Guarisco, director, all of Oil & Gas Rental Services at Halter Marine, Inc., in Lockport, La.

Mr. Dane said that the contract is significant "because these new supply boats will be the first of their type designed and built from the keel up, since the downturn in the offshore industries in the early 80s.

To my knowledge, there has not been an all-new supply boat built in the U.S. since Moss Point Marine, Inc., one of our companies, built seven of them between 1983 and 1985." The new boats, priced in excess of $5 million each, will extend the current construction backlog at Halter- Lockport an additional 14 months and will create a need for about 75 more shipbuilders in all crafts.

According to Mr. Dane, the multiple contract is a harbinger of better things to come since it indicates the oversupply of older support vessels has been reduced significantly, creating a need for new boats, and increased shipbuilding employment.

The owners said these boats represent a new generation of supply boats as each of the identical boats will have increased capacities for liquid and dry drilling muds and other supplies required for offshore exploration and drilling. The design and specifications for the new vessels is a joint effort of Trinity Marine's engineering staff and William H. (Bill) Hidalgo, vice president and general manager of Oil & Gas Marine Service.

The new boats will be built to U.S. Coast Guard standards under sub-chapter "I" cargo and miscellaneous vessel for offshore oil and mineral industry, full ocean, under 500 gross tons. They will also be built in accordance with the American Bureau of Shipping, and will be certified AMS Full Ocean. Construction of the first boat will begin immediately and all three vessels are expected to be delivered by June 1991.

In related news, a second U.S.

For complete literature describing the full line of services offered by the Trinity Marine Group, Circle 125 on Reader Service Card 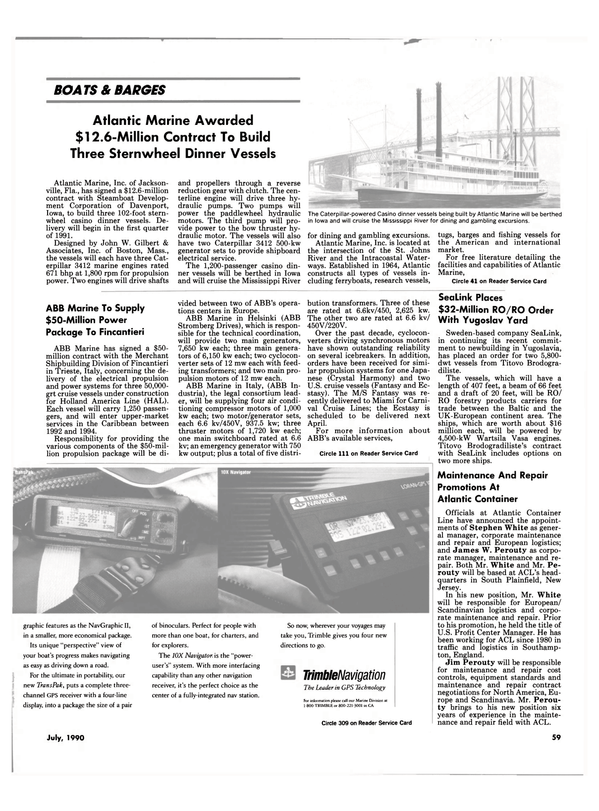