California-based Willard Marine Inc., a leading manufacturer of fiberglass planing-hull and rigid inflatable boats for the U.S. Coast Guard and U.S. Navy for over 30 years, will introduce its new SOLAS- approved 18-foot Rigid Inflatable Boat, or RIB, at the New Orleans Work Boat Show in November.

The new RIB is a smaller version of its 24-foot RIB which the U.S.

Navy is using to replace many of its 26-foot whaleboats aboard various U.S. naval ships.

Like the 24-foot version, Willard Marine's newest RIB is an open craft with a rigid fiberglass hull and a rubberized inflatable collar. The 18-foot RIB is powered by a Kodiak 3.3D diesel marine engine which develops 98 horsepower coupled to a Kodiak 120 Waterjet drive. It can carry up to eight people or a medium size load.

In comparison, the 24-foot RIB is powered by Cummins' 6BT5.9-M in-line, six-cylinder turbocharged diesel which develops 210 horsepower and is coupled to a SternPower 113E126LL stern drive. The 24-foot RIB can carry up to 18 people.

"We're very excited about our 18- foot RIB," said Bob Pearcy, president of Willard Marine, who explained the reasoning for the smaller RIB: "We've seen great success with the 24-foot RIB and felt there was a need for a lighter, smaller rescue craft that was even easier to transport but shared the same stability and safety features as the larger craft. We take pride in the fact that Willard Marine builds the only U.S.-made RIB that's SOLASapproved." Over the years, Willard Marine has constructed several vessels for the Coast Guard, including fifty-six 32-foot ports and waterways boats for harbor patrol and firefighting, and 22 smaller, selfrighting craft for ocean surf rescues.

Willard Marine's boats are used at naval and Coast Guard installations throughout the country.

Willard Marine's RIBs are constructed with high-quality fiberglass and an inflatable collar that is mechanically fastened to the hull. The collar is constructed of heavy polyester- weave fabric and has a neoprene- hypalon coating for extra durability.

"The Coast Guard has found them to be excellent rescue craft," Rod Swift, vice president of Willard Marine pointed out. "They're light and can easily be transported by aircraft or trailered to a rescue or oil-spill site. They're very stable as a work platform because of the buoyancy collar, and the soft gunnels prevent victims from becoming injured during open sea rescues." Besides its use by the U.S. Coast Guard, Willard Marine envisions two primary commercial applications for its RIBs in the future.

First, for marine rescue operations performed by municipalities, and the offshore oil industry, and second for rapid responses to oil spills. 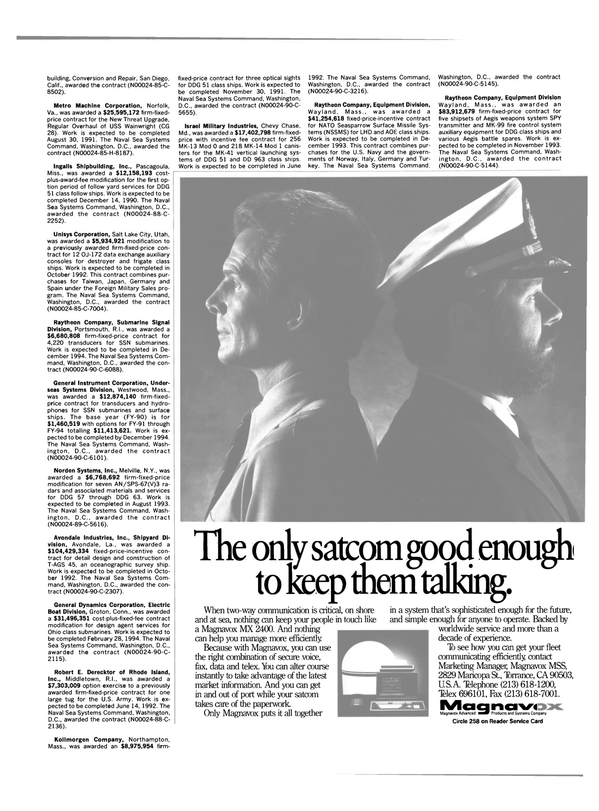