The proposed rule would amend the marine casualty reporting requirements by adding "significant harm to the environment" to the list of reportable marine casualties. This proposed change would implement a change in law enacted as part of the Oil Pollution Act of 1990 (OPA 90), it would apply to domestic vessels worldwide, to foreign vessels operating in the navigable waters of the United States, and to foreign tank vessels operating in the U.S. Exclusive Economic Zone (EEZ) and other waters subject to the jurisdiction of the United States.

Background Before this change in the law was enacted as part of OPA 90, the Coast Guard was not authorized to investigate a discharge or threatened discharge of oil, hazardous substances, marine pollutants, or noxious liquid substances (NLS) under its marine casualty investigation authority (46 U.S.C. 63 and 46 CFR part 4) unless certain conditions existed. The Coast Guard could act only if the discharge or threatened discharge resulted from a grounding, collision, or another incident involving death or serious injury to an individual, material loss of property, or material damage affecting the seaworthiness or efficiency of the vessel. Also, before OPA 90's enactment, foreign vessels were not required to report marine casualties that occurred beyond the U.S. territorial sea.

OPA 90 Changes Section 4106 of OPA 90 altered this by making specific changes to the Coast Guard's authority. First, it added "significant harm to the environment" to the list of marine casualties (46 U.S.C.

6101(a)) that must be reported to the Coast Guard. Further, section 4106 not only increased the scope of reportable marine casualties, but it also amended the law (46 U.S.C. 6101) to require foreign- flag tank vessels to report certain marine casualties in the EEZ. The OPA 90 amendment requires foreign tankers to report "material damage affecting the seaworthiness or efficiency of the vessel" and "significant harm to the environment" in waters subject to the jurisdiction of the United States. However, the amendment states that this new reporting requirement applies to foreign tank vessels only to the extent consistent with generally recognized principles of international law." Coast Guard Rulemaking The principal task for the Coast Guard in implementing these two OPA 90 amendments was to define in regulations the meaning of "significant harm to the environment." The Coast Guard's NPRM defines "significant harm to the environment" as a discharge that, if it occurred in the U.S. territorial sea or other U.S. navigable waters, would be in violation of the Clean Water Act. In the preamble to the NPRM, the Coast Guard explains that under the Clean Water Act, the Coast Guard is authorized "to ensure the effective and immediate removal of a discharge, and mitigation or prevention of a substantial threat of a discharge, of oil, hazardous substances, marine pollutants, or NLS into or on the navigable waters of the U.S., or into or on the waters of the U.S. EEZ." From this, the Coast Guard concludes, "it is reasonable to infer congressional intent that the Coast Guard be notified any time there is a discharge or a substantial threat of a discharge into or on the navigable waters of the U.S. or EEZ in order to ensure the effective and immediate removal and mitigation or prevention of a discharge or substantial threat of a discharge." The Coast Guard NPRM preamble goes on to point out that "most foreignflag tank vessels" are already required to comply with the reporting requirements of the International Convention for the Prevention of Pollution from Ships, 1973, as modified by the Protocol of 1978 (MARPOL 73/78). In the NPRM the Coast Guard equates "the term 'substantial threat of a discharge' to the term 'probable discharge' as used in the MARPOL 73/78 Convention." Therefore, the NPRM proposes to permit a report under MARPOL 73/78 of discharges or probable discharges to satisfy the marine casualty reporting requirements of U.S. regulations (46 CFR part 4). However, marine casualty reports under those regulations will not satisfy the requirements of MARPOL 73/78 because the prescribed criteria and reporting requirements of the marine casualty regulations are not stringent enough.

The proposed rule would revise the regulations on marine casualties and investigations and the regulations (33 CFR part 151) implementing the Act to Prevent Pollution from Ships (APPS), which provides the reporting requirements for MARPOL 73/78. The revisions of the APPS regulations reflect a 1991 amendment to APPS and the ratification of Annex III of MARPOL 73/78.

Conclusion This regulatory effort by the U.S.

Coast Guard has the surface appearance of being somewhat routine and merely a long overdue implementation of an OPA 90 mandate.

However, weaving the changes made by OPA 90 into the fabric of existing national and international law has proven to be tricky on more than one occasion. Care should be taken to examine the changes proposed. Thus, both domestic and foreign vessel owners and operators should take heed of this notice to ensure that unintended burdens or requirements are not imposed. Comments are due on or before January 31, 2001. 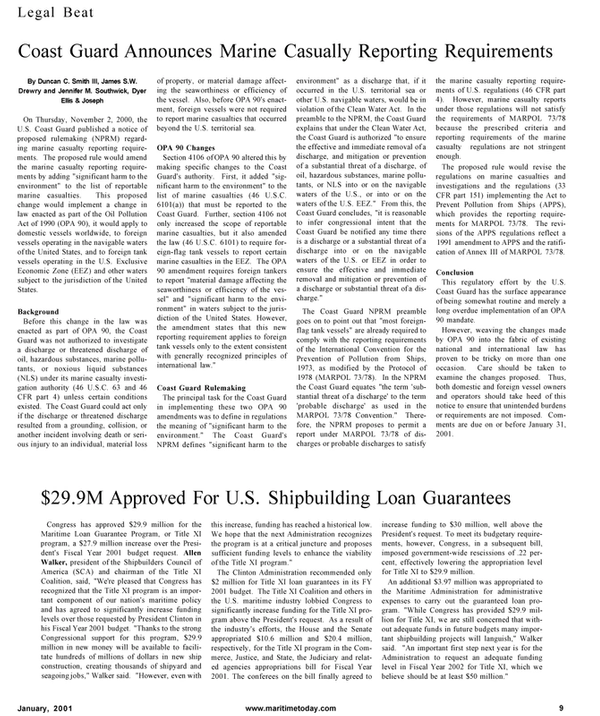