The impact of increasingly stiff rules from legislators regarding ship engine emissions combined with ever increasing demands from ship and boat owners of better life-cycle performance andfuel economy has placed the onus squarely upon the diesel engine manufacturing community to continuously improve products and systems.

While the diesel engine community has responded in kind with a variety of enhanced designs and concepts (see Carnival Spirit story, page 50), there is a revolution spurred by evolution brewing in academia which promises to, at the very least, arm diesel engine makers with a system to quickly and cost effectively optimize current diesel engine performance, and to possibly even help to reshape the diesel engine's inner and outer appearance in the name of improving performance.

A Design For The Ages Developed by Paris-born Rudolf Diesel, the diesel engine today — despite numerous refinements, enhancement and improvements — remains very similar to the prototype produced in 1893.

The diesel engine is a timeless power unit that used the newly discovered principles of thermodynamics as a potential replacement to the then efficient gasoline engine. In 1885, Diesel set up his first shop-laboratory in Paris and began his 13- year process of inventing the engine that would bear his name. At Augsburg, on August 10, 1893, Diesel's prime model, a single 10-ft. iron cylinder with a flywheel at its base, ran on its own power for the first time.

Diesel spent an additional two years improving the original design, and on the eve of 1897 demonstrated a model that boasted a theoretical mechanical efficiency of 75.6 percent, as opposed to the prevailing efficiency of the steam engine of approximately 10 percent or less.

On January 28, 1898, B&W acquired the rights to use the patent of Diesel. The first engine was delivered by the company in 1904 to N. Larsens Vognfabrik in Copenhagen to produce electricity for lighting. The engine type was a DM140, i.e. a one cylinder with an output of 40 hp at 180 rpm. The cylinder diameter was 320 mm and the stroke was 490 mm. The demand for diesel engines in marine applications quickly grew, and circa 1909 B&W engineers developed a reversing mechanism, which enabled the engines to run in both directions. The following year, diesel engines were being built for the world's fist oceangoing motorship, M/S Selandia.

Survival of the Fittest Improving upon Rudolf Diesel's initial design has been non-stop work, and in recent years much effort and countless millions of dollars have been invested to enhance performance and reduce emissions.

Legislation demanding lower emissions and customer demand for more sturdy, fuel efficient products have been the primary drivers of diesel engine development, with the former having more tangible and immediate impact.

The process of simulating diesel engine designs via computer is hardly a new development, as various levels of research, development, and testing have been deployed by engine makers for many years. But the specter of focusing on the entire engine, specifically tweaking any given number of factors while seeking the optimum performance parameters that cuts emissions while improving fuel economy and life-cycle performance, among others, was a process that — in real world trials could take practically forever — and in the computer lab could quickly clog even the most prolific of machines.

Scientists at the University of Wisconsin have developed what they believe to be the best approach.

Using the recently developed KIVAGA computer code, the researchers are performing full-cycle engine simulations within the framework of a Genetic Algorithm (GA) global optimization code. In short, Dr. Rolf D. Reiz and his colleagues have devised a computational computational design methodology for the optimization of internal combustion engines with respect to a large number of parameters (injection timing, injection pressure rate-shape, combustion chamber design, turbocharging, etc.) The interesting aspect of the study, which it should be noted has currently only been conducted for diesel truck engines, is that it combines computer technology with Darwin's Theory of Evolution. Genetic Algorithms — which have been successfully applied to design problems ranging from laser systems to reinforced concrete beams — are global search techniques based on the mechanics of natural selection, combining a "survival of the fittest" approach with some randomization and/or mutation. For the purpose of diesel engine optimization study, "mutating genes" can be thought of as tweaking the variables. In the study, the machines literally competed against one The results recorded reported and confirmed in a real-world test showed significantly (approx. 15 percent) less fuel consumption than the baseline engine, with 70 percent less NOx and 50 percent less soot.

another, with the strongest surviving and serving as the basis for future generation designs. The process was repeated until the evolutionary winner, which optimized fuel efficiency and performance while cutting emissions, emerged. Ordinary GA's demand hundreds of "organisms" to be evaluated in each generation, but given the time consuming process of evaluating the diesel engine cycle, the researchers needed a better, more time-efficient way to test and evaluate. The present study uses Micro-Genetic Algorithm, which operates similarly in that it works on a family, or population of designs, yet it allows for a very small population size. For example, in a recent study, the design factors tested include: boost pressure, EGR Level, Start of Injection, Injection Duration, Mass in First Pulse and Dwell Between Pulses. The results recorded, reported and confirmed in a real-world test showed significantly (approx. 15 percent) less fuel consumption than the baseline engine, with 70 percent less NOx and 50 percent less soot. The present methodology provides a useful tool for engine designers investigating the effects of a large number of input parameters on emissions and performance 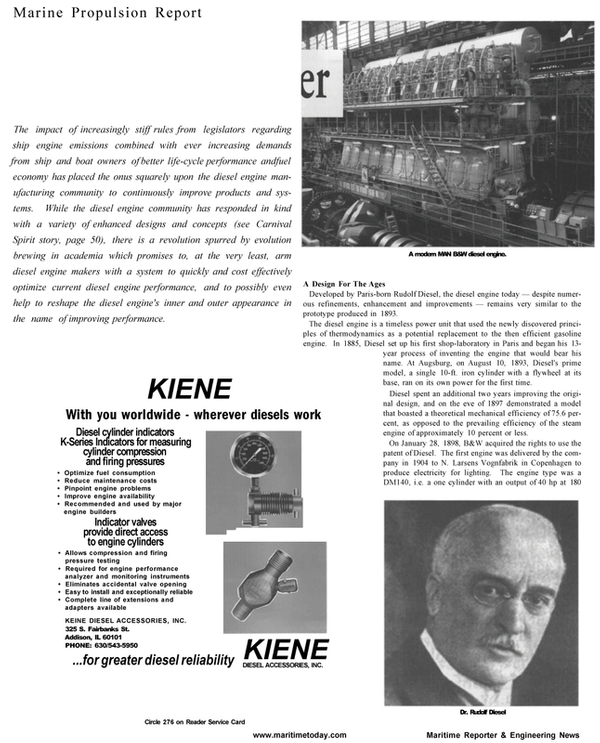