In fostering a sleek new breed of RoPax ferry for Cretan operator Minoan Lines, Sestri Cantiere Navale has reached an important stage in its transition from a role as a versatile builder of mercantile vessels to a dedicated constructor of cruise ships.

The 1999 delivery of the 40,000-gt Italian cruise ferry Excelsior gave a measure of the Sestri yard's latent skills in passenger-carrying tonnage. However, the 37,000-gt Knossos Palace, the first in a series of four Minoan ferries from the Fincantieri subsidiary, confirms its drive towards ultimate specialization in the high-technology, capitalintensive domain of cruise vessel production.

Readers of a certain age and memory might recall Sestri's earlier, major contribution to Genoese knowhow in passengership design, construction and operation, an era which ended with the completion of the stylish Italian liner Michelangelo in 1965. Gracing Genoa's industrial waterfront immediately prior to her November 25 handover, Knossos Palace is a modern testament to the Fincantieri group's emergence as a world-leading force in the building of cruise ships and the larger types of RoPax ferry.

The completion of a further three, exceptionally fast RoPax ferries for Minoan will leave Sestri wholly-focused on cruise vessels, commencing with a pair of 105,000-gt newbuildings for Carnival Corp.'s Costa Crociere.

Sestri's re-orientation, a process, which will be supported by expenditure in excess of Lire 100-billion on yard reequipping, will strengthen Fincantieri's hand among a world elite confident of sustained growth in the cruise business.

With Genoa-Sestri's capacity augmenting that of the Monfalcone and Venice- Marghera establishments, nominated centers for cruise ship construction; Fincantieri will have the extra muscle to raise its game. 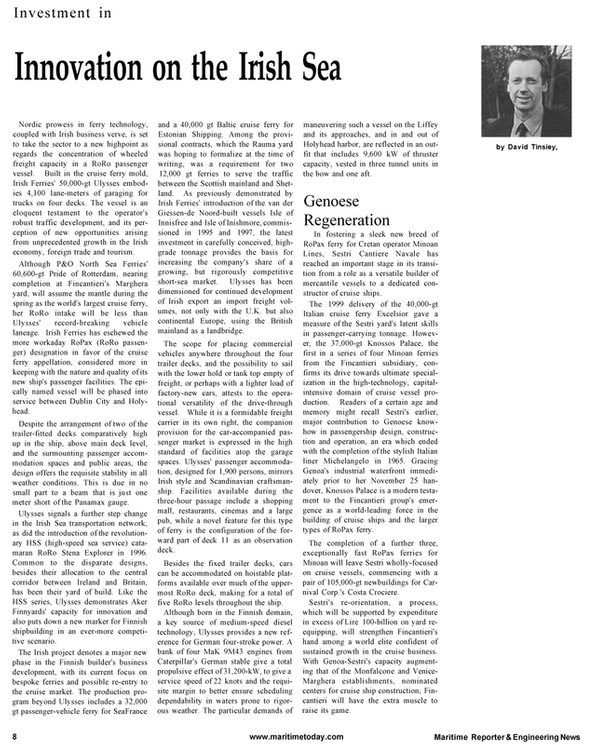